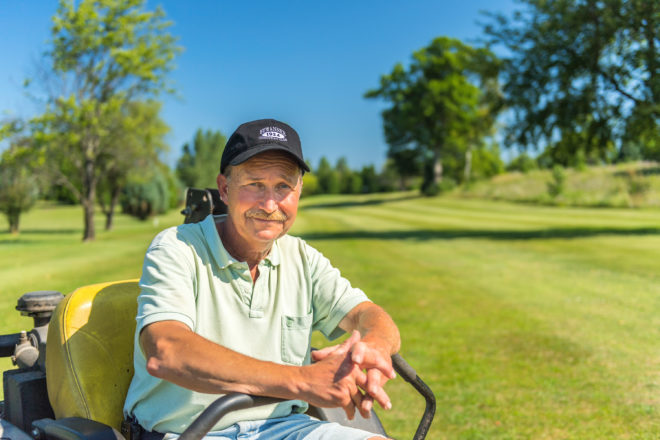 Constable Mark Merrill is a familiar face in Baileys Harbor. After 33 years as a constable and 26 as a road deputy, he’s spent his fair share of time on his law enforcement career. What isn’t widely known about Merrill, though, is he’s been a greens superintendent for almost 40 years.

Born in Chicago, Merrill moved up to Baileys Harbor in 1978 to accept a position as an assistant greenskeeper at Maxwelton Braes Golf Course. That winter, then-superintendent Gordon Brann died from a heart attack, and 21-year-old Merrill was given the position. He would remain greens superintendent at Maxwelton until 2002, when he accepted the superintendent position at Stonehedge, a nine-hole, 2,100-yard course east of Egg Harbor. He remains the superintendent today, managing the grounds in the morning before suiting up for his day job as constable. In both careers, Merrill remains the man behind the scenes, making sure everything is running well.

Though he says he doesn’t have enough time to keep up with much of the golf world these days, he remains dedicated to his position. Here he is, speaking for himself.

Zach Jaeger (ZJ): Having two careers must be difficult to manage at times, especially when you’re always on call for the town. Do your two schedules ever conflict?

Mark Merrill (MM): Not as much as you’d think. The greenskeeping job starts extremely early in the morning. All the lawn mowers have headlights on them. If there’s an emergency or something, then I just leave and come back again.

ZJ: What’s changed over the years in grounds management?

MM: Things were done a lot differently back then [when I started at Maxwelton Braes]. The equipment wasn’t as modernized…the equipment’s a little more efficient now than it was years ago.

ZJ: So you couldn’t choose between the two jobs, and decided to do both?

MM: Basically, yes. I have enough time to do both. [As] the constable, I’m an elected official. I hold office by popular vote, I’m not hired help. And it’s not full-time work. It’s full-time, part-time work…you’re always around, you’re always subject to call. Most of what you’re doing is spontaneous, you know, emergencies and that come up spontaneously. You set aside what you’re doing, take care of that, and then go back to doing what you were doing before.

ZJ: Do you have a favorite golf player?

MM: Not anymore. I’m an old guy and the generation I grew up with pretty much doesn’t play any more. [Players these days] hit the ball tons further than the old guys used to. The equipment’s so much better, and I think they do a lot more working out…they approach it much more like a business; they approach it almost scientifically, I’d say.

ZJ: How about from back in the day?

MM: Jack Nicklaus and Tom Watson. They were gentlemen. They conducted themselves well on the course and off the course. They were very good players and had good swings…they were good, hard players.

ZJ: Tell me about working at Stonehedge.

MM: Jon’s [Oswald, owner] a wonderful person to work for. He’s a great guy. Stonehedge is a very nice course…It’s a lot of work for one person, but one person’s about all you need to cover the ground, as long as you stay with it.

ZJ: What are your favorite parts of being a greenskeeper?

MM: It’s a lot of work. You’re outdoors, of course. You get to see the sunrise every day, as long as it’s not raining. Of course it has its downsides – you can be out there in the rain, out there in the cold, out there in the fog. It’s not all roses, believe me, but you get used to it. It’s a way of life.