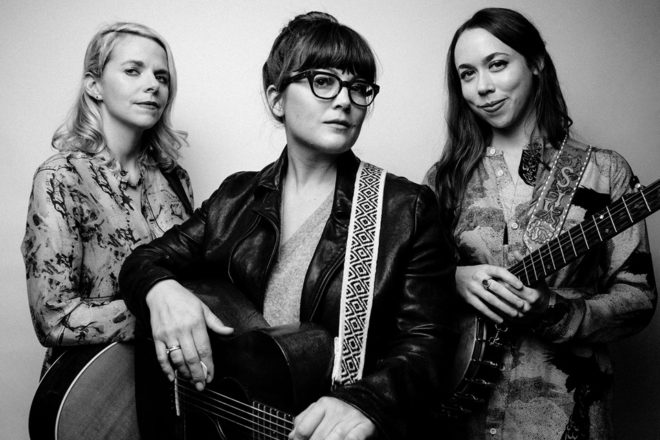 I’m With Her is a trio of acclaimed songwriters coming July 12 to DCA. Photo courtesy of I’m With Her.

Somewhere deep in the bowels of the Door Community Auditorium (DCA) is a master list of acts that are wanted or have been suggested by board members, donors, sponsors, ticket holders and the public.

“We have a list of, I think it’s around 1,000 names right now,” said DCA Executive Director Cari Lewis. “There are probably 100 or 200 of those names that are either too big – they only play stadiums of 10,000 seats – or maybe great artists but only 50 people would come to see them.”

Lewis and the Programming Committee walk a delicate balance in trying to fill a season with acts that will appeal to every demographic in the community.

“There’s not a real formal process for our committee,” said Bryan Nelson, co-chair of the Programming Committee. “We have people who love music and want to see it come here. We have to balance what sells with everything else.”

Nelson said the programming committee – “There are about a dozen of us” – holds its first meeting for the new season in August, while the current season is still in session.

“By then we have a pretty good idea of how this season went,” he said, which informs their brainstorming sessions for the next season.

The members bring in new ideas, as well as championing names already on the list.

“At that August meeting, we bring up maybe 80 names, some new and some recurring. Bonnie Raitt has been on the list forever, but let’s make sure she stays at the top,” Nelson said. “Thor [Thoreson, co-chair of the Programming Committee] says he’ll die happy if he ever sees The Radiators on stage at Door Community Auditorium. I’d love to see NRBQ on our stage sometime. Alejandro Escovedo is one of those names that has been on the list since I got on the committee [in 2012], and it was always, ‘Let’s keep him on the top of the list’.”

Which paid off, since Escovedo headlines the July 8 show with local legend pat mAcdonald.

Nelson said sometimes committee members might have seen an act at a festival somewhere that they want to advocate for but feel the act or individual might not be well enough known, which is when Cari Lewis reminds them, “Our mission is to expand people’s ears.”

“I view us as support and a sounding board for Cari,” Nelon said of the committee. “Cari is a good executive director. I’m not sure how she works her magic because I’m always amazed during the months of February, March and April when all the sort of brainstorming we’ve been doing the previous six or seven months comes together and you have to do all the hard bookings.”

“I would say about a third of the process is a bit formulaic, getting the dollars and calendar to make sense,” Lewis said. “A third is about art and craft, knowing what’s going to sell, but also looking for emerging artists. And a third is a bit more like luck or magic.”

Lewis said there are several natural challenges the DCA faces in booking for the season.

“That means we’re looking within a specific range, acts that are between $15,000 and $35,000. That seems to be the sweet spot for us,” she said. “Another challenge is tour managers don’t like to see someone making a one-way trip. Being on a peninsula, that means they have to backtrack. A lot of agents don’t like to see that. Another challenge that has caused us to go a little bit more in the direction of brand-name artists – the number of free concerts in the county.”

In this season’s lineup, Lewis said the July 12 show with I’m With Her will be the sleeper of the year. I’m With Her features three acclaimed songwriters – Sara Watkins, Sarah Jarosz and Aoife O’Donovan – performing as a trio.

“I think people possibly hear the name and think it might have a political affiliation,” Lewis said. “They’ve been together as a group since 2014. Sarah Jarosz, a mandolin player, was here a couple seasons ago. It was one of the most beautiful concerts of the season. I really feel it is one where we got lucky and it happened for us this year.”