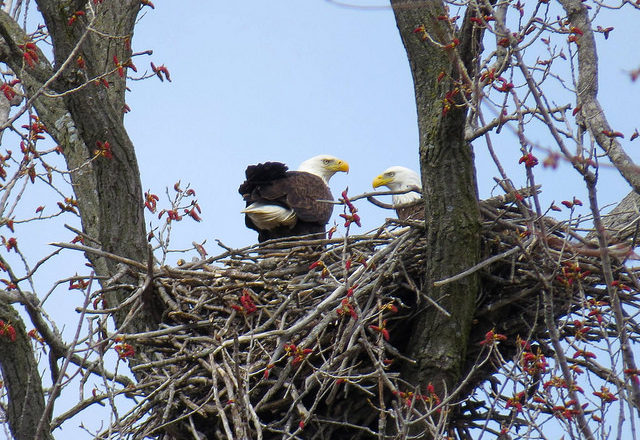 A record number of bald eagle nests were found statewide in 2018. Photo courtesy of the DNR.

Wisconsin’s bald eagle population continues to reach new heights as 2018 nest surveys revealed a record number of nests statewide, and Walworth County confirmed its first documented nest in at least a half-century, according to results released in the 2018 Wisconsin Bald Eagle Nest Survey.

“2018 was another great year for the bald eagles’ remarkable comeback in Wisconsin,” said Laura Jaskiewicz, the Department of Natural Resources research scientist who coordinates the statewide aerial survey effort. “The number of nests is still increasing throughout the state, and we now have them documented in 71 of 72 counties.”

The 2018 surveys found a total of 1,695 bald eagle nests occupied by breeding adults, an increase of 105 nests from 2017. That’s a 6.6 percent increase and more than 16 times as many nests found in the first detailed surveys in 1974, when bald eagles were listed as state and federally endangered species, and only 108 nests were documented.

As in past years, Vilas County with 172 nests and Oneida County with 154 nests had the highest totals. Bald eagles prefer to nest in tall trees along water, and these two counties have some of the highest concentrations of freshwater lakes in the world.

“It doesn’t seem like we’ve hit any ceiling yet,” Jaskiewicz said. “Eagles are still finding places to nest – some continuing in the same nests for many years, and some new ones popping up here and there.”

Confirming the Walworth County nest means that Milwaukee County remains the lone county in the state without a known active eagle nest. Sharon Fandel, a DNR district ecologist with the Natural Heritage Conservation program, said the heavily developed nature of Milwaukee County means there is relatively little bald eagle nesting habitat available and that it is less likely a nest will be documented there.

“That being said, it’s certainly not impossible. In areas like the Twin Cities metro area of Minnesota, bald eagles are doing quite well, and the Minnesota DNR has documented dozens of active nesting territories,” said Fandel.

People who have seen new, small nests can report them by searching the DNR website, dnr.wi.gov, for “bald eagle watching” and click on the link on the right-side navigation column for “Report a plant or nongame animal.”