Having worked with various groups in the field during the past 50 years, I continue to be amazed at the incredibly large number of butterflies on the wing during much of June. However, this summer has been an exception. My list as of today, June 21, is forlornly short. A few Monarchs, one Meadow Fritillary, a few Red Admirals and several Spring Azures complete the list.

Were it not for the usual lilacs in bloom now my list would be close to zero. Undoubtedly due to the cold weather, few flowering plants are available for the little “sun worshippers” as one could call these early butterflies. The large patches of lilacs at the Toft Point State Natural Area have in past years been excellent places to sit and wait for these flashy insects. It was a few years ago during the unusual early heat spell that I lucked onto the Pipevine Swallowtail at the Point, only one of about a half dozen seen for the entire state that late spring. 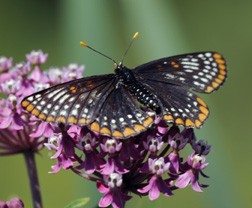 Butterflies appeared to be active in all directions that year. One scientific writer, describing that unusual phenomenon, indicated that late butterfly-filled springs may occur only three or four times every century. Our usual small patch of Stinging Nettles north of our garden harbored plenty of the larvae of Milbert’s Tortoise-shell Butterflies. Hopefully the following early spring would have plenty of these small colorful butterflies on the wing.

There is one species, the Baltimore Checkerspot, that I’m hoping to luck onto for good pictures this summer. How I remember the thrill of June 30 a few years ago and seeing my very first live Baltimore Checkerspot along County K north of the Brussels Hill in southern Door County. Our nature class of 10 students studying the geology of that part of the county had just gotten out of the cars with Charlotte and me.

I crossed the road next to the exposed bluff and caves to begin sizing up the various wild plants growing there including Spikenard and several unusual ferns. Charlotte was walking across the road about 30 feet to my left and called our attention to what appeared to be a dead butterfly on the road.

Much to my joy I recognized it immediately as a Baltimore Checkerspot, and it was simply flattened out and basking in the sun, very much alive. Here was a much-sought-after species, apparently uncommon to our area that I had been waiting to see for many years.

My professional entomologist friend, Dr. John Wilterding III, had prepared me for seeing my first Baltimore Checkerspot by saying, “Have your close-up camera ready because these butterflies are incredibly tame and trusting.”

Ever so gently I nudged a finger beneath the one and one-half inch creature, and, to my great pleasure, it inched its way onto my hand and remained there. Now I could stand up to show the prized performer to each of the students.

How patiently that little “ham” withstood the impromptu real-life lecture while being only inches away from the face of each of the students. Naturally not a single person in the entire group, including me, had a camera. 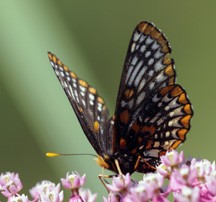 I recalled from an August field trip there several years ago of seeing a number of flowering Turtlehead plants, Chelone glabra, in the wet ditch along the sunny north side of that road. These are the host plants of this butterfly species, the leaves being eaten by the larvae.

Hopefully here is a relatively quiet country road where this wonderful natural garden will continue to thrive, all the while supporting a stable population of these strikingly beautiful Baltimore Checkerspots from year to year.

I’ve had the good fortune to become friends of a person who, through the years, carefully built and continues to maintain a pond surrounded by plants that are attractive to a number of different butterfly species along with many dragonflies and damselflies. One plant, the White Turtlehead, is the plant upon which the female Baltimore Checkerspots lay their eggs. Another plant growing there is the tall pink-flowered Swamp Milkweed. Even though the plant is sought after by the Monarchs for their egg-laying, it is also a heavy nectar producer and will nicely attract the Baltimores to them. It is on one of those stately plants that I photographed a feasting Baltimore Checkerspot.

The upper wings of this butterfly have a checkered appearance with all four wings being decorated with small bright orange-red spots. The lower wings have brilliant red and buff makings. Individuals have a one and one-half to two and one-half inch wingspan.

Sphagnum bogs and lush swampy meadows, along with secluded wet roadside ditches, are their preferred habitat, the very sites where one would expect to find Turtlehead wildflowers growing. The usual flight period of the Baltimores is from about mid-June into early July.

What is so incredibly amazing is that these striking butterflies remain intensely local, firmly attached to the environment of their host plants, the Turtleheads. Should the population of these tall, white-flowered plants remain constant from year to year, the Baltimore Checkerspots will also thrive there.

If I were the owner of Turtlehead wildflower habitat I would protect their existence with a passion, if for no reason than to ensure the continuing survival of one of Wisconsin’s most beautiful butterflies.

There are several Wisconsin State Natural Areas in our region which have good standing water along with native plants. Should there be Turtlehead wildflowers at some of the particular sites, do some careful observing and you stand a good chance of seeing the Baltimore Checkerspots too. Bear in mind that this is their flight time, so grab your knee boots, camera and insect repellent and be on your way.