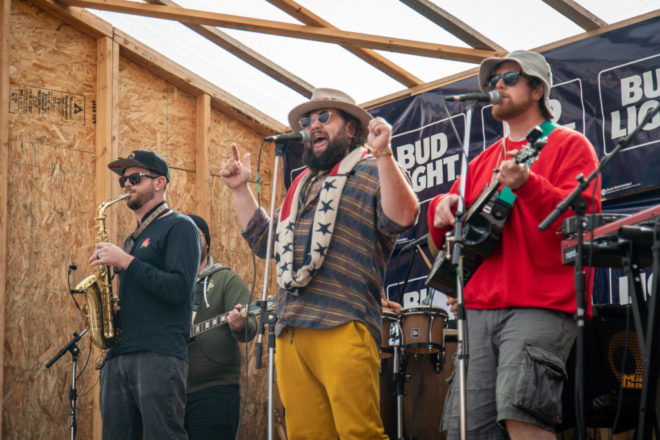 Would a band by any other name sound as good? I have no idea, but here’s how 13 regulars of the Door County music scene got their names.

In grade school, Brett O’Connor was nicknamed B-O-C. The “C” in his nickname was always dragged out, and once, he sneezed in the middle of saying it. After that, kids started calling him B-O-Sneezy – a name that stuck when he became the lead singer of the funk-inspired band.

This Green Bay–based blues-rock band got its name by modifying the surname of its guitarist, Randy Siscoe.

In college, acoustic singer-songwriter Hunter Hildebrandt majored in international studies with an emphasis in anthropology. When he saw one of his professors as a friend suggestion on Facebook, he changed his username to Hunter Gatherer as an inside joke, referring to ancient nomadic peoples who obtained their food by both hunting animals and gathering wild plants. But when people started thinking it was his real name, Hildebrandt decided to start using it as his stage name.

“I could have come up with a cooler pseudonym, but after so many years, I was in too deep,” he said.

This two-piece cover band is a spouse duo, Carmyn and Nick Hoen. Before they got married, Camryn used to call Nick to ask him whether there was an open tab at whichever bar he was visiting. Nick always said yes, and when they started making music together, this tradition became their name.

The name of this ’80s cover band is a reference to the iconic ’80s movie of the same name, which makes it a conversation starter and movie recommendation rolled into one.

The four original band members were all in the same English class at Sheboygan North High School. During a unit on Greek mythology, they learned about Dionysus, the god of winemaking, festivity and theater. They thought he would make a cool name for their new band, but they thought his Roman analog, Bacchus, sounded even better. The second part of the classic-rock band’s name comes from that same English class, and it’s a reference to the Lotus Eaters: the inhabitants of an island in The Odyssey.

7. Good for the Soul

The name of this acoustic duo is a nod to the psychological benefits of music. The two musicians have observed these benefits firsthand as they play music for people in hospital, memory-care, rehabilitation, assisted-living and hospice settings.

London Mules and Kentucky Mules are some of guitarist/vocalist Matt Gordon’s favorite cocktails. While discussing these drinks, a friend suggested that if there were a Chicago Mule, it would be made with Jeppson’s Malört, a notoriously disgusting liqueur native to Chicago. Though such a drink might be an unpleasant one, Gordon thought its name had a nice ring to it, and it later became the name of his two-piece cover band.

9. The Gravity of Youth

According to band manager Brant Spiewak, much excellent music has been composed by people younger than 22 – those who are feeling what one might call “the gravity of youth.” Spiewak said, “When young people reach a time when the world begins to sink in and [they] discover they have a voice, great music is written.”

Lead guitarist/vocalist Johnny Delorit started playing guitar at age 4. By the time he was 10, he needed his own space to “make lots of noise,” so his parents created such a space for him in their old, stone-walled basement. Delrorit named the area The Cove once it was finished. Months later, when he and his friend Avory Kahles, a drummer, started a band, their practice space became their name.

Inspiration for the country-rock band’s name came from two musicians: Dierks Bentley’s album Modern Day Drifter and Willie Nelson’s song “My Heroes Have Always Been Cowboys.” In that song, one lyric says, “I learned all the rules of a modern-day drifter / Don’t you hold on to nothin’ too long.”

Band manager and lead singer Pita Kotobalavu chose the band’s name to reflect the reggae-roots group’s goal: to bring people together to share music and love.

In 1993, members of this rock ’n’ roll band threw around many possible names and landed on Glass Hammer. The band split up around 2000 but came back together in 2010. At that time, its members learned via Facebook that another band had trademarked the Glass Hammer name in the meantime, so they decided to revise their spelling.

“It was a struggle to get places to recognize the new spelling,” lead singer/guitarist Brian Jilot said, “but over time, it has now become a very recognizable and now very original name we have come to love.”