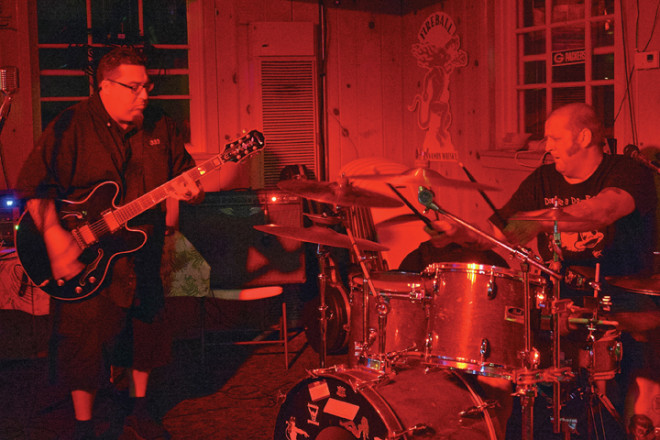 People who experience a Dirty Deuce show shake their heads at the primal energy unleashed by Rob Atwood on guitar and vocals and Jamey Clark on drums. How can so much sound come from just two guys?

It turns out that being a duo is a blessing and a curse. There are fewer egos to deal with, fewer things to get in the way of the intuitional, improvisational nature of much of what they do together. But they don’t seem to be viewed in the same way as a “band.”

“People are like, ‘We’re not going to hire you to play because you’re only two people.’ We get that all the time,” Clark says.

“Yeah, we’re not a band. We’re just two people. I don’t know…” Clark trails off before adding a final note, “I love the sound.”

The sound is really what it’s all about for both men. 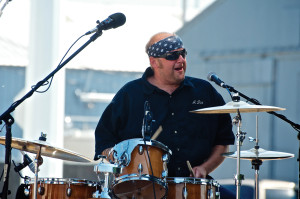 “Rock ‘n’ roll for me in my bitter jadedness seemed like it was on its way out the door,” Atwood said. “At that point [when he and Clark hooked up] we had had 15, 20 years of hip hop and top 40 radio and Disney kids being No. 1. The music was soulless, an electronic series of 1s and 0s. I wanted to play rock ‘n’ roll with nothing. I wanted it to be literally drums and guitar and singing. Sometimes you’d get a sound guy putting reverb on my voice. I’d literally have to stop and say, ‘No, man, I want it to be exactly as if I was playing in my living room. That’s how I want it to sound on stage.’ We’ve actually gotten away with it pretty well.”

Before he arrived in Door County, Atwood fronted The Probers, a Milwaukee-based band that had a good run from 1994 to 2003.

Besides being an in-demand jammer, Clark played drums in Smoked Chub (“which was really, really obnoxiously loud punk music,” he said) and Little Marsh Overflow, another band that had a good run.

But it was while Clark was working at the Bayside Tavern in Fish Creek that he first heard Atwood and The Probers.

“The first time I heard Rob singing and playing at the Bayside, I said to myself, I want to be a Prober. I want to be in this band. I want to play with this guy. They were awesome. Then I found out that, great, the front man and drummer are best buds from grade school, so I’m not breaking into that, but it just came around, Rob ended up here.”

Ended up here is right, Atwood will tell you. The Probers took a toll. By the end, he was broken.

“The Probers was the band for me that got pretty big. Seven dudes in the band plus two roadies. We went all over the place. You begin to not like each other. And if everybody is indulging in chemical substances, and not necessarily the same ones, that actually clashes. When that was all said and done, a friend of mine came and got me and said, ‘I’m taking you to Door County.’ I had only been here in the summertime a couple of times with the band to play. I came up in January. That was terrible. I don’t like winter. And there were no women. None. 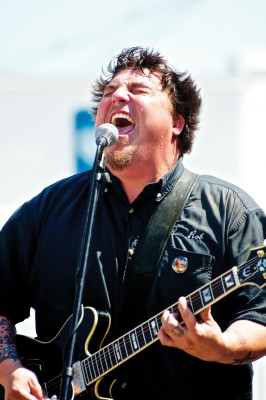 “But I was literally barely playing music and was very bitter. I had lost band members to overdoses. I had been scammed by a few labels. The whole story. Because I went about it in the wrong way. I wanted to be a rock star and was dealing with the wrong people.

“Jamey showed up one night while I was up here and said, ‘I’m going to play drums with you.’ I was down and out. I had an acoustic guitar. No PA. No amp. I was lucky to have the acoustic still. I was in bad shape.”

And so it began, a musical relationship built on trust, understanding and delicate musical intuition.

“We actually did it for fun. We didn’t say we were going to be a band,” Atwood said. “Jamey playing drums. Me playing an acoustic through a PA. We used to do Thursday nights at The Nautical for food and drinks. We made stuff up as we went along because we weren’t a band. It was 80 percent improvisational. Of course I would play some Prober songs, but it was all original from day one. I think it was the best thing for us to do. We never said, let’s play this way or let’s do this. It was always, do you like this 7/8 beat or do you like this chord progression? We never tried to play any covers. That’s how it took off.”

“If Billy (MacDonald) would never have booked The Probers at Bayside, I would never have heard this guy sing, and the world needs to hear Rob Atwood sing,” Clark said. “Seriously, man. A lot of the tunes are his writing, his voice, his guitar. All I’m really doing is playing some drums and filling in, and find words once in a while.”

You notice when they are playing that there is regular eye contact between the two.

“That’s the best thing about playing with Jamey,” Atwood said. “With other bands I had to rehearse. I had to explain what I wanted to do. The funny thing is, neither one of us has ever looked at each other and said, don’t do that, do this. It’s more, come up with these chords and then he’d do his own thing. We’ve always been able to play improvisationally.”

“A whole song, lyrics and all, all right off the top of our heads,” Atwood said. “I’ve played with lots of drummers, lots of bands. I’ve been doing this since I was 13 and I’m 43. But never has it worked as well. Hey Jamey, what do you think of this? I’ll play eight measures and he’s got it. That’s the best part for me.”

“A really hard lesson pounded into my head as drummer is be a good listener,” Clark said. “A lot of people don’t do that. You can hear it or feel it if someone is playing with everyone around them or in their own world. I’ve jammed with a lot of people, too, and this just feels right. This is really what I want to do. Everybody else that I have played music with, and some that I still do, this project is most important. I love it.”

Next Up for Dirty Deuce 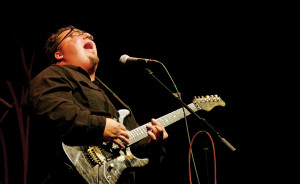 Triplett, who had toured with Joe Walsh, Pat Benatar, Robert Cray and the Goo Goo Dolls, to name a few, produced Dirty Deuce’s 2012 record Big Ol’ Sexy (on vinyl) and had big plans for the duo when he was interviewed for the fall 2013 issue of Door County Living. Unfortunately, Triplett died of a heart attack at the Holiday Music Motel in Sturgeon Bay on Aug. 11, 2013, before ever realizing his goal to bring Dirty Deuce to a much larger audience.

“He tried to get us to tour with Joe Walsh,” Dirty Deuce singer/guitarist Rob Atwood adds.

“Yeah, right before he passed we were working out a thing to play a couple shows in Portland, Oregon, where he used to live,” Clark said. “He did have one show booked. That kind of fell through when he passed.”

“I want to get this album done that Billy worked on,” Atwood said. “He did seven songs before he left. They’re almost done, and then put on maybe five more. Our new album’s going to be called 333. There’s Triplett, and there’s 33 and a third for vinyl.”

“Billy was really great. Great to meet him and just to hang out with him,” Clark said. “I told him he’s lived the life I always wanted to live.”

“He had the best stories, man!” Atwood said.

And, yet, after all the stories of life on the road with top-draw musicians, Triplett was focused on helping Dirty Deuce.

“He did!” both Atwood and Clark say, adding that he got them to take the music more seriously.

“All that came with Billy going, ‘Hey, I don’t think you know what you guys can do,’” Atwood said. “I told him The Probers went so wrong, I can’t do that anymore. I’m 43. I have a wife and three kids. I’ve got to at least bring home some Ramen noodles.

“Billy asked me, ‘So what do you really want out of your music career?’ I was really honest with him. ‘I don’t want to be a rock star. That was a dream I had for many years that I realized was a wrong dream. What I really want is to be a musician of a certain caliber where I can make $40,000 to $70,000 a year.’ Those were my exact words. He said, ‘Really, you have a price cap on it?’ I said, ‘Yes, because that’s what I need to take care of my family the way I want to.’ He said, ‘You know, that’s not a lot of money.’ I said, ‘I know, but it’s twice as much as I make now.’ He said, ‘Do you know how easy it would be to do that?’ That’s what got me. He kind of dumbfounded me when he said, you’re an idiot if you don’t think you can do that.”

That conversation got Atwood thinking of his situation.

“I want it to be a noble profession again, not, oh, you’re 43 with a wife and three kids and you’re still playing guitar? As if there’s something wrong with it. I want it to go back to, ‘So, you’re a musician.’ I’m not in a garage band, I’m actually a working musician.”

“Every once in a while we’ll go to a place where nobody knows us and maybe not many people show up, but the owners still give us the guarantee and maybe a little extra and say, ‘When can we have you back? You guys are awesome’,” Clark said.

“My favorite one is, ‘Why are you here?’” Atwood said. “I used to take offense at that. Not anymore. I understand now it’s a compliment.”