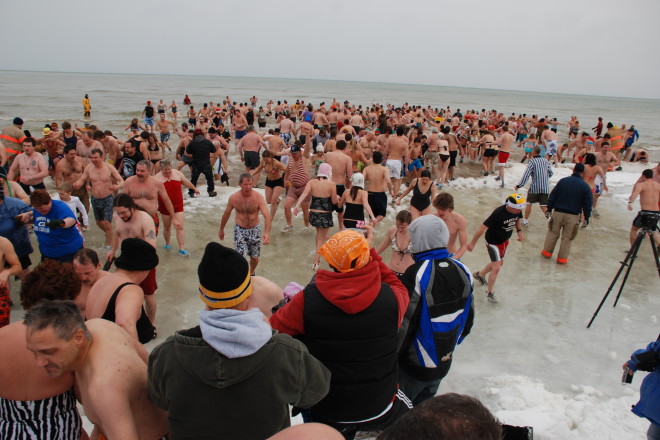 The seed for the Jacksonport Polar Bear Plunge was planted in 1984 when 11-year-old J.R. Jarosh challenged his father, Joe, to compete in the five-mile race during Sister Bay’s Fall Fest.

“Being an overconfident 11-year-old, I thought I could beat this 39-year-old geezer,” J.R. said. “He bet me, and the bet was whoever lost had to swim in October.”

J.R. lost the bet, so he and a friend plunged into Lake Michigan in October.

“It was cold, but we survived. I think that planted the seed for going in in other months,” J.R. said.

Living near the beach in Jacksonport, J.R.’s fertile young mind wondered how it would feel to jump into the lake every month of the year. The lake was there, beckoning, until, finally, on New Year’s Day 1986, J.R. took his first solo polar bear plunge while his family watched from the beach.

“It was a snowless year,” J.R.’s mother Sue recalled.

“There was a thin sheet of ice on top, as I remember. I ran out there and jumped in,” J.R. said. “I laugh now, thinking back, my mom wouldn’t let these two guys in (referring to his younger brother Jon and father Joe), but somehow I was cast to the waters and it was OK.”

“I thought he was nuts. Straight out,” Jon said. “I was kind of like, I don’t mind holding his towel. I’m happy being warm.”

But he, too, would eventually be bitten by the polar bear bug. 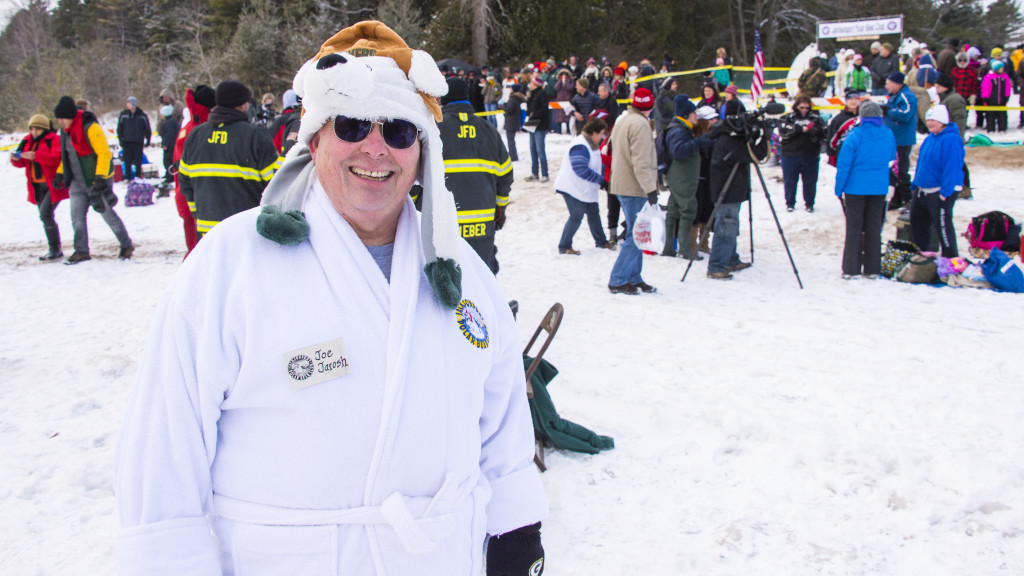 “Jon and I started going in the same year,” Joe added. “He talked us both into going in. We’ve been going in every year ever since. I said I retired after 21 years and the only reason I’d come out of retirement is if there’d be a three-generation thing.”

And then it just took off. People started joining J.R., to the point where the whole Jarosh family, including mother Sue, were involved.

“Each of us had different roles,” Joe said. “Jon took care of publicity. J.R. was pretty much the organizer. Sue took care of all the volunteers. I was the emcee up on the ladder.”

Dressed in a robe and addressing the crowd from a ladder, Joe Jarosh has become an iconic figure in the annual icy plunge, as has J.R., who for the past 10 years has led the plunge in a tuxedo.

The formal attire got its start at the 10th anniversary of the plunge.

“At the 10-year anniversary I wore a bow tie to give a salute to the first decade, and a cummerbund over my swimming suit,” J.R. said, and that, he adds, was in a tribute to a Saturday Night Live Chippendale skit performed by Chris Farley and Patrick Swayze.

“I thought it was funny with Chris Farley just embracing this bow tie and cummerbund, so I thought, let’s try it. And for the 15th year, I wore the bow tire and cummerbund again. For the 20th, you have to upgrade, so went to the full tux. Jon had just gotten married. I bought the shoes, they were the patent leather shoes. I had the tux already and the shoes. It just seemed right.” 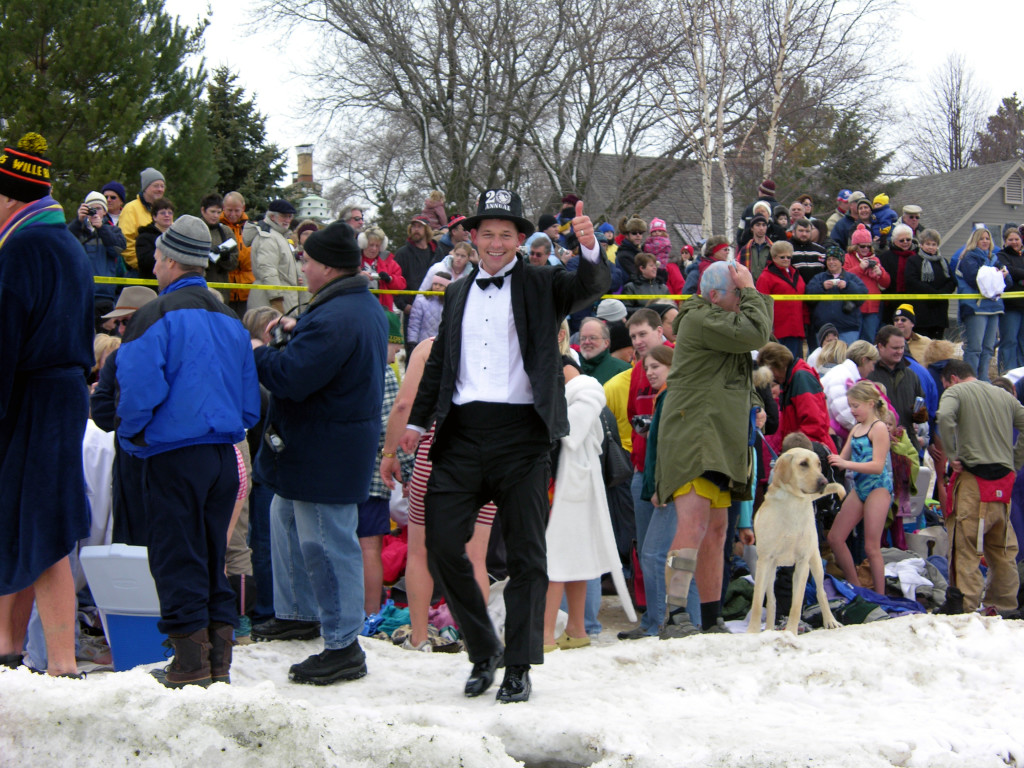 Jacksonport Polar Bear Club founder J.R. Jarosh, dressed in the tuxedo, walks the shoreline prior to the start of the 20th annual swim on January 1, 2006. Submitted.

He’s maintained the tuxedo look ever since.

“I wasn’t as cold as I thought I would be, so that just kind of stuck,” he said. “The good folks at Tip-Top Dry Cleaning always laugh because they know they are going to be getting a sandy tux the first week of January. They stitch it up, whatever battle wounds it takes. I remember during the filming of Feed the Fish, we were in between takes, at the Wagon Wheel for that final scene, and usually when we do it on New Year’s Day, you jump in, go home and within 20 minutes you’re out of your tux. But between takes, I had three or four hours. I was trying to stand by the fire and I was too close and the back of the tux started to melt, so she had a little more of a repair job there. It’s like a football player’s helmet, you can see it all beaten up. This will be its 10th year. It’s also a good incentive to stay in shape, so I can fit into it.”

In honor of the 30th anniversary, J.R. is asking that others find their own formal wear to celebrate the tradition.

“So pull out an old tux or hit the thrift shops, visit Bargains Unlimited,” J.R. said. “Get an old dress, an old tuxedo, an old suit. The costuming as we’ve gotten bigger makes it better. I remember Pete D’Amico’s Grinch costume. There have been some good ones.”

The family works with the Jacksonport Fire Department to ensure the plunge is safe for everyone. There has not been an accident in 29 years. The fire department is also the beneficiary of any proceeds from the sale of plunge merchandise. On the day of the plunge, they also accept donations and food for the Feed My People food pantry in Sturgeon Bay.

The family believes it’s the close cooperation with the fire department in planning and holding the event that has made it the family friendly event it has become.

“It is such a relatively safe adrenaline rush,” J.R. said. “We’ve had more than 500 swimmers for the last decade. It’s exciting.” 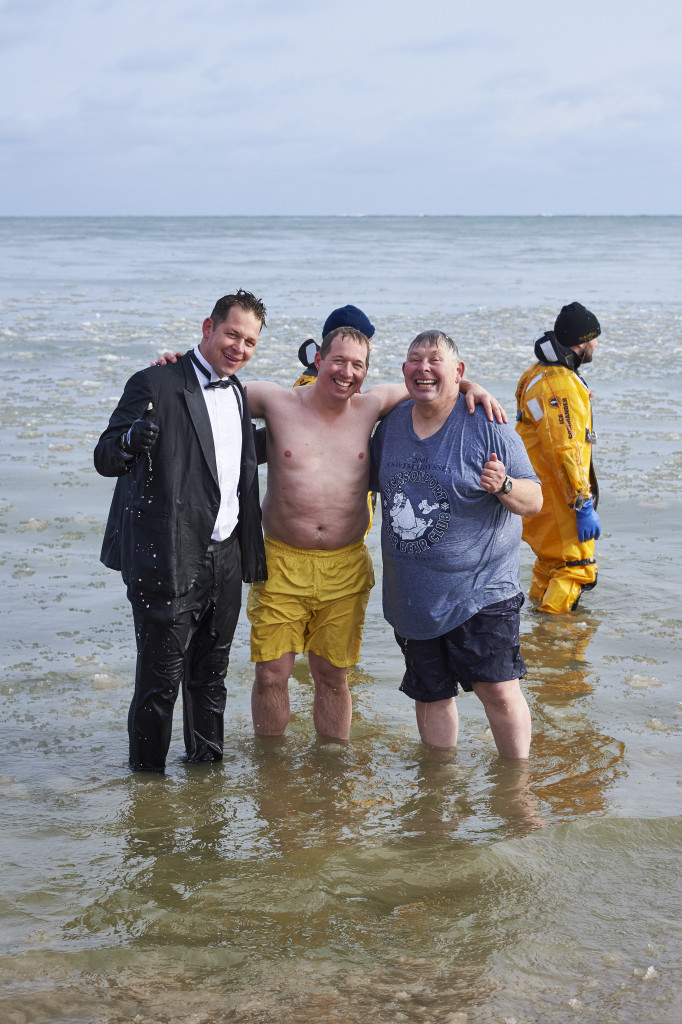 J.R., Jon and Joe Jarosh after taking a dip in the 2015 Polar Bear Plunge. Photo by Len Villano.

The family believes the plunge has become a multi-generational tradition and rite of passage.

“You’re drawn to see what your limits are,” J.R. said. “You look around the beach that morning, you see people dealing with themselves. Like you see at the start of a marathon, somebody who hasn’t done it before, it’s kind of a soul-searching moment, you see that on their faces when they come out, holy cow, I did it. It’s just a fun thing.”

“I know. I do that too,” J.R. said. “I feel proud and just so happy that people can feel that. It’s such a feeling of accomplishment. I was a physical therapist for 10 years, and I’d see that after somebody would walk the first time after surgery or an accident. That feeling like, I did it. It’s a real neat thing to experience. Maybe you’ve gone through a tough patch in your life, maybe family issue, a marriage issue. People come up to me and say, thank you for doing this, I needed a reset and this polar bear jump got me to do something really crazy and after that I can do anything. It’s really true. The more serious, sweeter side of what the swim offers people is something crazy to start out and to wipe your slate clean. There’s a lot of angles why the polar bear swim means a lot to people, and I like all of them.”

This Could Be a Record Year

The Jaroshes are expecting a record crowd at the 30th annual Jacksonport Polar Bear Plunge for a lot of reasons.

“The calendar always plays a role in it and also the football schedule. I think we’re poised at this point for a record year,” said plunge founder J.R. Jarosh. “New Year’s is on a Friday. People have the weekend to be in Door County, slash recover. Packers aren’t playing. Badgers aren’t playing.”

“That makes a big difference,” said J.R.’s mother, Sue Jarosh, who organizes the volunteers for the annual plunge.

“I’m always guardedly optimistic about just about everything, but specifically for the swim, I think it’s going to be a good year,” J.R. said.

The mild weather might also contribute to a record year. Without a freeze on the lake, people might be able to make a mad dash into the lake instead of following lanes into a hole in the ice.

There also might be a couple of personal firsts for the Jarosh family this year.

“We’ve had a 75 percent participation rate from the family,” patriarch Joe Jarosh said, indicating that his wife, Sue, has never taken the plunge.

J.R. said his twin nine-year-old daughters, Abby and Anna, have been talking about going in for the 30th plunge.

“I said, that’s great, but you can’t do it the first time New Year’s Day. We have to do a practice run in December, with nobody around, just us,” J.R. said. “So the other night they brought it up after school. It was a nice night, kind of wavy, kind of exciting. So for better or for worse, my wife wasn’t home, so we changed into our suits and headed down to the beach, just about dark. Anna was raring to go, and Abby was agreeable, but not quite as excited. Anna dove under. I dove under. Abby kind of waited then she dove under. We all came out, dried off, and it wasn’t too bad, much like New Year’s Day. Walking back through the park, I said, what do you think? Do you think you’re going to do it? Anna looked and said, ‘I’m 59 percent sure I’m going in.’”

“I said if the girls did it, I’d pull a Brett Favre and come out of retirement so we’d have a three-generation swim,” Joe said. “As the patriarch, it has brought an already close family even closer together because we share a bond with this swim.”