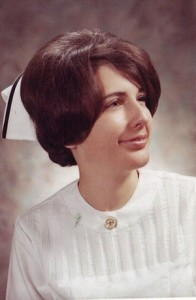 Barb Chisholm in her 1968 graduation photo from the Mercy Hospital School of Nursing in Oshkosh, with her “dignity,” the nurses cap she wore throughout her career in the Emergency Room at Ministry Door County Medical Center. Submitted photo.

“The cap of a nurse is often spoken of as her dignity, and the wearing of that bit of linen does add poise and dignity and commands added respect for even a very young nurse,” American Journal of Nursing, 1935.

When Barb Chisholm started her career as a young nurse at Door County Hospital, now Ministry Door County Medical Center, in 1969, all nurses wore a cap – also known as a “dignity” – and the Emergency Room looked a whole lot different. “Patients were brought in by hearses and in the backs of police cars,” Chisholm explains. “And the doctors on call would not come in until we had admitted and assessed the patients.”

White caps were standard nursing attire throughout the 1970s, and each cap was different depending on where a nurse graduated from school. Back then, the Door County Hospital had just 30 beds and no Intensive Care Unit. If a patient needed extra care, a nurse would be hired by the family for “private duty” – one-on-one care for that patient.

“Families would hire a nurse from the hospital on the spot,” says Chisholm. “We were paid $2.75 an hour.”

The hospital also had a waiting list, and when a bed opened up, hospital staff called the next person on the list to inform them of an opening.

“It was common practice for people to admit themselves,” Chisholm recalls. “After hours, people would ring the doorbell and say ‘I’m not feeling good. I’d like to be admitted.’” She also remembers that families would sometimes leave their elderly relatives at the hospital for a week if they needed to leave town.

“Back in the beginning days of the ER, when we heard the sirens, we said a silent prayer that we would do the right thing,” she says. She describes the physical setting of the early Emergency Room as “two gurneys and no nurse’s station. The other nurse and I would take turns sitting on the stool behind the door.”

Since then, Chisholm has seen Ministry grow from a small town hospital, to a large regional medical center with more than 175 physicians on staff. She has also seen the ER turn into a state-of-the-art care center. Her 44-year career was spent mostly as Senior Nurse in the ER.

Not only does Chisholm remember the early days of the hospital, but her retirement this past summer also marked the end of an era. She was the last nurse at Ministry Door County Medical Center to wear the iconic white nurse’s hat.

“When I was growing up, my mother would say to me, ‘You can always tell a nurse by her hat,’” says Chisholm, who proudly wore her hat to work every day of her career, despite the fact that most nurses dress more casually now.

“I remember the day I got my hat,” she reminisces, “I graduated from Mercy Hospital School of Nursing in Oshkosh, run by Sisters of the Sorrowful Mother, which is ironically the same order which is now affiliated with Ministry. That was an awesome day.”

But it can also cause others to judge a book by its cover, and Chisholm tells of how young doctors would sometimes form opinions of her based on her traditional attire.

“The look on their faces was priceless,” laughs Chisholm, “because I think they might have been afraid that I was an old crab.”

The veteran nurse liked proving those young doctors wrong, as she worked side by side with generations of medical professionals, some of them younger than her own children.

Despite all of the changes in health care, the basics have remained constant.

“I’ve always loved working in the ER because of the fast pace, and the fact that we have to make split-second decisions to give patients the best care.” She also enjoyed the camaraderie between the doctors and the nurses. “We not only respected each other, but we become good friends in the process.”

In her retirement, Chisholm plans to devote more time to travelling and to her interest in local history, which has led her to researching and presenting on the Peshtigo Fire.

“I’m real proud of my Belgian heritage,” she says. Chisholm’s great grandmother and grandfather, who lived in Brussels on the farm where she grew up, survived the fire by climbing into a well and passing their infant son back and forth between them. “The Peshtigo Fire is a fascinating subject,” she says, “and many people in this area don’t realize the impact it had on Door County.”

Chisholm presents to civic and school groups on the topic, and recently performed a historical reenactment of her great-grandparents’ story to the Wisconsin Women’s’ State Convention.

Despite Chisholm’s busy schedule, she still finds time to work at Ministry on a casual call basis since her retirement. As for her hat, she wouldn’t think of nursing without it.

“If people in the community see me without my hat, they ask where it is,” she says. “But when I work a 12-hour shift, I usually take it off at about hour 10.”

Chisholm doesn’t see the trend of nurse’s hats returning, but at her retirement party, her colleagues made paper hats for all 70 guests.

“They all wore those hats for me,” she says. “Nursing is a wonderful profession, and it was a wonderful send-off.”