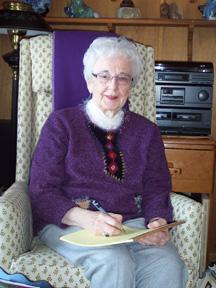 Because Door County seems to have more poets per capita than any other area in the state, the creation of a local poet laureate position seems especially appropriate. The late Frances May was honored posthumously as the county’s first laureate, and now Barbara Larsen has been recognized by the Door County Board as the next in line.

Larsen, who lives on Beach Road near Sister Bay with her husband George, began serving as the community’s literary ambassador on April 1. Her duties include writing poems relating to the community and special occasions, and enriching the lives of people around her by becoming involved with poetry workshops for schools, senior citizen programs, and other local organizations.

Unlike past English poet laureates she will receive no annual gift of wine, nor any financial compensation. Hers will be a labor of love.

“I believe in the power and truth of poetry,” Larsen said, “and its ability to connect with the hearts and minds of readers.”

“I am very honored to have been chosen among my peers,” she continued. “I have always tried to work hard in the field of poetry and hope I can do a good job as the laureate. It’s an exciting prospect!”

In some respects Larsen has been functioning as an informal poet laureate for years. She has published six volumes of her verse (two with illustrations by Gretchen Maring); wrote Trilogy, poetry that was set to music and performed by the Peninsula Chamber Singers; and has offered poetry writing workshops at The Clearing, Bjorklunden, Scandia Village, and Gibraltar Schools. She is active in two writing groups that she helped to found, the Wallace Group and Unabridged Poets.

Her work has been published in a number of journals, including Free Verse (now Verse Wisconsin), Rag Mag, the Wisconsin Poets’ Calendar, and the Wisconsin People and Ideas Magazine. She has won awards in the Peninsula Pulse Hal Grutzmacher poetry writing contest, and in 1995 received the Jade Ring for poetry in a competition sponsored by the Wisconsin Regional Writers Association.

Much of Larsen’s work is inspired by the beauty in nature that she sees from her home on a bluff overlooking the waters of Green Bay, but she also writes about family memories and humorous incidents. She is influenced by her reading, and as time passes, is becoming more philosophical in her work.

One such piece is her poem “Sunset from the Deck” from her first book of poetry Beach Road Year, a lyric that people have chosen to read at memorial services.

Memories are recounted in Pine Ridge, 1937, a collection of poems in which she characterizes people she knew during her youth, setting them in an imaginary village.

Her most recent book of poems is Finding Tongues in Trees.

Much of Larson’s poetry is composed from her favorite chair. “I find it a perfect place to do creative things,” she said. “Every morning I sit and look at the water.” In pleasant weather, she follows a path down the bluff to her gazebo where she writes.

Sometimes ideas come to her when she’s walking. She’ll make a note to keep it in mind, and then in her chair she’ll write the first draft in longhand. Later she’ll word process the poem and begin the revisions. “But sometimes,” she said, “a poem comes to me fully fleshed out, as if a muse is looking over my shoulder!”

Larsen has written all of her life, and for many years worked as an elementary school librarian in Sheboygan where her husband was a high school choral music director. They have two sons, Jeff and Steve, and two grandchildren.

The couple purchased the land for their Door County home in 1965, built their residence in 1979, and moved to it full-time in 1986.

Door County appeals to Larsen not only because of its scenic beauty, but because of the writers who live here. “Door County has a reputation for poetry in the state,” she noted. She pointed to the Dickinson Poetry Series readings sponsored by the Unitarian Universalist Fellowship as an example of the culture of poetry in the area. The program, which is beginning its third year, culminates each series with a chapbook publication.

“The world would be a more civilized place,” said Door County’s new poet laureate, “if more people were into poetry.”