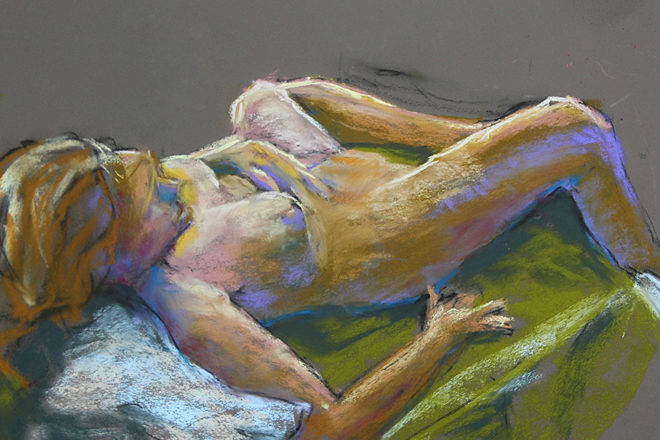 A pastel drawing of Gretchen Geurts, created during the Life Drawing Night at Base Camp in Sister Bay. Image by Kay McKinley.

When Gretchen Geurts gets a call to attend a life drawing class, she doesn’t bring pens, charcoal or a sketchbook with her. What she brings is internal: confidence.

It is undoubtedly the most important tool she has because by the time class begins, it is often the only thing she is wearing.

Geurts is a life drawing model. For the past 24 years, the bare curves and details of her body have been seen and recreated through various media by countless artists throughout the world, from Peninsula School of Art to Holland.

Today, she models for the Artists Guild in Sturgeon Bay and for the weekly Life Drawing Night at Base Camp in Sister Bay.

I caught up with Geurts recently to talk about getting into modeling, its challenges and rewards, and what it’s like to bare it all.

Alyssa Skiba (AS): What appealed to you about being a figure model?

Gretchen Geurts (GG): I’ve always been really fascinated with the human body. Every body has such a different format. There’s no body that’s exactly alike. There are always subtle differences in shape, in skin tone, in everything and so I always really appreciated when I had been figure drawing in school, I always appreciated the models in all their different shapes. I could really see myself doing that and doing that effectively just because the type of person I am.

AS: What makes an effective model?

GG: For me, it is being really improvisational and in the moment and being in tune with the group that you have, the shape of the group…if I’m in the center and I have a group around me, being an effective model in this state would be that I would be very mindful of how I would move my body, like in a clock so everybody in that group would get the perspective. My perspective would change with each pose. Also, I think it’s really important to be really animated, to be very energetic…it’s almost like a moving meditation so also to be really relaxed and still and steady in your breath and being able to be really smart in knowing how long you need to hold the pose. 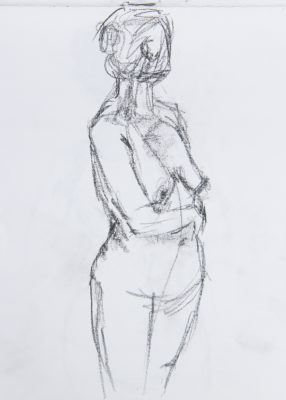 A sketch of Gretchen Geurts, created during the Life Drawing Night at Base Camp in Sister Bay. Image by Kay McKinley.

AS: Were you nervous the first time you modeled?

GG: Because I completely understand how much of a professional and respected position it is to be a figure model, it didn’t bother me at all and now I move with really stern confidence. I have no reservations or nervous feelings whatsoever.

AS: Walk me through a modeling session.

GG: I just modeled last night at Artists Guild in Sturgeon Bay so they do five five-minute poses and those I usually do standing. They are very animated because I can hold a lot of things for five minutes. Then they go into two 15-minute poses, which I usually do seated. It’s usually a two-hour thing and you get a break for 10 minutes which is fun because you can walk around and see some of the artists’ work, which is really cool. Then usually the last portion of class is longer held poses. In last night’s class, we did one 45-minute pose.

AS: Why are figure models so important to the art world?

GG: It’s hard to find people who have that kind of confidence and that don’t look at being a model as being somebody that’s like a stripper. It’s such a different thing. It’s more of really exploring the anatomy as an artist rather than being viewed as a person who is more of an exhibitionist. I think that more close-minded people in the community might have more of a narrow view – why would that person need to be naked? But then if we look back through history, some of the most famous pieces are of the human body. The anatomy of the body and to put clothing in places, fabric and everything can be really beautiful on the body, but the actual essence of the body is what artists want to capture. They want to capture the shape of a human.

AS: Have you ever become a piece of art?

GG: Depending upon if the artist wants to complete the work and put it in a gallery, that’s their prerogative. Who knows if people will know it’s me or not? Honestly I really don’t mind if they do know it’s me because I’ll be on the beach in a bikini in the summer…if people really want to zero in on a part of your body and make that a thing, some people are a little bit more weird about that kind of thing but I’m not. I don’t care. To be exposed like that doesn’t bother me at all…You need to detach. You’re basically becoming an object of art and you have to be okay with that and okay with whatever happens with it.

AS: What is the biggest challenge of modeling?

GG: I think the biggest is if you’re a little bit overzealous and you think that you can hold a pose longer than you actually do. You can get a little cramped in your body in a pose and in that case then you just have to rebalance a little bit. There are ways to subtly do that so you don’t have to wreck the artists’ concentration.

AS: What is the biggest reward?

GG: Being widely respected by the artist community is really cool. And admired for being confident, for being a person that isn’t afraid to expose themselves in public for this cause. Of course, a great thing is, what if an artist would be able to create this amazing, successful work of art and I was the reason? That I inspired them. Something in my energy inspired them to make this incredible thing.

The Value of Life Drawing

Alyssa Skiba (AS): What is the purpose of life drawing?

Kay McKinley (KM): Every artist is different. Some artists use this as a tool for larger works, for what would traditionally be called finished work but there are others, like myself, who enjoy gesture and consider these paintings to be finished.

AS: How does this help your artistic skills? 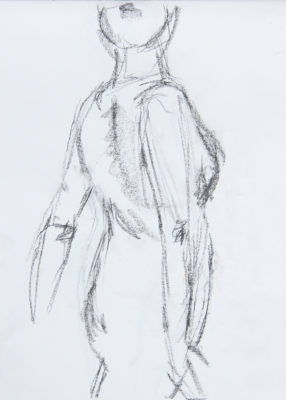 A drawing of Gretchen Geurts, created during the Life Drawing Night at Base Camp in Sister Bay. Image by Kay McKinley.

KM: I took a number of life drawing workshops and after taking them, when I am doing pastel work with other subject matter, I notice proportion more and placement and that kind of thing. The time you take drawing that way really helps with perspective.

AS: What’s the difference between a decent model and a really good one?

KM: To have a really good life drawing, it’s the same as any other expressive discipline: if the model is just sitting there instead of paying attention to a pose or is kind of lifeless, that’s not going to work well. A really good model will have ideas in terms of poses and be able to get into poses more quickly and more effectively.