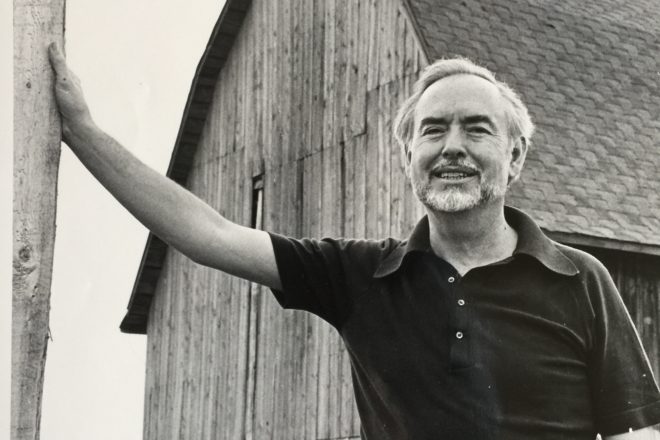 James Dutton was at a loss. It was 1978 and the Birch Creek Farm Academy for the Performing Arts that he founded just a couple years earlier was short on cash, as young arts organizations tend to be, and he and his wife Fran didn’t know how they were going to cover costs for next summer’s programming.

“Jim liked to stay in bed and think,” Fran recalled recently in an interview at the Lake Shore Drive apartment where she has lived for 50 years. A Chick Peterson painting of James hangs behind her, his old marimba is pushed against the wall below the large picture window, his music stand behind it.

“I’d get up and go to work, he would dream,” she said. “So I get to working one day, and I’m thinking about the predicament we’re in, and I ask, ‘Jim, what are we doing this for?’”

James was a teacher at Chicago’s American Conservatory of Music, was 54, an age when many people move beyond their dreams and settle into the stage of conserving for retirement. Fran had her own career as a pharmacist. They didn’t need Birch Creek to make a living. Fran went downstairs to get the mail at their Lake Point Tower apartment on Chicago’s Lake Shore Drive.

Such were the early days of a summer music camp in a barn a couple miles outside Egg Harbor. A random check here, a fundraiser in a living room there, and the passing of a hat were often what kept the doors open. 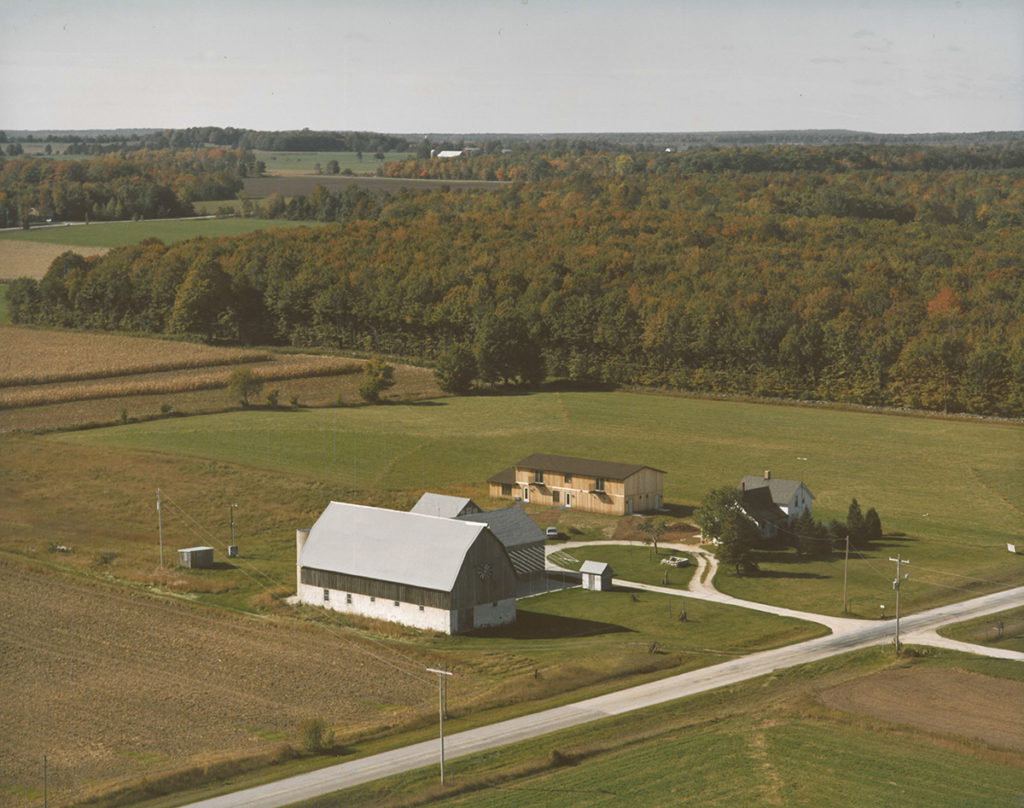 The Birch Creek campus in 1984, shortly after a dorm for students was constructed.

A Barn and A Vision

In 1975 Fran and Jim took a trip to Door County, searching for some land to buy where they could park their motorhome. They looked all over and didn’t find anything they liked until their realtor told them about an A-frame on 80 acres on County Rd E between Egg Harbor and Peninsula Center. They loved it, and soon James set about creating a summer camp for young musicians like the ones in Iowa that he had enjoyed as a child.

“He had students who played at the Peninsula Music Festival, so he was familiar with Door County,” Fran said. “He always had a goal to create a music camp. He loved teaching.”

The camp launched with just a percussion and combo program in 1976, with students practicing in a shed.

He planned to build a building on the property for the camp, but at the end of his long gravel driveway, directly across the road, the old Tishler farmhouse and dairy barn stole his attention. When a neighbor suggested he try to buy it, he quickly fell in love with the natural acoustics of the barn, and was soon haggling with the owner about buying it.

Interest rates were around 12 percent at the time, and friends told him he was nuts. When he told them he was going to spruce up the barn for concerts, they told him he was throwing good money after bad. James did not heed the warnings.

“Jim was a visionary,” said Fran. “He could see things other people couldn’t.” 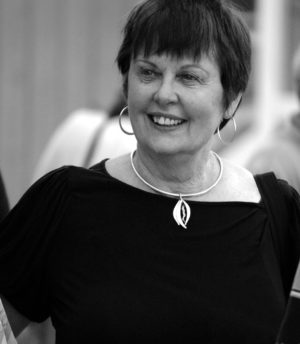 Fran Dutton, who handled the business and marketing for Birch Creek while her husband recruited instructors and students.

Before he even closed on the property a persistent young man named Tom Allyn began pestering him about renting the farmhouse. It was fortuitous, as Allyn was a carpenter who Jim put to work turning a barn into a performance venue. He was joined by another young carpenter, Tom Birmingham, and they set to uncovering the beautiful stonework that became the backdrop to the stage and converting milking parlors into practice rooms.

The two carpenters would go on to form Great Northern Construction, building some of Door County’s finest homes over the next 40 years.

James struck up a friendship with Sevastopol Schools Principal Carl Scholz to borrow chairs, computers and music stands in the summer. They spread the word about the venue by loading up a Suburban with students and instruments and playing free community concerts in parks, an early version of the concerts that are staples of the peninsula today.

He called on his musician friends, former students, and professionals he played with in Chicago, convincing them to come up to a rustic old barn in the middle of nowhere.

The first barn concert was held in 1977, when it was much more rustic, and smaller, then it is today. Longtime Door County Advocate Editor Chan Harris was a skeptical early attendee, but soon sang the camp’s praises, though he suggested they shorten the name, which they did, to the Birch Creek Music Performance Center.

Fran managed the books, schedules, ticket sales, and marketing while James recruited teachers and students. It was a full-time, year-round job. They built a dorm in 1984, and in 1988 turned over management of the center to the Birch Creek Fellows. James died in 1999, but not before he had made an indelible mark on his second home.

In hindsight people often tell you they never had a doubt they would succeed. Not Fran. When asked if she thought Birch Creek would last, she lifts her eyebrows and looks up at me over her reading glasses, “Well, Jim did.” 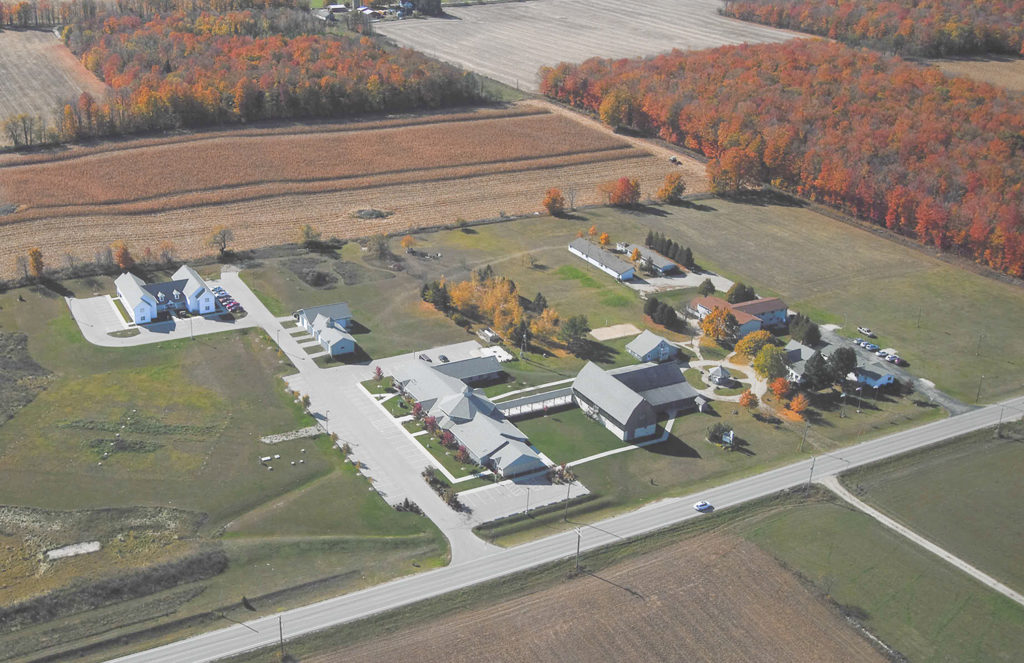 Birch Creek’s campus has expanded dramatically since its founding in 1975.