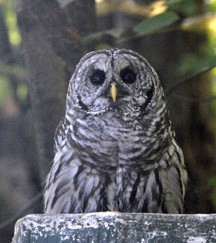 The bathing Barred Owl stared at Roy and his camera.

Over the years I’ve strongly recommended in some of my stories the importance of providing water for birds and other wildlife during the entire year. The three birdbaths on the ground plus a pedestal bath, all grouped quite closely together in our front yard, have provided Charlotte and me with much enjoyable watching and also the chance to keep up with which species were coming to drink, bathe and eat our handouts.

My alarm went off as usual at 6:30 am on Saturday, Sept. 29, and within a few minutes I had gone for a look out the living room window facing our front yard, the bird feeders and baths. One quick glance and I hollered for Charlotte to “Hurry, come see what’s perched in the middle of our pedestal bath.” There, alternately sipping and bathing, sat a Barred Owl – a “first” in all the 40 years we’ve been observing birds together! 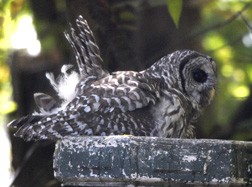 Slowly the Barred Owl lowered itself into the water to soak its bottom side.

In a flash I was down to my camera in the sun room, with the ISO set at around 2,000 to compensate for the dark conditions, firing one shot off after another. Unfortunately all those pictures turned out to be very dark and unusable. Occasionally, the owl would stop what it was doing in the water, sit rigidly upright and stare at me eye to eye. What interested me was that my presence didn’t appear to phase the bird one bit. Finally, after around five minutes of awesome watching and fun on our part, the rare visitor flew off in what appeared to be a very slow, heavy flight.

Within a few minutes the owl was back to the front yard where it momentarily sat on a big branch of the Sugar Maple right in front of the living room window, stared at us and flew off. Soon it returned, landed on the deck railing right in front of the door off the dining room and then flew down to the post behind and above our marvel meal feeder. Again I tried for photos, but the conditions still were much too dark.

We had no sooner started our lunch at 12:30 pm when the owl returned to the pedestal bath and took a vigorous, five-minute bath splashing water in all directions. Fortunately with excellent light conditions I was able to snap off 30 pictures, all the while varying my camera’s shutter speed and ISO setting. One of my favorite shots shows how it would lift its eight-to-nine-inch tail nearly straight into the air and flap its wings to really get lower into the water. What a lot of fluffed-out, wet, messy feathers that roughly one-and-a-half-pound bird appeared to have. 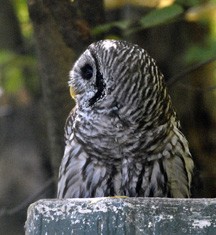 A side view of the Barred Owl shows the bright feathers around its face.

Door County has, to the best of my knowledge, four species of owls that nest here: the Great-horned, Barred, Screech, and Eastern Saw-whet. On rare occasions Long-eared Owls have also nested here. The Great-horned is by far the most common breeding owl in North America, nesting in virtually every county. Yes, the Great-horned is a common nester throughout our county but is not as abundant as the Barred. However, the Barred Owl is no match for the Great-horned and keeps its distance from the “Tiger of the Air,” which is about three times heavier and, on occasion, has been known to kill and eat the smaller owls including the Barred, Screech and Saw-whet. Recent news from our friend Tom Erdman, the bird expert at the University of Wisconsin – Green Bay, is that the population of both Barred and Great-horned Owls has been on the steady increase in this region in recent years.

The Barred Owl is the most commonly seen and heard owl here simply because it is often active during daylight hours and also is the most vocal of virtually all owls in North America. It mainly inhabits dark woods and swampy areas that not only are wet underfoot but also are treed over. Here food finding is best and, interestingly, the feet of Barred Owls are quite small and perfectly suited for capturing its favorite prey, mice and other small rodents.

In past winters on days when the surface of the snow became glazed and iced over, the difficulty Barred Owls had in finding rodents forced them to adjacent buildings. There the owls would have much better luck with the rodents that frequently form runways around the foundations of houses, garages etc.

I’m guessing that the Barred Owl that recently bathed at our home was forced elsewhere, away from the Hibbards Creek area east of our place because with the very dry conditions food finding, as well as drinking and bathing, have become extremely challenging for these raptors. Barred Owls are well known for their habit of drinking water frequently and bathing often.

Many people, upon hearing a Barred Owl, immediately refer to it as a “hoot owl,” perhaps its most common nickname. Others might call it a swamp owl, wood owl, eight-hooter, striped owl, or if living in Canada, the “hooting cat of the North.” Undoubtedly the owl’s questioning and delightful eight-note call is its most famous, sounding like “Who cooks for you, who cooks for YOUall?” 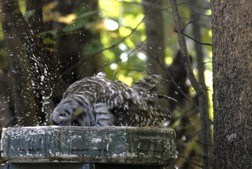 Here the Barred Owl is thoroughly washing its head, spinning it over 180 degrees.

Bear in mind that this owl’s vocalizations are much more than only hoots. They also include what could be described as coughs, buzzes, screeches, grunts, snores and growls. What a vocabulary. Wouldn’t it be great fun knowing what the bird is actually saying in owl language? Obviously these vocalizations are quite infectious for we have heard long, on-going sequences that hardly resembled owl talk.

On one occasion, when we were living at The Ridges Sanctuary, we were listening to and tape recording the peenting of a Woodcock in the meadow east of the Rangelight residence where the nature center now stands. A very talkative pair of Barred Owls soon entered that memorable concert at dusk. Suddenly one of the owls let out with a loud shriek leading Charlotte to say, “It sounded like one of the owls was goosed!”

To date I have heard only the songs of the Screech, Saw-whet, Barn (in Florida), Barred and Great-horned Owls. I like to dream the impossible and long for the day when I might hear the song of the Snowy Owl of the far North. It is said that the song of this magnificent white owl carries up to seven miles over the flat, treeless tundra. Like the old-fashioned mellow foghorn I learned to love during my boyhood in Kewaunee, these owl songs are also their sound beacons of the night.