While “away” games are standard procedure for all student athletes, away games for island students always begin with a boat ride – anything but standard for the majority of student athletes across the United States.

Forty-five minutes to an hour – that’s the amount of time it takes for the Washington Island Bucks Basketball teams, both boys and girls, to depart the ferry at Newport, and start traveling to their next destination. 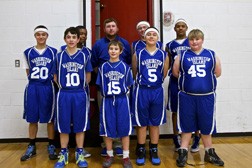 In winter there are only two boats to rely on. For games that don’t require an overnight stay, the team comes down on the 8 am boat, and goes back to the island on the 2:30 pm boat…this is a short day compared to most of their travels. When most schools and athletic departments schedule games for weekdays, Washington Island basketball players have most of their games on the weekend.

“I’m organized and have to schedule when they’ll be on and off the boat. This season boys have seven nights away from December through February. You try to keep that at a minimum, but when you’re traveling from so far away you have to,” said Nikolai.

This is Nikolai’s fourth year coaching, after moving up to the island in 2008 as a captain with the ferry line, a fitting role for the coach who has to be very familiar with the ferry timetable.

“Transportation is kind of tricky right now. Our school van is not reliable and the school board has been in the process of getting a new one, but hasn’t yet,” said Nikolai. “So this weekend [Jan. 24 and 25] we are taking three personal vehicles to our games. This can be a little difficult logistically, but we are managing and making it work. The school board is doing their best.”

The team often plays the JV teams of Door County high schools, and travels farther yet to play similar-sized teams. He thinks the farthest they will travel this year is for a tournament in Horicon.

Traveling also places more demands on the parents, who often have to chaperone the group, or have to skip watching their kids play because it’s more of a time committment. 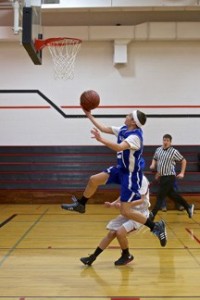 Michelle Jordan, special education teacher at Washington Island Schools, has children on the girls and boys basketball team. She said, “My family has made the commitment to go to as many of the games as possible. If the team leaves on the afternoon boat, it involves leaving work at half-day. Spending the night in a hotel is just routine for us.”

Marleen Ehrlich Johnson, mom to four members of the boys team, said, “I unfortunately do not get to go to all the games off island because of expense, time and children at home, but through text messages with other parents and my children, I’m never really that far away.”

Their transportation situation is not the only factor that marks Washington Island sports as unique. Their school district is small, the smallest K-12 public school in the state, and their numbers are made up from an array of ages and skill levels. With a smaller enrollment, kids get the opportunity to have an earlier introduction to the game and to learn from those who are much older.

Nikolai said of Spencer, “My expectations for him are way different than those of the middle and high schoolers. Spencer participates in most of the dribbling, passing and shooting drills. When we do our four-on-four or five-on-five drills he’s usually watching, hopefully learning. At that age just to get the rules down is hard enough.”

The “youngsters,” as Nikolai calls them, get a chance to play in two games all year when the team heads to Jacksonport to play against Zion Lutheran School. 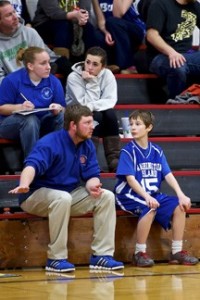 “My hopes for them are all just to learn the rules and basics of the game and to try and improve each practice…they have all really impressed me so far this season and have my hopes up for the future of Washington Island basketball,” he adds.

The disadvantage to playing on the island is obvious, especially to those who groan about taking a 45-minute trip from Gibraltar to Southern Door (or vice versa): they are hours away from their opponents. This travel time affects Washington Island athletes’ lives just a little bit more than other student athletes, the time spent traveling is time away from home, work, schoolwork. Asking about pros and cons is too simple; however, the tradeoff for traveling is indispensible, it’s community.

“One of the best parts of living on the island…is the closeness of the community. There is a proverb that says, ‘It takes a village to raise a child,’ and I feel that the community of Washington Island has stepped up to do just that to each and every one of its young members.

“Being a parent of a child in an extracurricular activity is a huge commitment no matter where you live, and unique to living on Washington Island and wanting your child to have the same sports experience as kids in other high schools requires time, effort and money,” said Ehrlich Johnson.

All the time traveling is time spent with friends, family and neighbors. Jordan, who came to the island with her family “to escape the craziness of life in the Chicago area,” adds, “You’re forced to spend a lot of time together, which in the end, will have been time that I will have treasured.”

Catch a Ferry…and a Game

When asked about what the students do on the ferry as they’re coming to the mainland, coach Pete Nikolai said, “I have them bring schoolwork to do or a book to read. Otherwise if it’s a weekend I try to use the time to go over plays, strategize or just talk basketball. I tell you what though, if we are breaking through heavy ice or it’s really wavy out, the kids are all interested in the boat ride, even though they live here.

“The boat ride is the big attraction of getting visiting teams up here, especially in the winter.”

There are still three home games left on the island, and that means there are three reasons to take a winter ferry ride to catch some Washington Island Bucks Basketball.