The turf management specialists at the Red Putter Mini Golf course in Ephraim are working overtime to prepare for the 2011 Pro Tournament. 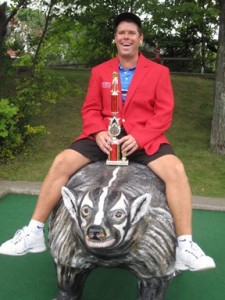 Daniel McCaslin crushed the course in 2010 on his way to a three-round record score of 101.

More than 100 putt-putters will descend on the course to brave the taunts and intimidation tactics of Bear and Badger in a battle for the coveted Red Jacket and the $1,500 first prize Aug. 6.

Last year Daniel McCaslin of Holly Springs, N.C. bested 101 other golfers in the largest tournament to date. The Red Putter Pro Tournament is sanctioned by the United States Professional Miniature Golf Association (USPMGA), which will hold the National Tournament in Myrtle Beach, South Carolina later this year. Players who finish in the top half of the Pro Tournament qualify to play in the Masters National Tournament.

Players must have recorded a score of 41 or lower since the last tournament to qualify (par is 42) and pay a $25 entry fee. The tournament includes three rounds followed by lunch and awards. Sign-in begins at 8 am, tournament begins at 9 am. A $500 pot is awarded for second place, $100 for third, and $100 for the lowest single round. The best round ever recorded at the course was a 31 by Mark Schroeder on his way to victory in 2009.