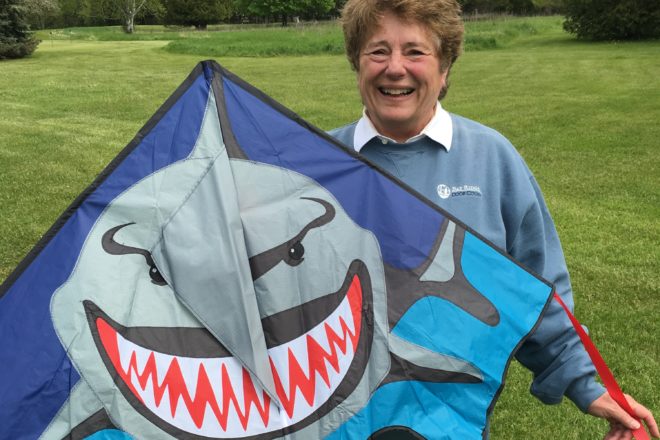 Dianne Trenchard on the green with the raffle prize. Photo by Zach Jaeger.

Nestled between the hills just south of Sister Bay is a regulation nine-hole property that might see itself a little differently than the average golf course does.At least Dianne Trenchard, who bought Bay Ridge Golf Course with her late husband Peter in 1966 and now runs the course with her son Erik Anderson, has an interesting take on their role as a golf course.

“I wish people would stop thinking of golf as just golf,” said Trenchard, who has made Bay Ridge an official event organizer of World Oceans Day, which is celebrated on June 8. Trenchard hopes to give voice to important global issues by using Bay Ridge as a platform for gatherings. “We just realized how important water was to us.”

World Oceans Day, which has been celebrated since 2002, was officially recognized by the United Nations in 2008 and has events scheduled around the globe. Last year, events involving water clean-up efforts and celebrations of recognition were organized in more than 100 countries.

“We had such fun celebrating our 50th birthday last year we decided to have annual celebrations to recognize important environmental issues,” said Trenchard in an email.

Next year, Bay Ridge will celebrate International Migratory Bird Day, which annually falls on the second Saturday in May.

Trenchard came across the date on a calendar from the Nature Conservancy, which has an office in Sturgeon Bay. In an interview, Trenchard emphasized that she did not have grand plans for this event.

“This isn’t a campaign…we’re just trying to get people together in a positive way.”

As part of the event, there will be a raffle for a kite featuring a Great White Shark made by Fish Creek Kite Co., which is no longer in business.

Bay Ridge reflects Trenchard’s sentiments about the earth. Featuring patches of long grass as obstacles, portions of the course have been strategically left to go wild.

All in all, Trenchard hopes to bring people together in the name of something bigger than the issues of our county as a way of recognizing how little we are.

“This is all for fun, but with a serious twist,” Trenchard said. “Maybe it will make [people] smile. And think.”

On June 8, join Bay Ridge and their guests all day long in celebrating the world’s oceans and waterways. Golfers and non-golfers alike are welcome.