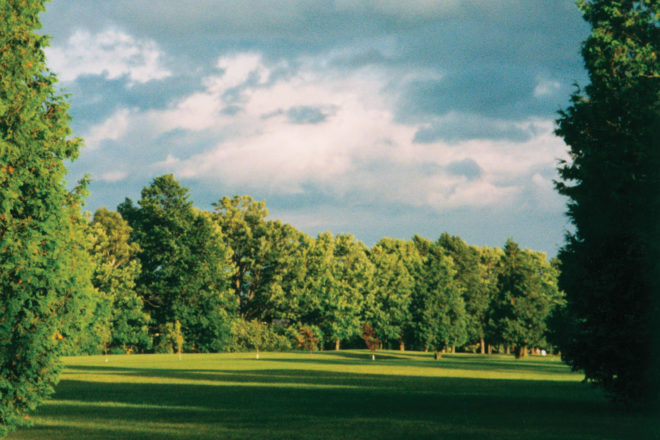 On the Fourth of July of this year, Bay Ridge Golf Course will celebrate its 40th anniversary. Meanwhile, current owners Peter and Dianne Trenchard will be celebrating their 30th anniversary of ownership.

From humble beginnings as a potato field and known in its early days as “Stony Acres,” Bay Ridge was built into the course we enjoy today. In 1964, Bill and Vy Davis purchased the land. That summer the field was in hay, and before they could begin the first phases of construction, it had to be cut, and seven hundred bales were removed. Then began the process of removing all the loose stones on the property – it would take two years as stones were raked into piles and gradually removed to form the capped greens, walls, stone piles and windrows. Irrigation trenches were dug through the underlying stone supplying water to the greens. The course was seeded with Park Kentucky Blue Grass, the clubhouse and other buildings constructed, and by the summer of 1966, it was ready to open.

In 1976, Peter Trenchard was presented with the opportunity to purchase the course. Having served on the Board of Directors for the Deerfield (Illinois) Park District, and as one of the driving forces in starting the Deerfield Park District Golf Course, he was aware of the growing popularity of golf and was ready to take on the project. That Bay Ridge was a nine-hole course made the decision easier as Peter realized that a course of that size could be managed by a single person.

Shortly thereafter, Peter met his future wife Dianne when she moved into his former position on the Board of the Deerfield Park District. By 1982, they had decided to move to Door County full time. Right from the beginning, Dianne found herself very involved in the operations of the course, right down to sometimes having to mow the greens when short staffed.

Continuous improvement has been the overriding theme of the Trenchard ownership. One of the most important of the improvements they have made to the course is bringing irrigation to the fairways. In 1984 the process of laying pipe began with an enormous rotary trenching tool, but after ruining twenty dozen teeth on the Door County bedrock, they resorted to using an excavator. As the construction continued through the summer, Bay Ridge offered special “construction rates” to keep the course open. Even with the rock debris and trenches running down the fairways, many golfers came to the course to enjoy the discount. Balls sometimes stuck in trenches or bounced off rocks, but in the end it turned out to be one of the busiest seasons for the course up to that time. The result of that past effort and inconvenience is plainly apparent today – consistently lush green fairways throughout the season, even in the driest years.

The Trenchards have also continued on a vigorous tree-planting regimen that was begun in the very first days of the course. After 40 years of planting, what was once a field of hay stubble and loose stones is now attractively wooded with dozens of varieties of native and ornamental trees. Many of the saplings that were planted in the first years now rise 50 feet over the course. Also notable are the many flower gardens in which Dianne takes a special pride. She explained, “People need to see that you are working to improve your product year after year.” The visitor will find beautiful flower gardens at the entry, the clubhouse, and at the tees and greens. The course receives improvements such as these every year. Last year a gazebo structure was added to the fourth tee.

The Trenchards decided early on that operating a nine-hole course was going to require a different management strategy than a larger course. Peter says that there is something psychologically different in being a smaller course. And, having had the opportunity to be on some of the best courses in America, he eventually realized that it couldn’t be Augusta saying, “You have to know what you want to be.” The Trenchards have found their success in working to make the course as beautiful and customer-friendly as possible.

Most of the Bay Ridge clientele are families and recreational golfers. The Trenchards have also enjoyed seeing a new trend develop in recent years – young golfers properly equipped and well trained to play, much of the phenomenon they credit to Tiger Woods and the growing mainstream popularity of the sport. Many season pass holders including local business people will come by to shoot a few holes as they have time. In fact, they have seen an increase in evening traffic as more people find time before sunset to squeeze in nine holes, which the course lends itself to quite nicely.

Of course, they have not been immune to the challenges presented by Door County’s short season or its notoriously unpredictable weather. With that in mind, Bay Ridge has maintained the policy, “always open – weather permitting,” along with an honor system that allows golfers on even when the clubhouse is not open. Together, the result over the years has been play in every calendar month. Years ago in February, Bay Ridge had customers arrive with both their clubs and cross-country skis packed. After they finished their winter round of nine holes, they explained that they had no idea what the weather would be like in Door County when they left home. As the Trenchards see it, “Why not be available for people.”

In recent years, Peter and Dianne have been spending even more time around the course. Since the sale of Cherry Hills Golf Course in 2004, which the Trenchards had owned and operated since 1986, they have been focused on Bay Ridge. They are quick to credit the improving conditions over the past couple seasons to the work of the grounds manager, Paul Crittenden. “When he started working here, things really started to get good,” says Peter.

Bay Ridge is a large part of the Trenchard family history. They themselves were married on the seventh tee in 1982. Making it into a tradition, Dianne’s daughter Kim was married at the same spot 20 years later. With this extensive collection of memories, and an equally extensive collection of photo albums documenting events at Bay Ridge, Peter and Dianne have no plans to leave. As they say, “This is our retirement.”