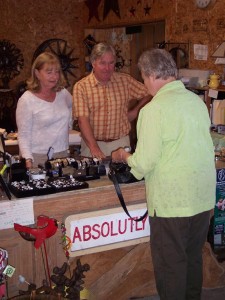 “Spend money!” he says as a family enters the door of the Bay Trading Company. “It’s good for you! It’s good for the country!” And then he laughs. He turns to a little girl in the family. “Are you going to spend money?” She giggles and shrugs, and he laughs with her.

Terence Thompson borrowed his patter from a rug merchant in Istanbul. “My wife Linda and I have been in a lot of shops,” Thompson said. “And a lot of individuals go into shops and are never acknowledged. We like to acknowledge customers and want them to have a good time.”

While the Bay Trading Company just south of Egg Harbor officially deals with decorative architectural salvage items, the business is also a treasure hunt with a bit of theater as well.

“This is a fun business,” Thompson said. “We have people who come in all the time and bring their friends, their guests, just to show them what’s here!”

What’s here is not just an antique mall, although Thompson and his wife Linda rent space to about 20 vendors. About two-thirds of the area is filled with their own merchandise, which includes stained glass windows, fireplace mantels, and other architectural salvage items.

“In the beginning,” he explained, “the architectural pieces were exclusively from the Chicago, Milwaukee, and St. Louis metropolitan areas. Now we have items from Afghanistan, Thailand, Vietnam, Argentina, and countries in Eastern Europe.

“I have developed a working relationship with about seven importers who know what I want,” he said. “I talk with them on the phone, they send pictures, they make it possible for me to find unique items.

“We have changed slightly from architectural salvage,” he continued, “into more architectural décor, including reproduction and decorative items.”

As visitors approach the huge building housing the Bay Trading Company, they walk though a maze of statues and fountains and urns and decorative iron work and other eclectic garden ornamentation. A woman from Minnesota found a mill wheel that interested her. “My first wife hung that around my neck!” Thompson told her. She laughed and made her purchase.

A step inside can be a bit overwhelming because of the vast array of merchandise. “Of the shops carrying salvage and reproduction architectural items,” Thompson said, “we’d be one of the largest in the Midwest. Maybe one in Chicago or Minneapolis might have more inventory, but we’d be one of the top four.” Customers who thread their way through the labyrinth of iron grill work, columns, doors, and light fixtures will probably not dispute his claim.

“We have a big collection of antique nautical stuff,” Thompson said, “a big thing up here.” A business friend in Newfoundland who deals with salvaged North Atlantic ships provides him with pieces.

While the company sells salvaged ceramic tiles, Thompson has amassed a private collection numbering more than 500 dating from the 1880s to the early turn of the century. He favors those that depict human faces, animals, birds, and scenes. Many of them command high prices.

“Everything is for sale!” Thompson calls to a customer who had inquired about a piece, “everything but my wife!”

He credits his wife for his success with the enterprise, now in its 15th year of operation. “My wife is the total brains of this business,” Thompson said. Linda Thompson has a background in accounting. “She does all the stuff Terence hates to do,” he laughed, “which is quite a bit!”

The Bay Trading Company came about as a retirement vehicle for Thompson. He had worked for the Waukegan school system, first as a business teacher, then a counselor and finally an administrator. For 10 years he coordinated an evening program through Columbia College that allowed military recruiters and others to work toward a four-year degree.

Thompson was also a partner in a salvage company, work that provided him with experience and connections that made Bay Trading Company a natural outlet for him. When he retired from teaching eight years ago, his seasonal Door County business was already operational. “I had thought it would take several years to get off the ground,” he said, “but it has exceeded my expectations.”

Two aspects of his company especially appeal to Thompson. “I like the restoration of items that otherwise might have been discarded,” he said. At a time when people are trying to think green, when recycling is becoming a way of life, architectural salvage makes sense.

“And secondly, we draw to this business the most creative people you will ever meet,” he added. “They are fun, they have vision, they have a zest for life! They have ideas; the creativity is so fertile!”

Several owners of bed and breakfasts in Door County have used the Bay Trading Company as a source for vintage building materials in the restoration of old houses.

“I like the idea of items being recycled,” Thompson said. “To a degree this is a recycling business. Most of the buildings where these items come from have passed their useful life.

“Very few historic buildings are torn down now,” he said. “Twenty years ago, it happened, but not now.”

Because Bay Trading sells both antiques and reproductions, ethics are important in the business. “We have old items that look new, and new items that look old,” Thompson said. “I know the difference and I tell them. I know the answers to how old it all is, where it came from.” He laughs. “Even if I wasn’t honest, my wife is!”

Safety is an issue with salvage materials, especially regarding lead paint. “Some of the old fireplace mantels have had as many as 30 layers of old lead paint,” Thompson said. These pieces are carefully stripped and sanded before they are sold. He will not deal in antique molded tin ceiling tiles because of lead paint; he only will sell reproductions.

Historic lighting is not only cleaned and polished before it is sold, but also rewired for safety, sometimes with modern cords that imitate vintage cloth covered wires.

Energy usage is also a concern for doing business. “We have a commitment to have a low energy consumption building,” Thompson said. “We have neither heat nor air-conditioning.” Seasonal operation and cool breezes off the bay make this goal feasible.

“Door County is in a position to take advantage of the energy problem,” he said. “A lot of people are about one tank of gas away, and you can’t beat Door County in the summer!”

Thompson’s marketing plan is simple. “We have a low markup, so we need volume. Because we are only open for six months, we must move merchandise quickly so customers see new items constantly.”

He spends the other six months in Florida. “I call my friends who stay up here for the winter and laugh at them! I’m such a bad person!”

When his grandmother moved to Florida for her retirement, Thompson saw the quality of her life improve. That lifestyle appealed to him.

But for the present, “We have a ball with the people who come into Bay Trading!” Thompson said. “Down the road, at some point, we will need to retire again. Now that I’m on Medicare!”