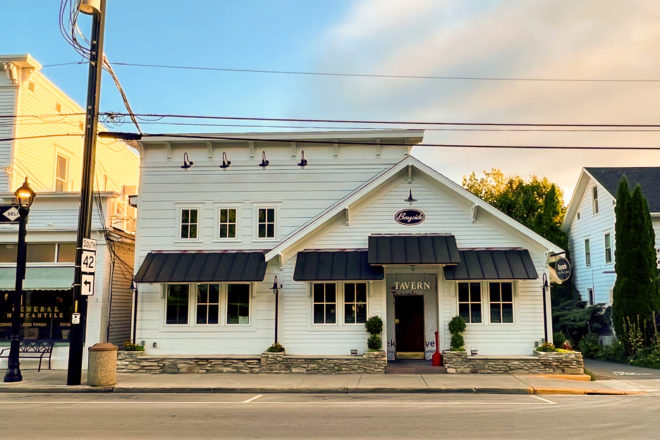 After 100 years on Main Street, the Bayside Tavern was overdue for a facelift. The overhaul of the facade of the Fish Creek watering hole is now complete and meeting rave reviews from customers and casual passersby.

On a recent Tuesday morning, a group stopped out front as co-owner and bar manager Bobby MacDonald was inspecting construction progress.

“Are you the owner?” one woman asked, excited. “I just want to say that I love what you’re doing. It helps the whole street.”

The building was last overhauled in 1970, when a shingled, angled roofline that sort of looked like a mansard roof was built over the old face.

“The original front of the bar was still inside that facade,” Bobby said. “It was kind of neat to discover it in there.”

Bobby, who began helping his mother run the business about eight years ago, started thinking about the update a couple of years ago. But he knew he had a small hurdle to clear with his mother, longtime owner Elaine MacDonald.

Decades earlier, Elaine and her late ex-husband, “Smilen Bob” MacDonald, had considered renovating the facade of the building, but they were turned off by the drawing produced by the architect they’d hired. Bobby wanted to raise the idea of restoring the look of the grade school the building once was.

“I thought the 100th anniversary was a great opportunity to bring it back to its historic look,” Bobby said, “but I knew she always hated the drawing from years ago.”

He scratched out an idea on a napkin and showed it to his mom. To his surprise, Elaine told him to throw out a guess about what he thought it would cost, then told him to go for it – and he did. The cost, of course, exceeded the estimate, but Elaine is still happy with the final product.

The update didn’t add space, or tables, or living quarters. It just looks better, thanks to the work of the many hands who brought it to fruition.

Architect Amy Molepske turned the napkin into a drawing to resemble the original building as much as possible. Stonemason Randy Wilke redid the planters out front and lowered portions to create the new, integrated benches. Friend and customer Bob Wise lent his woodworking talent to the awnings on the front, handcrafting the braces and corbels. And Paul LeClair and his crew from Hibbards Creek Construction brought it all together.

The final product is a nod to Fish Creek history, and although the new windows let a little more light into the bar, there are still the same, friendly Bayside stools waiting for you.

1870s: A schoolhouse is built at the site of what is now the Fish Creek Community Center.

1922: Myron Stevens buys the schoolhouse and moves it to the location that is now the Bayside Tavern. He opens the White Front Pool Hall and Soft Drink Saloon.

1924: Bill Pelke purchases the saloon and renames it Bill’s Bar. Bill and his wife, Rosabelle, operate the tavern for 46 years.

1970: Roy and Millie Wolters purchase the bar and change the name to Bayside Tavern. They paint the facade yellow; remodel the building with a shingled, off-center roof; and install smaller windows.

2022: A facelift restores the tavern to a look similar to the original schoolhouse.