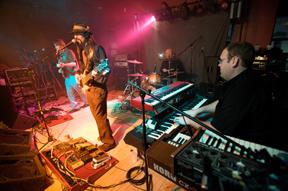 Since getting their start at open mics around Door County in 2001, Little Marsh Overflow (LMO) has been rocking the Midwest. Originally a six-piece lineup, for the past five years LMO has consisted of four members – Joshua Gregory, Wade Coisman, Mark Weber, and Kai Andersen.

Each of the band member’s musical roots stretch back to an early age. Gregory always tinkered with piano, but once he learned music theory, he believes it “really opened the door.” He has been mastering the keyboards since, similar to Coisman, who got his first bass for Christmas in ’94 – a “Fame” by Hondo with a zebra paint job. “I haven’t looked back since,” he said. 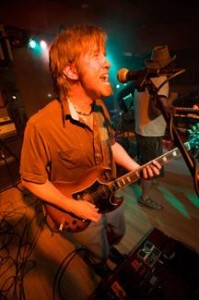 Weber’s introduction to instruments came 22 years ago with drums and bass then naturally progressed onto guitar, while Andersen started playing music in second grade, “first the piano, then I picked up the drums and guitar in seventh grade,” he said. “Though drums were my ‘thing’ I had always wanted to play guitar.”

The band found its name early in the morning.

“We’d put off coming up with a name until band practice the night before our very first show (opening for ‘Elastic Waste Band’ at the Bayside),” said Coisman. “Wanting nothing more than to play music, [that’s what] we did.” He continued, “Around 3 am, when we finally decided to call it a night, we realized we had yet to address the issue of the elusive band name.” 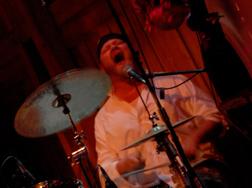 “Mark wanted to call us the Little Marsh Band or something to that effect,” said Gregory.

“The name came from the road I lived on at the time and the place where we practiced, Little Marsh Road,” said Weber.

“Craig, our percussionist at the time, was heavily lobbying for ‘Evolution Overflow.’ Getting nowhere we decided to compromise on ‘Little Marsh Overflow’ with the intent of changing it sooner than later,” said Gregory, “nine years later…” 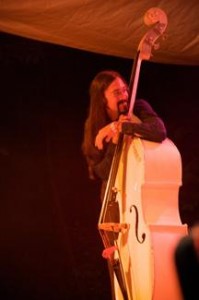 Nine years later, the current band members are still rocking the name and continuing their involvement with all things musical. Gregory and his wife, Gwen, recently moved back to Door County and host an open mic at the Hitching Post every Wednesday. Weber and his wife Erin care for daughter Ava; he also runs Pressure Wall Productions, which does recording, live sound, and festival promotion. Coisman plays with another band called Underground Day 1 (undergroundday1.com) as well as sitting in with various bands and musicians. Andersen drums with Jose and Sumlimes (Sublime Tribute band), is a drum instructor, and a Radio DJ for Madison’s 94.1 JJO.

LMO also organized Nasewaupee Music Festival in 2009. Weber, Gregory, and Coisman were instrumental in planning the festivities while Andersen was the weekend emcee. Keep your eye out for a repeat of this music- and fun-filled festival in 2011, as well as other LMO comings and goings. 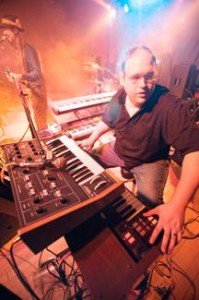 Still residing in Madison, Weber, Coisman, and Andersen are currently working on a new, all original project that has yet to find a name. Sound familiar?

Although being in separate cities is limiting the number of shows they’re playing, LMO will be making appearances throughout the county, including the Bayside on July 31 at 10 pm.

For other upcoming shows visit http://www.littlemarshoverflow.com.