Just as everyone can be Irish on St. Patrick’s Day, so everyone has the opportunity to enjoy all things Belgian on Belgian Days in Brussels July 12 & 13.

This is the 53rd annual celebration sponsored by the Brussels Lions Club, making it one of the oldest continuing events in Door County. The club was formed in 1960, and members soon realized they needed a fundraiser to support the projects that support the motto of Lions International: We Serve.

“In the beginning, Belgian Days was held on the parking lot of what was then Coun’s C Club,” says Jim Noll, club treasurer. “There was a tent with food, beer and some music. That was pretty much it.”

Things have changed! Long ago, the event moved to the town park, and the club has devoted a lot of time and money to develop and maintain the 16-acre site.

For the past several years, the Big Dogs Youth Baseball Tournament has been held in conjunction with Belgian Days. This year, 23 teams will compete, beginning on Thursday night, with the championship game late Sunday afternoon. 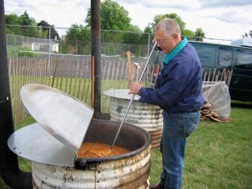 Arts and crafts booths will be open from 10 am to 4 pm both days. A co-ed volleyball tournament and a Cooyah card tournament will both begin at noon Saturday. Noll notes that two-person teams ranging from a grandfather and his 11-year-old grandson to those in their 70s participated in last year’s Cooyah tournament. (Anyone who’d like to learn to play can probably find a willing tutor.) For little tots, there will be games operated by students from the Southern Door School District.

The Belgian Days parade is set for 10:30 am Sunday. (“A half-hour later than in the past,” Noll says, “because there won’t be the frequent traffic stops that were required when we had to cross a state highway.”) There’s no entry fee; just show up on Highway C north of town. Noll promises there will be lots of candy.

Two main aspects of the two-day event are food and music. The food represents the community’s Belgian heritage: chicken booyah; Belgian trippe, cooked cabbage, pork and spices, deep fried, simmered in “secret sauce” and served on a bun like a bratwurst; and Belgian jutt, composed of boiled potatoes, spinach, onions, nutmeg, bacon grease, salt and pepper. (Hamburgers will also be available for those with less venturesome tastebuds.) And, of course, there will be Belgian pies – a variety of fruit or rice concoctions with a sweet bottom crust and a topping of dried cheese.

Live music from 7 to 11 Saturday night will be provided by Spice, a band formed in the early 1970s and still including three of the original members, Dan Dufed, Ken Schaefer and Dan Vogel. The group is making only limited appearances since the death of long-time member Bob Skornicka in May 2013. The Modern Day Drifters, who describe their style as “classics and new country,” will play from 11:30 am to 4:30 pm on Sunday.

A $2 lottery ticket is all that’s needed for entry to the grounds both days. It may also win the purchaser one of the 45 raffle prizes to be given away at 4:30 pm, Sunday. (Winners need not be present.) First prize is $500 cash, and the list also includes a $250 gift certificate from T. Simon Jewelers, two-night stays at resorts or rental properties, meat from Marchant’s Foods, weekend camping passes, rounds of golf at Idlewild Golf Course, and lots of additional cash prizes and gift certificates. “Because everyone knows this is our only fundraising activity of the year, the community is very supportive when we ask for donations,” Noll says.

The 30 men and women in the Brussels Lions Club put the profit from Belgian Days to good use in their own community and beyond. A grant from the DNR about 10 years ago, combined with their own funds, enabled them to plant lots of trees in the town park and to construct a walking trail, community gardens, shelters and a stone privy. Each year, three or four $1,200 college scholarships are awarded to Southern Door graduates. This summer the club will paint a 17’ x 27’ map of the United States on the elementary school playground. Checks are routinely sent to families in the community who lose their homes to fire or experience devastating illnesses. Medical equipment is loaned free of charge to Brussels residents. In the summer, the Lions sponsor a six-week baseball skill-building program from T-ball through middle school levels. 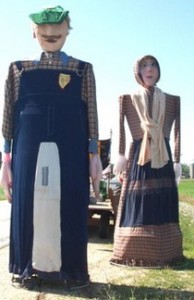 When the Door County Health Department discontinued vision screenings of school children several years ago, the Lions Clubs in the county took over the project for all schools and day cares. The 72 clubs in northeast Wisconsin jointly purchased 11 special cameras that enable screeners to detect potential problems that parents can follow up on.

The local club contributes to the effort of Lions International to wipe out “river blindness,” a disease caused by a tiny worm, through the bite of infected blackflies that breed in rivers, primarily in Africa. Brussels Lions are also strong supporters of the 440-acre camp at Rosholt, Wis., that provides activities for hearing-impaired individuals and blind and cognitively impaired children and adults who might not otherwise have the opportunity to experience.

The income from this year’s Belgian Days will bring the amount of money the Brussels Lions Club has put back into worthwhile projects in the community and beyond to more than $500,000. A $2 raffle ticket will let you be a part of their good works…and perhaps win you a fine prize, to boot!