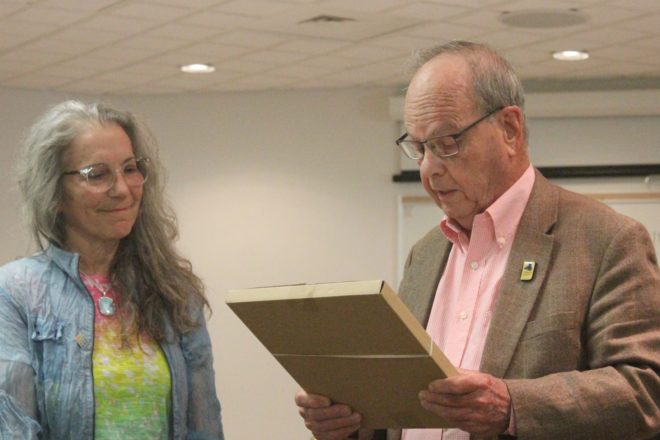 Mayor David Ward (right) reads a proclamation June 7 to present to Open Door Pride founder and chair Cathy Grier in declaration of June being Open Door Pride Month in Sturgeon Bay for the sixth year in a row. Photo by Kevin Boneske.

When Open Door Pride (ODP) founder Cathy Grier first moved to Sturgeon Bay in 2016, she asked a local lesbian couple, “Where are we?”

As a lesbian herself, Grier wanted to connect with the LGBTQ+ community in the area, but she had no idea where to start.

She was met with blank stares.

“This is Door County” were the replies she said she heard back then.

If the phrase six years ago suggested a lack of visibility and community felt by the area’s LGBTQ+ residents, “this is Door County” now has more hopeful implications. Today, rainbow flags adorn many local businesses; LGBTQ+ community programs such as the annual Pride event attract participants from all over the county; local legislators have shown their support; and the City of Sturgeon Bay proclaims June as Open Door Pride Month.

“Door County has become such a progressive place,” said Owen Alabado, founder of Northern Door Pride. “It’s a beacon of diversity and inclusion in northern Wisconsin.”

But it didn’t always feel this way. Door County has long been home to LGBTQ+ residents, including many older gay and lesbian couples, according to Alabado. But until recently, many felt pressured to “stay out of the way,” not wanting to risk harassment or rejection by coming out.

Although LGBTQ+ adults could often keep to themselves, many LGBTQ+ children and teens didn’t have a choice. Alister Kohls, an Northern Door Pride board member who grew up near Carlsville, remembers classmates calling them slurs when they attended Sevastopol High School as a queer teenager in the early 2000s. (“Queer” is an umbrella term for people who do not identify as heterosexual or cisgender. It has historically been used as a slur, but it has been reclaimed more recently by some members of the LGBTQ+ community.)

Kohls had no one to help them face their peers’ bigotry, no openly LGBTQ+ friends to relate to, and no “out” community members to look up to.

“It was lonely,” Kohls said.

To combat this sense of isolation, Grier posted a newspaper ad in 2016, which proposed an LGBTQ+ meetup at a local restaurant. The eight or so people who showed up decided to form the organization that became Open Door Pride in 2017.

More Than 65 Businesses Are Flying Pride Flags This Year

Since its inception, ODP has subtly changed the landscape of Door County to become more accepting and inclusive. Perhaps the most visible example of this is the Pride flags that now wave at many local homes and businesses.

Thanks to Open Door Pride’s Pride Flag Initiative, any local business that wants a pride flag can receive one for free. When the initiative started, ODP board member Steve Makovec said about 12 businesses displayed Pride flags in June. This year, more than 65 businesses did.

To Grier, these flags are far more than decorations.

“Why do you fly your Pride flag?” Grier asked. “Because of that one kid that might be sitting in the back seat of their car, having been bullied by somebody. Or somebody comes to town and tells me ‘the reason I moved here from Madison is because I was looking at an apartment right across the street, and I saw your flag, and I saw their flag, and I saw two other flags, and I thought, I could live here.’”

How Can You Celebrate Pride?

• Throughout June, Destination Door County will offer an interactive What’s My Pride? selfie station, as will the M3 gallery every Saturday during the Sturgeon Bay farmers market.

• Open Door Pride will have a tent at the Sturgeon Bay farmers market every Saturday in June to answer questions and have conversations.

Inroads Have Been Made, But Discrimination Is Still Present

Grier’s experiences displaying her Pride flag indicate that homophobia remains an issue in Door County. Her flag has been stolen multiple times, and she has replaced it over and over.

The same happened to ARTicipation Studio & Gallery owner Claudia Scimeca, an ally who has flown the flag in front of her gallery since it opened last May. For Scimeca, the flag’s disappearance offered a chance for the LGBTQ+ community and its allies to come together.

Scimeca posted about the incident on social media and was met with an outpouring of support from other businesses and community members. Open Door Pride offered her a new flag, and her landlord, who was also a member of the LGBTQ+ community, built Scimeca a taller holder so the flag would be more difficult to tamper with.

Still, many instances of homophobia do not have such happy endings. Grier knows several former Door County residents who moved to cities such as Milwaukee and Green Bay to escape incidents of bigotry and feelings of isolation.

“One of the first [donations] we received was from someone living in Madison, saying, ‘I left Door County because I didn’t have what you have now,’” Grier said.

As the area becomes more accepting, this becomes less of a problem, according to Grier. But the fact that LGBTQ+ people are still experiencing discrimination and parents are still disowning their kids is proof that ODP still necessary, Alabado said.

Members of the pride organizations have various ideas about how to address these issues. For example, Kohls hopes for more legislative action to ensure clear municipal protections for LGBTQ+ people, as well as countywide ordinances banning gender- and sexuality-based discrimination. In 1982, Wisconsin was the first state to ban discrimination on the basis of sexual orientation, but those protections do not extend to trans people specifically.

“You can’t technically discriminate against someone because they’re otherwise queer, but you can based solely on their transness, and we need to be changing that,” Kohls said.

“That mental abuse from society, from your family, from your peers affects a child’s psyche,” Alabado said.

To reduce this emotional trauma, Alabado hopes to create a mentorship program for LGBTQ+ youth, and Open Door Pride vice chair Michael Meulemans said a scholarship for LGBTQ+ high school graduates is in the works. Makovec is currently working on a diversity program at Sevastopol High School, providing teachers with Pride pins to distribute to their students.

All three stressed the importance of showing LGBTQ+ kids that they aren’t alone and that they have a community of people who are ready to support them.

“If your mom doesn’t support you, I’m your mom now,” Alabado said.

Grier realizes that the change ODP strives for won’t happen overnight. But she knows that small choices, such as supporting LGBTQ+-friendly businesses and calling out homophobic comments, make a big difference.

“We’re getting there,” Grier said.