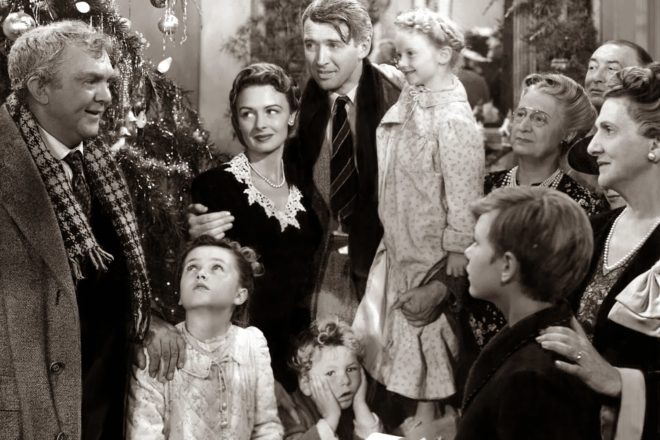 Still from “It’s A Wonderful Life,” one of many films editor Jim Lundstrom suggests you make time for this holiday season.

Frank Capra’s It’s A Wonderful Life became a beloved Christmas classic due to a clerical error that allowed the 1946 film’s 28-year copyright to expire in 1974, which meant the film fell into public domain, making it accessible to TV stations across the country for airing during the holidays.

That clerical error turned out to be a little piece of magic reminiscent of the film, because without that television revival, It’s A Wonderful Life could have been forgotten.

I know that’s hard to believe because today It’s a Wonderful Life is a holiday icon, but it was such a commercial failure upon its initial general release in 1947 that it sank Liberty Films, the independent production company Frank Capra had established after his discharge from the Army at the end of World War II with three other war veteran filmmakers – producer Samuel Briskin, and directors George Stevens and William Wyler.

Despite an overexposure to It’s A Wonderful Life during its public domain revival, George Bailey’s angelic rescue from the pit of despair and Christmas reunion with his family still brings tears of joy.

I love that movie and Christmas movies in general because they show us at our best. 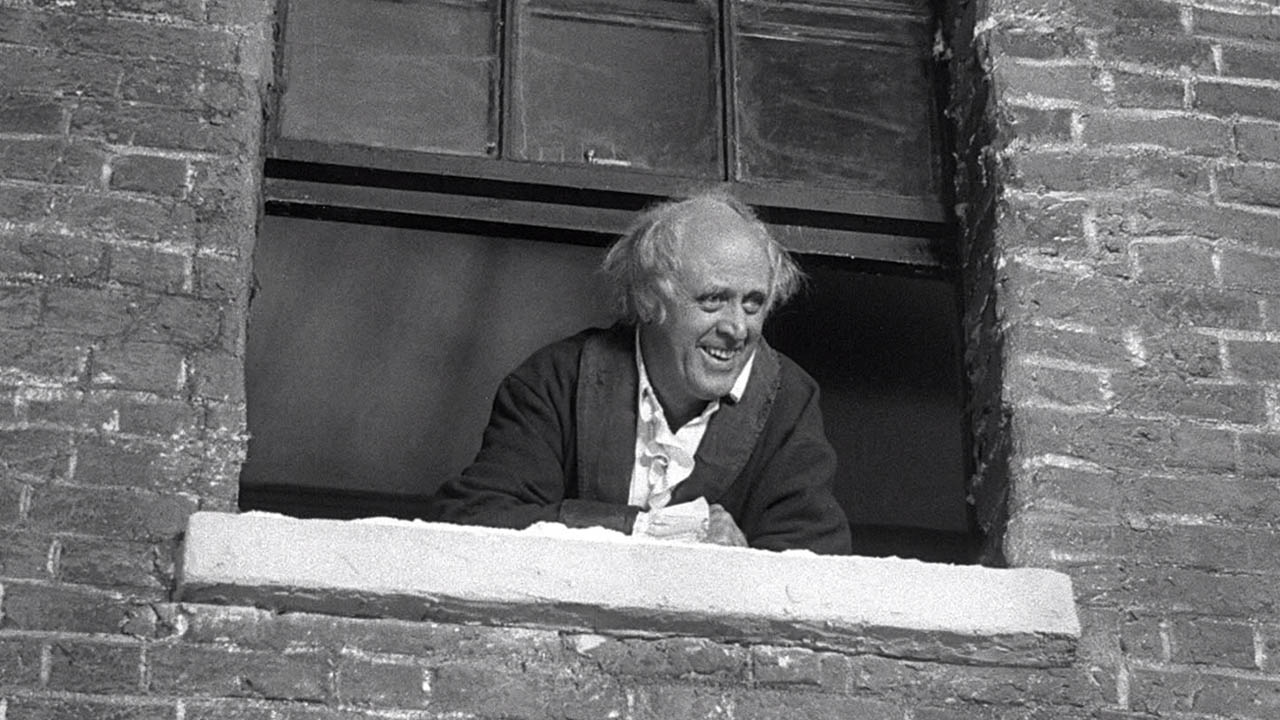 Still from A Christmas Carol.

Alastair Sim’s 1951 portrayal of Ebenezer Scrooge is my favorite version of Dickens’ A Christmas Carol, but I have to mention the Boomer childhood favorite that recently popped up on Amazon Prime, Mister Magoo’s Christmas Carol (featuring the great Jim Backus as the voice of the myopic millionaire).

The holiday season has to include a viewing of A Miracle on 34th Street (1947), with Edmund Gwenn as a believable Kris Kringle and little Natalie Wood in a great role as a skeptic who comes to believe.

Mock-Italianicizing the word “fragile” into “fra-gee-lay” has been a way of life in my world since first seeing A Christmas Story in the theater in 1983.

There are many more well-known Christmas movies, but let’s dig a little deeper into the Christmas film pie for a few rarely seen plums, beginning with the 2010 Finnish gem, Rare Exports:  A Christmas Tale.

The hero of this dark fantasy is a boy who knows the old Finnish tales of a giant horned Santa who did not spare the rod on naughty children. Archaeologists unearth a giant block of ice that ancient bad Santa had been frozen in by Lapps and then buried beneath a mountain of rock. His find unleashes hordes of naked old men who turn out to be bad Santa’s minion elves. Only the boy, who has read about the cultural history of his people and Christmas, can save the day. A grim but ultimately fun Christmas story. The punch line is delivered in the final scenes. 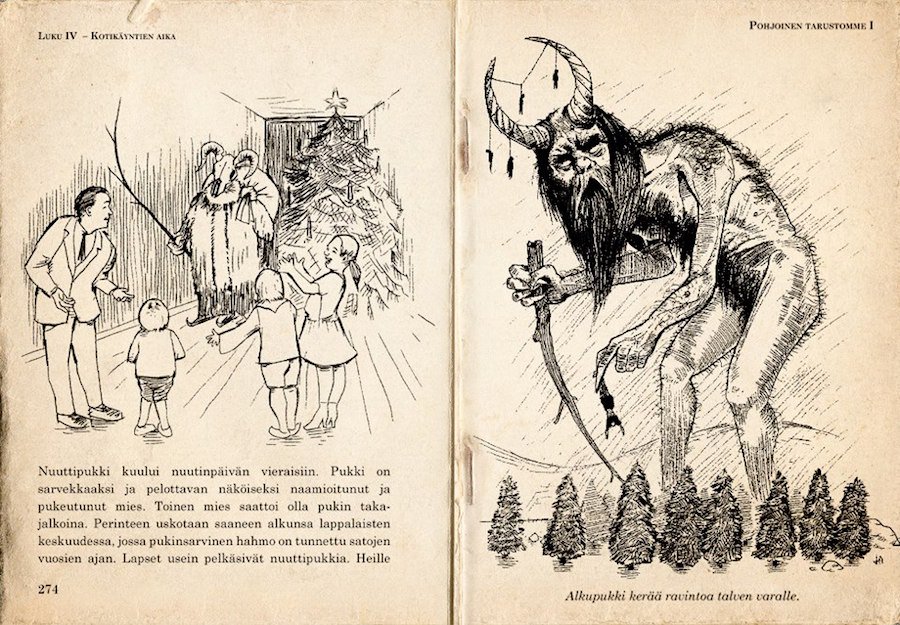 Opening as it does with “Jingle Bells” morphing into “The First Noel” as the titles are shown on Christmas cards, you might think Lady in the Lake (1947) is going to be a traditional Christmas flick, but you would be dead wrong.

Here’s what sets it apart from just about any other Christmas flick out there – star Robert Montgomery made his directorial debut with this film, and his idea to bring Chandler’s first-person storytelling to life was that the movie unfolds from Marlowe’s point of view. His eyes are the camera. So when he gets punched in the face, we can only watch the fist coming at us. In fact a punch in the face he receives from a doomed gigolo might have been the first 3D movie effect.

We meet Montgomery as Marlowe in an introduction he uses to speak directly to the audience. We never see him again in the movie unless he is reflected in a mirror, which happens a number of times.

It’s a very odd thing that you have to see to believe. If you are able to stick with the convoluted story, it’s worth the ride. Chandler’s book takes place in summer. Moving it to the holidays makes an interesting counterpoint to all the deep-seated nastiness that comes bubbling up from various characters, including the cops. Everyone seems dyspeptic in Chandler’s world.

Montgomery was an interesting character. Like JFK, Montgomery served as a PT boat captain in the Pacific during World War II, and then played one after his three-years of service in John Ford’s They Were Expendable.

In 1947, Montgomery was one of the few “friendly” filmmaking witnesses who appeared before the House Un-American Activities Committee that was looking into Communist influences in Hollywood (Ronald Reagan was another).

He is also the father of actress Elizabeth Montgomery of the 1960s TV show Bewitched. 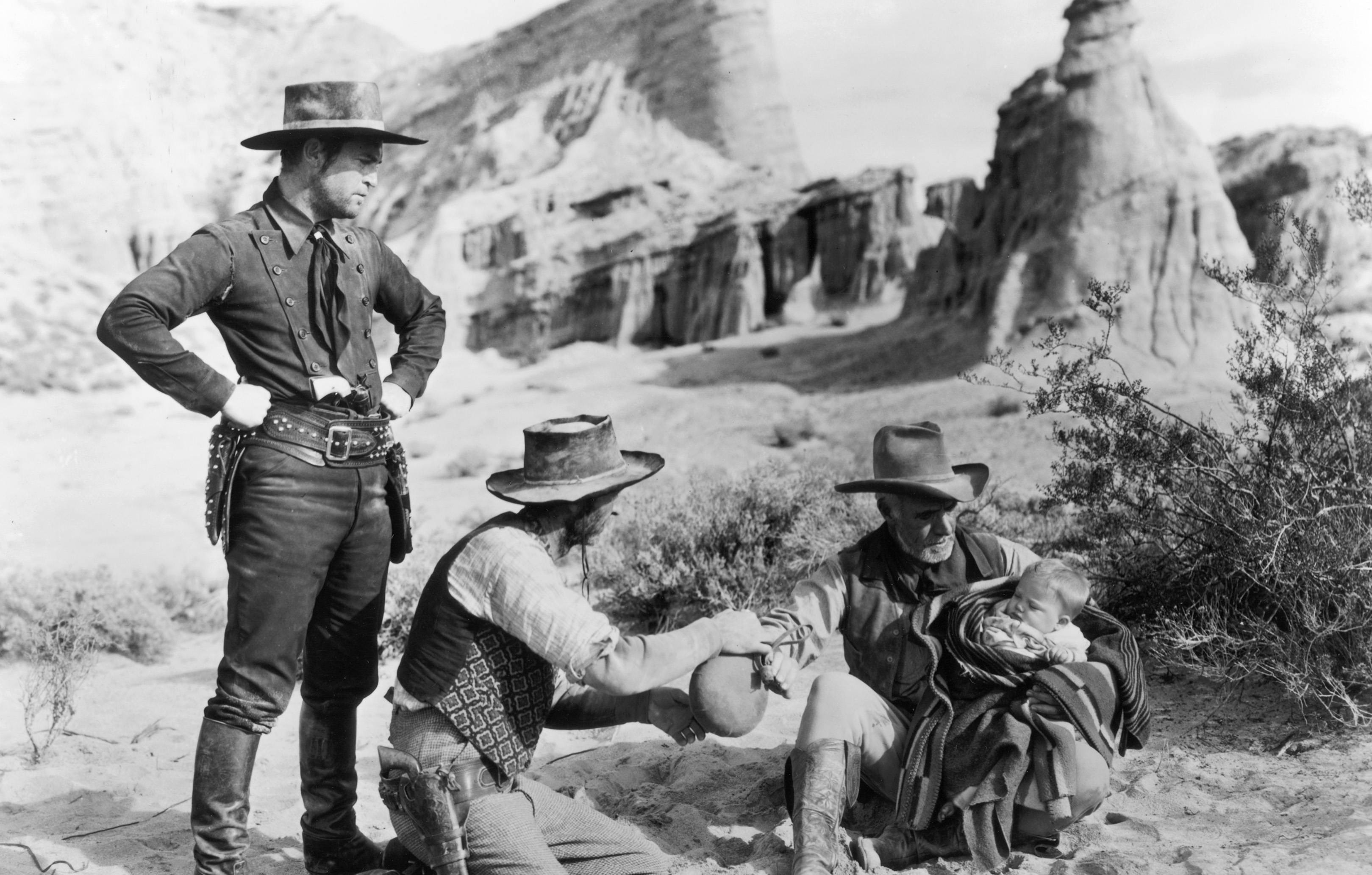 In 1948 John Ford made the definitive version, dedicating it to Harry Carey, who died that year, and introducing Harry Carey Jr. in one of the title roles, along with Pedro Armendáriz and John Wayne, portraying three down-on-their-luck cowpokes who decide to rob the bank where Buck “Pearly” Sweet (Ward Bond) is an indefatigable marshal who won’t let the gang get away.

The standard western scenario is given a twist when the three men discover a dying woman about to give birth to a child. After helping to deliver the child, the woman names it after the three men and asks them to promise to take care of the child.

Even though John Ford often assigns a major role to the landscape of the American southwest in his movies, the desert in this film could get equal billing with any of the actors for it is just as relentless in its persecution of the three outlaws as Bond’s character is.

The Christmas connection? It’s Christmas Eve as the titular characters attempt to make their way through the desert with the child to the closest town, New Jerusalem. Enough said? 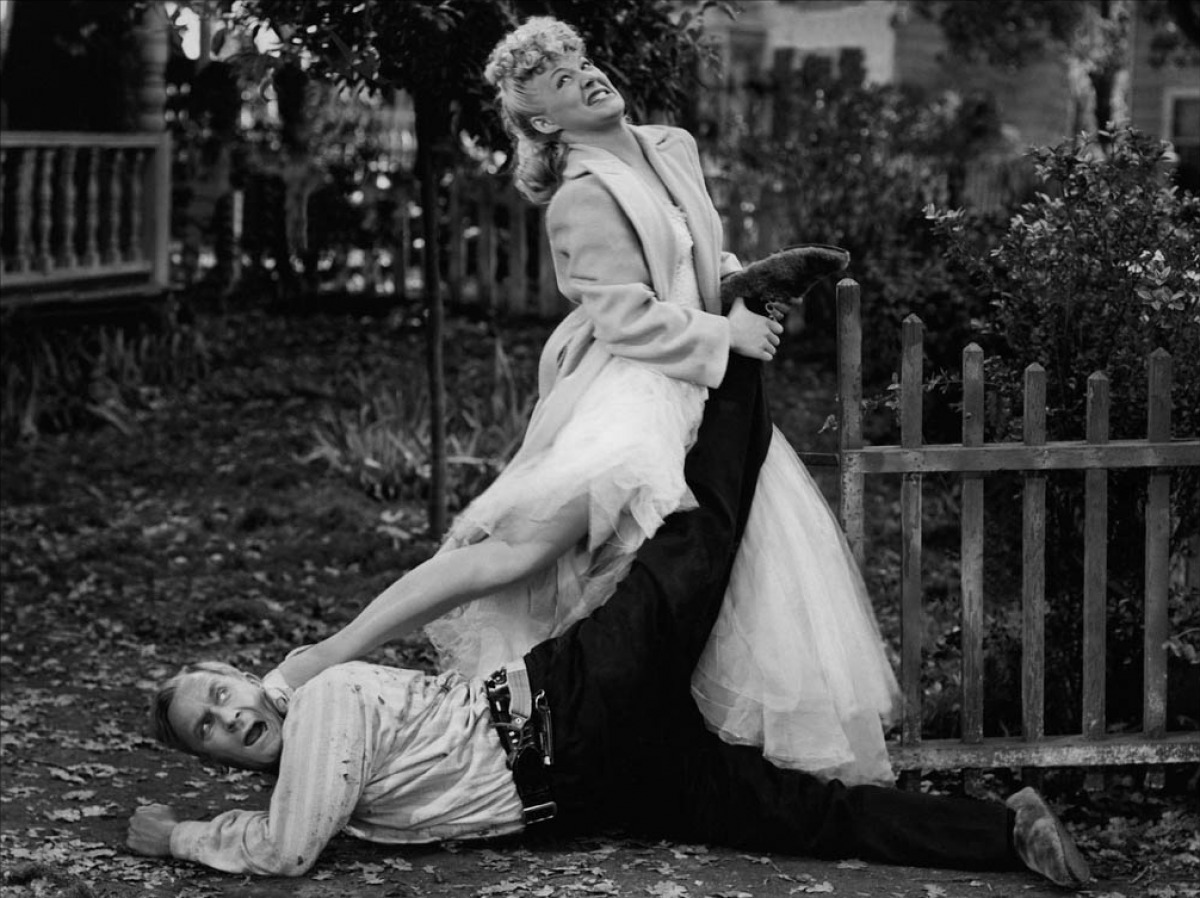 And simply for the sake of including one of my favorite directors of screwball comedies and ensemble casts, two Preston Sturges’ movies must be mentioned, even though Christmas has a very small role in each. No matter, because they are well worth watching.

Christmas in July (1940):  While Christmas only appears in the title of this movie, I include it because more people need to watch the work of Preston Sturges and his acting ensemble, which includes great character actors such as the oily Franklin Pangborn, gravel-voiced Al Bridges, the explosive William Demarest, and the endlessly amusing Raymond Walburn. The plot revolves around the winner of a marketing slogan contest, who brings prosperity (Christmas) to his neighborhood.

The second Sturges’ movie that nods its head to the holidays is The Miracle Of Morgan’s Creek (1944). It’s a wartime screwball comedy that ends with Christmas and sextuplets. Betty Hutton is fabulous as hard-partying Trudy Kockenlocker. William Demarest is her easily irritated father, local cop Constable Kockenlocker (it was the eighth of 10 films Demarest made with Sturges), and Eddie Bracken – the perfect representative of everynerd – is Norval Jones, the schlep who has greatness thrust upon him by being the “father” of sextuplets.

The small things from the bit part actors are the biggest reward in all of Sturges’ films.