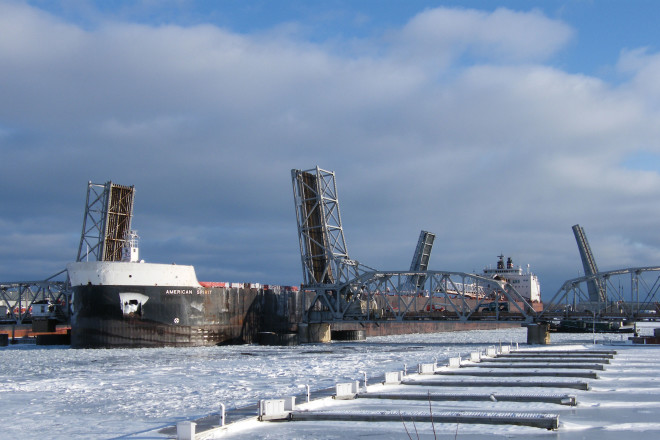 A massive cargo ship makes its way through the Sturgeon Bay shipping canal at the Michigan Street Bridge. Photo by Derek Lund.

Have you ever stood on shore and spied a massive Great Lakes vessel making its way across the horizon? If so, you may have wondered what type of ship it is, what cargo it carries, and from whence it hails. In the pages here, you’ll find at-a-glance answers to these questions along with resources for sleuthing your own answers upon the next sighting.

The North American “laker” is a special type of vessel specifically designed to handle cargo on the Great Lakes. These ships may be referred to by their design or cargo, with names such as oreboats (carriers of iron ore), straight deckers (without self-unloading gear), bulkers (which carry bulk cargo), sternenders (all cabins aft) and longboats (due to their slender appearance). Approximately 140 lakers are currently active on the Great Lakes, transporting materials such as iron ore, coal, limestone, grain, cement, salt and steel from mines and fields to more populated industrial areas. 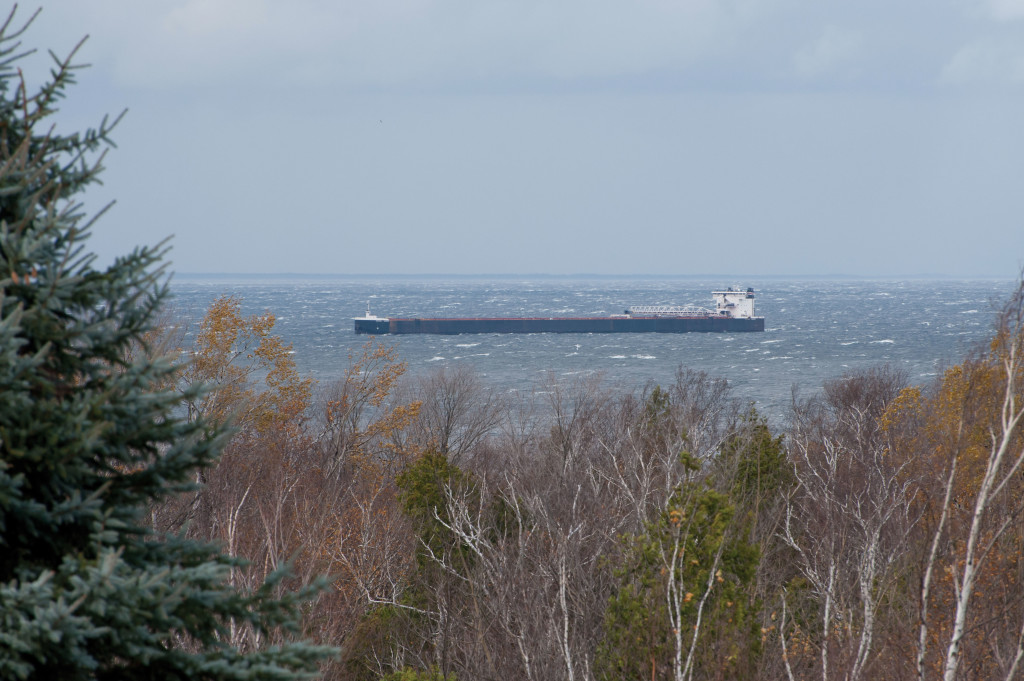 The massive ships making their way to Sturgeon Bay and Green Bay can be a startling sight on the horizon. Photo by Dan Eggert.

The typical laker is 600 to 700 feet long, diesel powered with speeds of up to 15 knots and a crew of 27. The ships vary significantly in configuration and cargo capacity, hauling anywhere from 10,000 to 40,000 tons per trip. Highly efficient, a ship can move a ton of freight over 600 miles on one gallon of fuel. The average lifespan of a laker is 40 to 50 years and many are far longer than that, even exceeding 100 years.

Lakers are bulk carriers, meaning their cargo is carried in large contiguous holds, not packed in containers. The current fleet of U.S. vessels is comprised primarily of self-unloaders. (The concept of a self-unloading system was pioneered by Door County businessman Leathem Smith in the 1920s.) Self-unloaders are equipped so the crew can unload the vessel using an onboard boom and conveyor, requiring just one person at the controls and no shore-side equipment or personnel. Unloading can be accomplished in approximately six hours.

There are 63 commercial ports on the Great Lakes–St. Lawrence Seaway system which handle 173 million tons of cargo annually. Destination harbors, boat sizes and legal restrictions greatly affect the pattern of haulage. Mine products make up more than 40 percent of annual cargo, while agricultural products such as wheat, corn, soybeans, barley, oats and flaxseed represent another 40 percent of all trade. More than 10 percent of cargoes consist of fuel oil, petroleum products, chemicals and animal products.

Freighter cargo supplies the steel mills built along the shores of the Great Lakes and connecting channels, including those servicing the auto industry. Other industries supported by ships on the Great Lakes include coal-fired power plants, highway department salt domes and stone docks, where limestone is unloaded for use in construction.

The Great Lakes are home to the United States Flag Fleet and the Canadian Flag Fleet. In addition, the Great Lakes hosts hundreds of foreign-flag vessels, representing over 60 countries, annually. Vessels originating from foreign ports are referred to as “salties,” due to their saltwater origins. Very large salties are unable to pass through the locks of the Saint Lawrence Seaway, but those that do may travel

anywhere in the Great Lakes. Similarly, the largest lakers are confined to the Upper Great Lakes because the seaway locks allow a maximum vessel size of 740 feet in length or 78 feet in breadth.

The inland waterway of the Great Lakes extends from Duluth, Minnesota on Lake Superior to the Gulf of Saint Lawrence on the Atlantic Ocean. It is the world’s longest deep-draft inland waterway, covering a distance of more than 2,340 miles and requiring seven to eight days for a typical freighter to navigate.

Most ships on the Great Lakes are owned by private Canadian or American companies. These ships can be distinguished by their hull colors and smoke stack markings, with more than 150 fleets identifiable by these special markings.

At its stern, each ship flies the flag of the country in which it is registered. The port of registry is also painted on the ship’s stern below its name. Ships often fly the national flag of the host port at the bow. 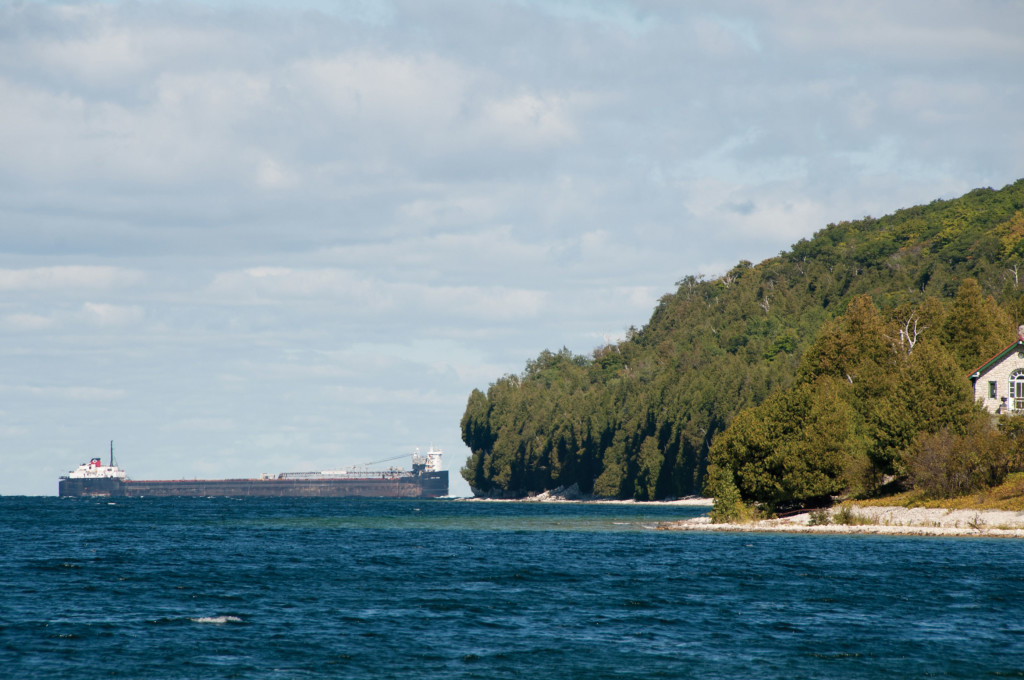 The following websites served as resources for this article, and provide additional information regarding shipping in the Great Lakes and Saint Lawrence Seaway, as well as shipping activity in Sturgeon Bay: