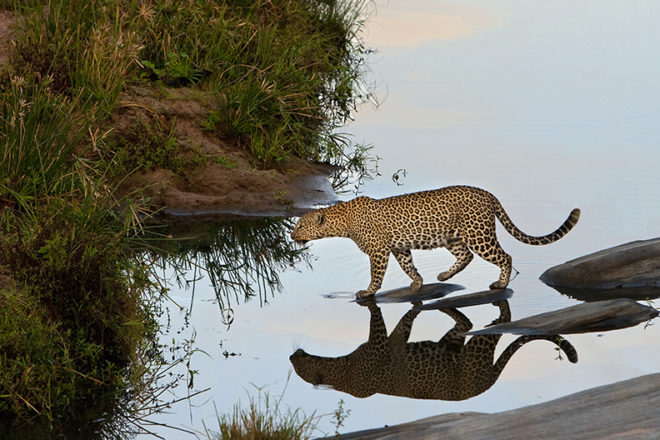 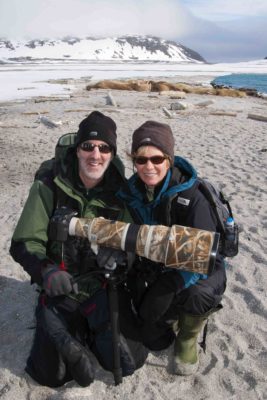 John Van Den Brandt and his wife, Jean, had been stalking a leopard through the thick brush of Kenya at dawn when the scene was set for his most memorable photograph. The couple and their guide had been following the notoriously reclusive animal through thick brush, catching only small glimpses here and there, when Van Den Brandt decided to “go for broke” and assume the big cat’s final destination – a river not far ahead.

The result, “The Crossing,” remains Van Den Brandt’s favorite shot of his career.

“It was just such an ideal scene with that glass water that was reflecting the whole sky and the clouds were visible like a mirror on the surface and to have that animal suddenly appear almost as if in your dreams and cross right where I hoped it would was just one of those moments that comes along maybe once in a career.”

Alyssa Skiba (AS): What is the most important part of wildlife photography?

John Van Den Brandt (JVDB): Research is a key component and probably an unglamorous aspect of wildlife photography. You need to really know your subject very well – its habitat, its habits, what it eats, the kind of animals it preys on, how it moves around seasonally, all those kinds of things because your ultimate goal is to get in front of wildlife so you can actually do the photography part as quickly and as often as possible. Obviously in this business you spend 99 percent of your time looking for wildlife and about one percent shooting it so you want to increase that time in front of wildlife. Research does that. Talking to people, both local people and experts, does that so there’s a lot of preparation that goes into actually being in the field and then of course once you are in the field, it involves long hours of just often waiting and not seeing anything but then there’s those heart-pounding moments that you’re in front of your subject and that makes up for all the waiting.

AS: Where is your favorite place to photograph?

JVDB: Africa, simply because of the quantity and quality of wildlife. Africa’s an amazing place where around every turn there’s just prolific wildlife and you never know what it might be. It might be an entire herd of elephants or it might be 500 zebras scattering in front of your Land Rover. It’s a phenomenal place.

AS: What is the scariest situation you have been in?

JVDB: We were in Alaska and we were about 100 miles from the closest road, a fly-in shoot looking for Grizzly Bears and we were sitting on the edge of a little river taking a break and suddenly out of nowhere a mother Grizzly and two cubs appeared and they were so close that all we could do was just freeze and stay right where we were. They passed us so close that I could hear the flies buzzing around their heads and I could hear their claws scratching on the rocks. I was very nervous that the cubs might come over to explore us, which would have made the mother react and protect them. It could have been a bad situation but they just walked right by. It was definitely a heart-pounding moment. 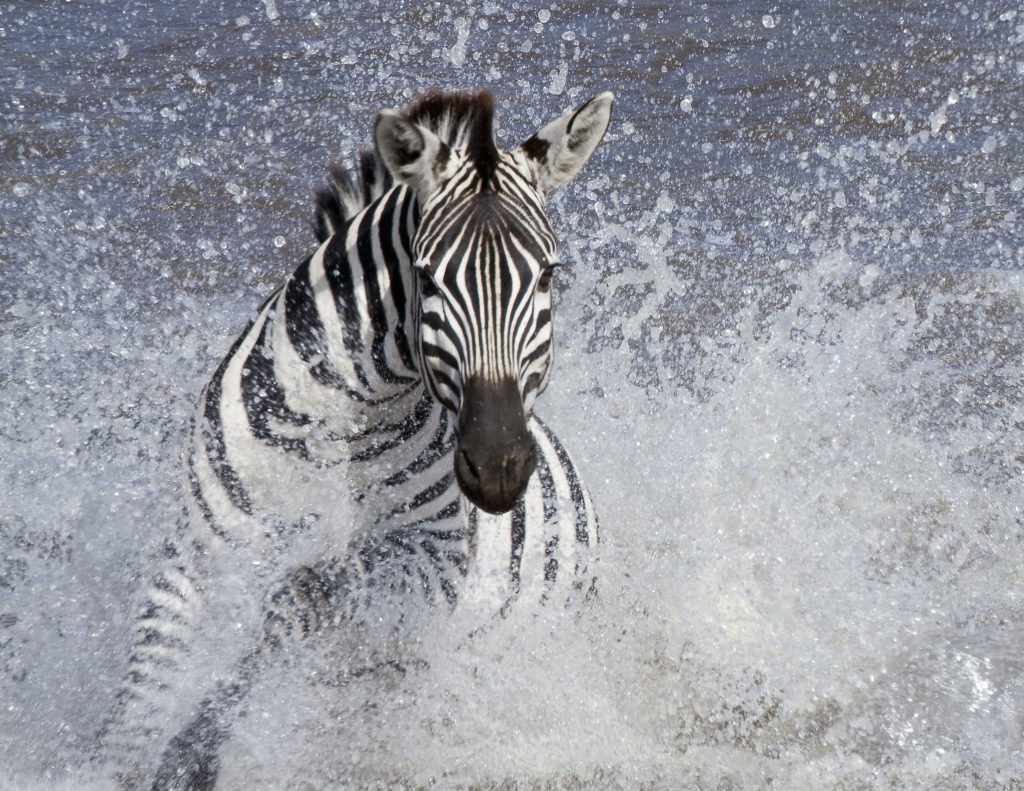 A zebra explodes through the Mara River in Kenya. The Mara contains some of the world’s largest crocodiles, and the zebras know that unless they are sure-footed and fleet, they will fall prey to the massive jaws that lurk below the surface. This day, the crocs were caught unaware and the zebra emerged on the river bank unscathed. Photo by John Van Den Brandt.

AS: How difficult is it to market yourself as a wildlife photographer?

JVDB: It is difficult and I think it’s getting more so all the time. Because of the explosion of available images due to digital photography, everyone takes pictures all the time now and most people are willing to turn their images over in exchange for just seeing them in print and really for no cost. Often now companies will turn their need for an image into sort of a contest and they’ll be flooded with people submitting images at no charge but there is still definitely a market. You do have to actively work toward it.

AS: Are there any false ideas about wildlife photography that you would like to address?

JVDB: When you see examples on television and things like that, it makes it seem as though people see these subjects almost immediately on getting into the field. The opposite is true. It often requires a lot of waiting for something to happen, a lot of patience, a lot of setup and of course you don’t see that on television specials or things like that. Sometimes those people will spend a year in the field putting together a special on a particular animal or things like that. I don’t think people really realize that. The real way to see if you have the personality to be a wildlife photographer is to set up a blind and be determined to spend three or four hours sitting in it just motionless and if you’re content that that’s still going to be a good morning even if you saw absolutely nothing then I think that’s a good basis to consider getting into wildlife photography.