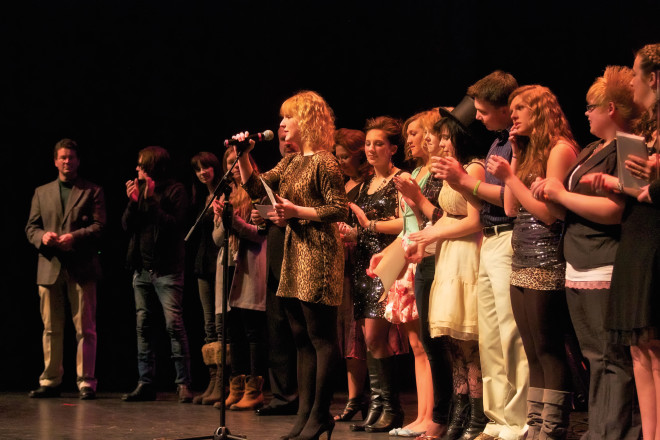 Contests like Door County Idol are often made out to be a stop-at-nothing race to the top. Mock documentaries about such competitions, like Drop Dead Gorgeous, make fun of rural towns where mothers and daughters hatch deadly plots to win. And, of course, on the national television show American Idol young people fiercely compete for the title.

Screenwriters would not have found inspiration for their drama-filled flicks or reality television series here in Door County, however, where contestants are more inclined to hugs and joyful tears.

Contest Producer Kristy Nelson said, “They give each other all these compliments:  ‘You are so good. You sound so beautiful.’ All the kids give lots of positive reinforcement to one another. The night of the show they are hugging, crying – just in love with each other. It’s magical.”

Nelson started Door County Idol in 2003 to coincide with the Winter Festival in Fish Creek. Now in its eighth year, Door County Idol has become a much-anticipated event and a sold-out show.

The performance, which takes place every February at the Door Community Auditorium (DCA), features students from all over the county:  Southern Door, Sturgeon Bay, Sevastopol, Gibraltar and Washington Island. Though they hail from different ends of the peninsula, they all have genuine enthusiasm for each other’s talent.

“Every year that I’ve been involved kids have been very supportive of one another,” said 2010 Talent Development Producer Holly Feldman. “I never caught wind of anything but joyful and supportive competition. I think they really became more of an ensemble by the end.”

It all starts with an audition. There are incentives to entering the contest, such as exposure and prize money, but most kids are inspired to enter by their love of performance.

Nelson said, “We ask them point blank:  ‘Why do you want to be in Door County Idol?’ Number one answer:  they love to sing and perform.”

“I think that our community is very generous in providing opportunities for our youth to have a microphone, lighting, a stage and support to go out there,” Feldman said. “Not a lot of communities have that. Venues like the DCA and [Third Avenue Playhouse]…there’s so many opportunities to be on stage and have an audience.”

Most of the kids who turn out for auditions have a long list of previous performance experience in school choirs, plays and community theater. Each year around 20 kids audition for Door County Idol, of which six to eight are chosen to compete. Nelson recruits three arts professionals from around the Door Peninsula – directors, performers, musicians and radio personalities – to judge the competition.

After auditions, choosing which two songs to sing provides the next, and perhaps the biggest, challenge. They need to choose songs that contrast one another, while equally complementing their voice and personality.

Zephyr Ciesar, Gibraltar senior and 2010 Door County Idol, said, “Choosing the song was one of the biggest challenges. I changed my second song two weeks before the competition because I felt like it didn’t show the audience who I was as much as it should. I changed it to ‘At Last’ by Etta James, which was the best decision I could have made. It showed more emotion and was more real – a better fit for my voice.”

Trevor Hietpas, a Sevastopol senior and contestant in 2010, said, “Mostly we practiced and learned our songs by ourselves. Rehearsals were an idea bouncing session, and often a seasoned performer would give you tips. I learned how to put more personality into the role so that the audience really gets a picture of you.”

Hietpas accompanied himself on guitar during his first song, Green Day’s “Good Riddance,” and again on piano during his second song, “Superman” by Five for Fighting.

“The biggest challenge is finding out how to take a song that’s performed perfectly by the original artist and perform it really well as yourself,” Hietpas said.

While most of the contestants have a lot of talent from the get-go, by going through the rehearsal process they learn the day-to-day work of a performer. By staying on task learning the lyrics and choreography, they have that much more confidence on the performance night.

Nelson said, “With the rehearsals and performance, the kids gain a lot of stage time. They get coaching from professionals, people with many years of experience in the field. They build relationships with each other and make contacts. They have someone to reach out to and ask questions in the future.”

Alan Kopischke, Development Director for the Peninsula Players Theatre, has participated in Door County Idol from many different angles:  audience member, talent coach, judge, and in 2011 as a contestant’s dad.

“You want to make sure you’re giving the contestants helpful comments – acknowledging how they’re succeeding and also giving them some things to focus on as they continue performing,” he said. “Now, they’re teens, many of them performing in front of an audience for the first time. You don’t want to go all Simon Cowell on them. But you want to give them something helpful and give the audience something helpful, too. You’re also there for the audience, trying to give them a context for these performances they’re enjoying.”

When that blustery night in February rolls around, the contestants pocket their stage fright and self doubt in exchange for excitement and positive energy.

“I tell them all that my heart beats outside of my body during the performance,” Feldman said. “Watching them and being so proud when they all do a great job. People who go to it always tell me afterward that they can’t believe how professional it was.”

Winning or losing plays a secondary role to the experience of Door County Idol, where each contestant gains confidence and grows as a performer. Each person leaves having entertained the 750 people in the seats of the auditorium.

Ciesar said, “I learned that if you really have a goal and put focus and determination into achieving it you can do anything. I feel like everyone’s confidence was lifted. Just to be up there on stage and have everyone cheering for you and really giving it your all was a great experience for everybody.”

In the last couple of years the Door County Idol contestants have joined together to perform one song as an ensemble. In keeping with the real-life affection the 2010 contestants had for one another, they sang Ingrid Michaelson’s, “Everybody.”

“Idol gives kids an opportunity to put themselves out there and have an immense amount of community support. It’s ok to forget words…they get the chance to fail and have a safety net. In the adult world you don’t really have that,” Feldman said.

“It gave me more of a picture of how being a professional performer would be,” Hietpas said. Perhaps a more realistic picture than seen on TV or on the big screen.