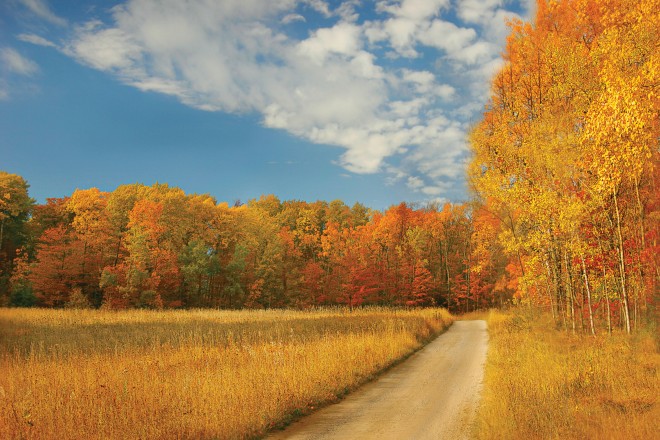 Door County has been blessed with natural beauty far beyond that of most places. Although this is plain to see on any given day in any given month, it is most evident at particular times, like on a perfect day in May when the world is new and the woods and meadows are alive with songbirds, flowers and fresh green leaves. Or on a December morning, after winter’s first snow when a landscape that was, just yesterday, dominated by browns, grays and dark greens is transformed to bright, sparkling white.

Fall color season – late September through October in Door County – is another one of those magical times. By virtue of a landscape filled with deciduous trees and shrubs that have leaves capable of turning bright colors, combined with geography that provides just the right mix of latitude, weather and climate, Door County, along with the rest of the northern half of Wisconsin, can count itself as one of the prime spots in the entire country for fall color.

Leaves change color in fall because of changes in three pigments: chlorophyll, carotene and anthocyanin. It starts with chlorophyll, the pigment that gives leaves their green color. Chlorophyll harvests the red and blue part of the light spectrum so what we see appears green. Then, in the presence of this collected light energy, carbon dioxide from the atmosphere and water from the soil combine to manufacture carbohydrates (sugars and starches) for growth and storage. This process, called photosynthesis, or “building with light,” gives rise directly or indirectly to almost all life on Earth. Pretty impressive! But there’s more. Photosynthesis produces a byproduct by the name of oxygen, an element that in its own way supports most life on Earth. Not a bad day’s work for a pigment.

Ironically, chlorophyll is broken down by the very thing it exists to harvest: sunlight. Leaves have to continue making chlorophyll throughout the growing season. However, production slows in fall, as the days shorten and light intensity diminishes. In addition, chlorophyll is unstable in cooler temperatures. This results in the green color of leaves slowly fading as fall progresses. Now it’s time for the other pigments to show themselves.

Carotene pigments are responsible for the yellows and oranges found in nature – the yellow of marigold flowers, summer squash and fall aspen leaves and the orange of carrots, pumpkins and fall sugar maple leaves. Carotene is also involved in photosynthesis – it absorbs light energy and transfers it to the chlorophyll. Although carotene is present in leaves throughout the growing season, it is masked over by chlorophyll. However, carotene is stable in cool weather, so as chlorophyll breaks down in fall the yellows and oranges of the carotene pigments begin to appear. During fall in Door County, the yellow carotenes show off most beautifully on quaking aspen, bigtooth aspen, paper birch and tamarack (Wisconsin’s only deciduous conifer). The orange carotenes are most famous for the color they impart on our state tree – the sugar maple.

The third pigment, anthocyanin, gives us nature’s reds and purples – the red of apples, holly berries, tomatoes, poinsettia bracts and fall sumac leaves, and the purple of grapes, plums and eggplant. Unlike chlorophyll and carotene, which are attached to cell membranes, anthocyanin is dissolved in the cell liquid. It forms through a reaction between certain cell proteins and the sugars being produced by photosynthesis. The pH of the cell liquid determines whether the anthocyanin shows as red or purple. If the cell liquid is acidic (low pH), red color results. If it’s alkaline (high pH), purple results.

Unlike carotenes, which are present in leaves for the entire growing season, anthocyanins form primarily in fall, triggered by shorter days and cooler temperatures. A thin layer of cells, called the abscission layer, located at the base of the leaf stem (called the petiole) is at the center of this process. The cells in the abscission layer form a corky membrane that first slows and then finally stops the flow of water and nutrients into the leaf. This puts an end to chlorophyll production and the green begins to fade. The yellows and oranges (remember that the carotene pigments have been there all along but have been masked by the chlorophyll) begin to show. At the same time, the last of the sugars made by the chlorophyll cannot move out of the leaf because of the corky membrane in the abscission layer. These sugars stay in the leaf, and in certain kinds of trees and shrubs combine with proteins to form anthocyanin pigments. So the reds and purples are the last colors to form but are really worth waiting for.

Red oak and staghorn sumac are the most common plants displaying bright red fall color in Door County. On the Lake Michigan side of the county, there are occasional pockets of red maple that can also turn bright red. (This is the tree, not its cousin the sugar maple, that covers northern Wisconsin in red during fall.) Maroon red is common on Door County’s several species of native dogwood, including roundleaf dogwood, red-osier dogwood and pagoda dogwood. Purple fall color in Door County is dominated by our most common species of ash tree, white ash.

Brown is not usually thought of as a fall color, but it bears mentioning in Door County because one of our most common trees takes brown to a new level. American beech grows throughout much of Door County. Beech leaves turn a shiny russet-brown in fall, often with patches of yellow, that beautifully complements the brighter colors of its neighbors. The brown comes from tannins, waste products that accumulate in leaves in fall. And, as if to do all that it can to make up for lack of brightness with length of show, American beech, through a process called marcescence, holds many of its brown, withered leaves over winter. This adds much to the quality of Door County’s winter landscape.

The question “Where is the best place to see fall color in Door County?” has a quick and easy answer: just about anywhere you look. Every fencerow, woodlot edge, shoreline and overgrown field will have wonderful color. And during those years when September and October are dominated by sunny, warm days and cool nights, and especially if there hasn’t been much rain from late August on, the color will be outstanding.

Certainly all five of Door County’s state parks, along with its county and town parks, are great places for enjoying fall color. One of the most spectacular locations from which to view fall color is on the western edge of the peninsula, on the northeast side of one of the several tall headlands that jut out into Green Bay. Looking back toward the mainland over calm water reflecting the shore in the early evening of a clear blue day, the fall color along the shore is nothing short of amazing and not soon forgotten. It’s pure magic.