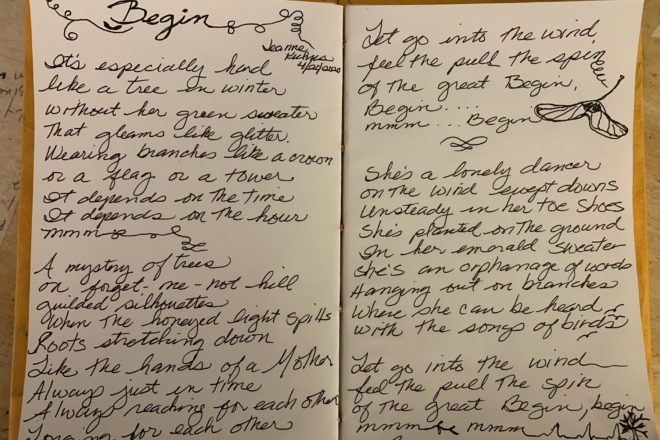 Every song has multiple meanings: one for the songwriter and another for every listener who hears it. And sometimes those meanings are completely different.

This is something local folk musician and artist Jeanne Kuhns learned in high school when a teacher asked the class what Paul McCartney’s song “Yesterday” was about. Every student had ideas about what McCartney’s lyrics meant, but the teacher replied that none of it matters. He said that the first time you listen to a song, it becomes yours and takes on a meaning of your own.

That’s a message that Kuhns has carried into her own music throughout her career, and one that’s been reinforced in a songwriting course she took that assisted her in creating one of her latest tracks, “Begin.”

“The trick is to make your song available to other people in a way that they can translate it into something that reaches their heart,” Kuhns said.

Still, it’s easy to wonder what a song really means to its writer, and here Kuhns takes a deep dive into the writing process behind “Begin.”

Following the death of her mother two years ago, Kuhns has found herself struggling with songwriting. She’s written one or two songs, but she said it’s been difficult. At the time of our phone call, she was also transitioning back to being a solo artist after her band, Small Forest, decided to disband. Plus, we were in the middle of a quarantine, and all of her gigs had been canceled.

Despite these challenges, she felt it was time to work on a new album. To pull herself out of her dry spell, she started taking an online songwriting class from her friend Sue Demel, who teaches at the Old Town School of Folk Music in Chicago.

Demel instructed Kuhns to find inspiration in a collection of three paintings of her choosing — ones that were not her own works. Kuhns chose one of a fairytale tree man reaching out his branches to a woman, a red horse standing on its hind legs playing a violin, and forget-me-not flowers in Peninsula State Park. These lyrics resulted from the inspiration she took from the paintings:

Let go into the wind
Feel the pull, the spin
Of the great Begin,
Begin
Mmmm
Begin

Let go into the wind
Feel the pull, the spin
Of the great Begin,
Begin
Mmmm
Begin

Kuhns said the paintings she chose called to mind an image of a lonely tree out in the middle of nowhere.

“First of all, there’s a sense of isolation and loneliness, which, of course, I am actually feeling now because I live by myself,” Kuhns said, “and I don’t get to see my kids or my granddaughter except from very far away.”

So initially, she thought the tree represented herself.

The lyrics “It’s especially hard / Like a tree in winter / Without her green sweater / That gleams like glitter” represent the tree not having her leaves. The word “glitter” reminds Kuhns of her granddaughter and playing dress-up, as children do.

The second verse describes a group of trees, or a “mystery of trees” on “forget-me-not hill” — an image that one of the paintings inspired.

Kuhns imagines this group of trees to be over a hill, where the single tree cannot see the others. She said she pictured them looking golden, as if the sun were shining through them, which produced the lines, “Gilded silhouettes / When the honeyed light spills.”

The trees within the group have the advantage of being able to communicate with and nurture each other, whereas the lonely tree does not, which led to the lines that finish off the second verse.

Writing a chorus is sometimes hard, Kuhns said. You have to use the right number of words to give it a nice flow and make it catchy. The chorus she chose is about how the single tree can get in touch with the group of trees.

“The roots aren’t going to reach, so what can she let loose of? Her seeds?” Kuhns said. “I was thinking of those whirligig things from maple trees that spin down like helicopters. They go on into the wind and in that way, she’s throwing herself into the wind: ‘Feel the pull, the spin / Of the great Begin.’ She’s beginning a new life. Hopefully her seeds will go to the other forest.”

The painting of the horse on its hind legs inspired the lines that start the third verse: “She’s a lonely dancer / On the windswept downs / Unsteady in her toe shoes / She’s planted on the ground.” It reminded Kuhns of a dancer wearing toe shoes, but also how that image parallels balancing life by yourself.

In this verse, the tree is back in her emerald sweater, meaning that she has all of her leaves again.

Yet the tree is “an orphanage of words / Hanging out on branches / Where she can be heard / With the songs of birds.” Kuhns said the tree is unable to communicate using roots or words, so she finds another way to speak: with her branches.

“My granddaughter is autistic, so she doesn’t talk much. It’s taken a long time for her to speak,” Kuhns said. “The ‘orphanage of words’ was kind of thinking about my granddaughter and this lonesome tree and the fact that they can’t communicate like most people do. So they have to find alternative ways to communicate.”

Though the song has a personal meaning to Kuhns, she said she aimed to create a tune that would evoke images for listeners.

“It doesn’t have to mean [to another person] what it means to me,” she said.

Kuhns premiered “Begin” during a Facebook Live concert series that she started during the quarantine called Singing for My Supper, and she’ll continue practicing and writing before she records this song and others early next year.