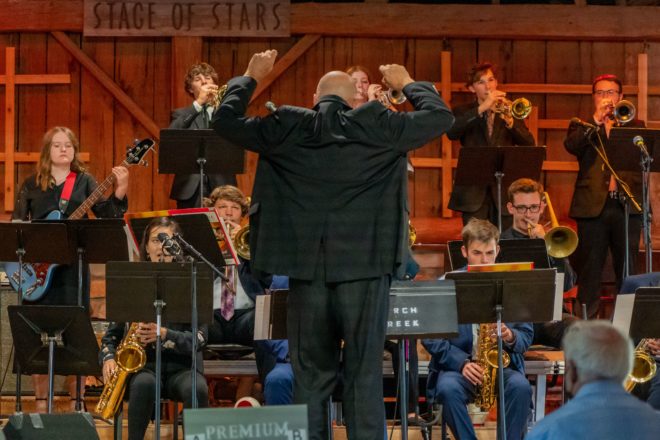 A Place for Musical Immersion

The first time a particular world-traveled musician played at Birch Creek, he was surprised, according to Jeff Campbell, who’s a Birch Creek bass instructor, program director and academy jazz orchestra director. Campbell said the musician – a friend of his who now works at Birch Creek – looked at him with a funny face after they’d finished playing.

“He told me that in his experience, there have been only two places he’s played where the room affects the sound,” Campbell said. “That’s the Village Vanguard in New York City, which is a famous jazz club, and the Birch Creek Barn.”

That’s notable praise for the Birch Creek Music Performance Center’s concert venue and, by extension, its Summer Music Academy, which James and Frances Dutton founded nearly 50 years ago. During that time, it has stayed true to its goal of connecting young musicians with professionals.

Campbell started at Birch Creek as a bass instructor when he was a college student in Utah. Today he spends most of the year as the jazz chair at the Eastman School of Music in Rochester, New York, but he reserves his summers for Birch Creek. This year marks his 34th year with the program.

“The students are completely immersed in the culture of making and preparing music for audiences,” Campbell said. “That’s the genius of [Birch Creek’s] structure.”

The academy initially ran out of the Duttons’ home, but it now resides across the street in a nine-building complex that includes housing, a cafeteria, practice areas and its concert venue. The summer academy runs in two-week sessions: one for percussion and steel band, one for symphony and two for jazz.

Each session has a maximum number of 56 students. For the jazz sessions, that means up to 12 saxophonists, 10 trumpeters, 10 trombonists and six guitarists, six bassists, six pianists and six drummers. There are exceptions, however, such as this year’s vocalist and mallet player, who plays instruments such as the xylophone and marimba. The number of students per instrument can shift a little as well, and sometimes they’ve had to get creative: One year there was only one saxophone player.

The students and instructors work together to learn and perform, which is a favorite feature of Dario Santoy, a rising senior and baritone saxophone player.

“The best thing about camp is definitely all of the peers who are also as interested in jazz as you are,” he said. “It’s a lot of – how do I say this? – exposure to different people who are also very into jazz. That’s one thing that I value a lot.”

The application form that students submit, Campbell said, asks about their favorite jazz musicians and pieces to gauge their familiarity with the genre. It’s not a make-or-break factor, he said, but it helps with making any tight decisions because the academy does not require students to submit recordings.

Because of how much performing is involved in the academy, it gives students a way to figure out whether they may want to perform professionally in the future. Even when students decide that such a career choice or lifestyle really isn’t for them, Campbell said, the academy has succeeded in helping them make that decision.

With a few exceptions, the students are high schoolers who are old enough to be familiar with their instruments, and capable of learning and performing 20-30 pieces in two weeks.

The students get the music for the first time on the Monday after they arrive and give their first show (of eight) that Wednesday night. On top of that, the students also work in small groups that perform preshow music in the gazebo outside the concert barn. It’s two weeks of near-constant playing.

Bassist Sommer Knoener, a rising senior, showed off the calluses and swollen left pinky she’d developed in a week and a half. And yet, both she and Santoy said they’d be back next year if they can. Knoener, who has been playing jazz for four years, doesn’t even mind the minor damage to her hands.

“I feel like Birch Creek is a place where you really get into knowing people in music,” she said.

“I always tell people when they come to Birch Creek, it changes their life,” Campbell said. “The barn has a little mojo, a little spirit about. It has something magical.”

Find out more about the Summer Music Academy and get information about purchasing tickets for Birch Creek’s performances during the summer and throughout the year at birchcreek.org.