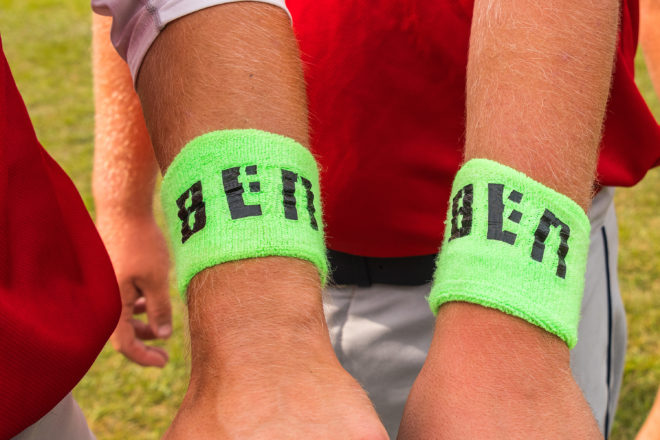 Thirty days after the biggest fan of the Egg Harbor Indians died unexpectedly due to complications from the muscular dystrophy he was diagnosed with in the 1st grade – 23-year-old Ben Junion – Jennifer Kacmarynski was wearing the war bonnet Ben wore to every Egg Harbor Indians game as she attempted to enthuse the crowd and cheer on the team during its successful Aug. 19 regular season championship showdown with the Sister Bay Bays.

Describing herself as “just a mom and a teacher whose brother [Greg Kurtz] used to play for the Indians,” Kacmarynski, a 4-K teacher at St. John Bosco Catholic School in Sturgeon Bay, was also wearing a blue mesh tutu with the colorful Indian headdress.

“Ben wore this to every game,” she said of the war bonnet. “I thought I would wear it today for Ben. We love him. We’re fired up for him. It’s all the community coming together to support Ben. This is generation after generation coming out every Sunday to support your team. Ben would go to all the practices. He never missed out on anything. He wasn’t sick. He just died on a Friday in July. It was hard on everybody. I felt like ever since Ben passed, the ball’s bounced a little our way. It’s been inspiring.” 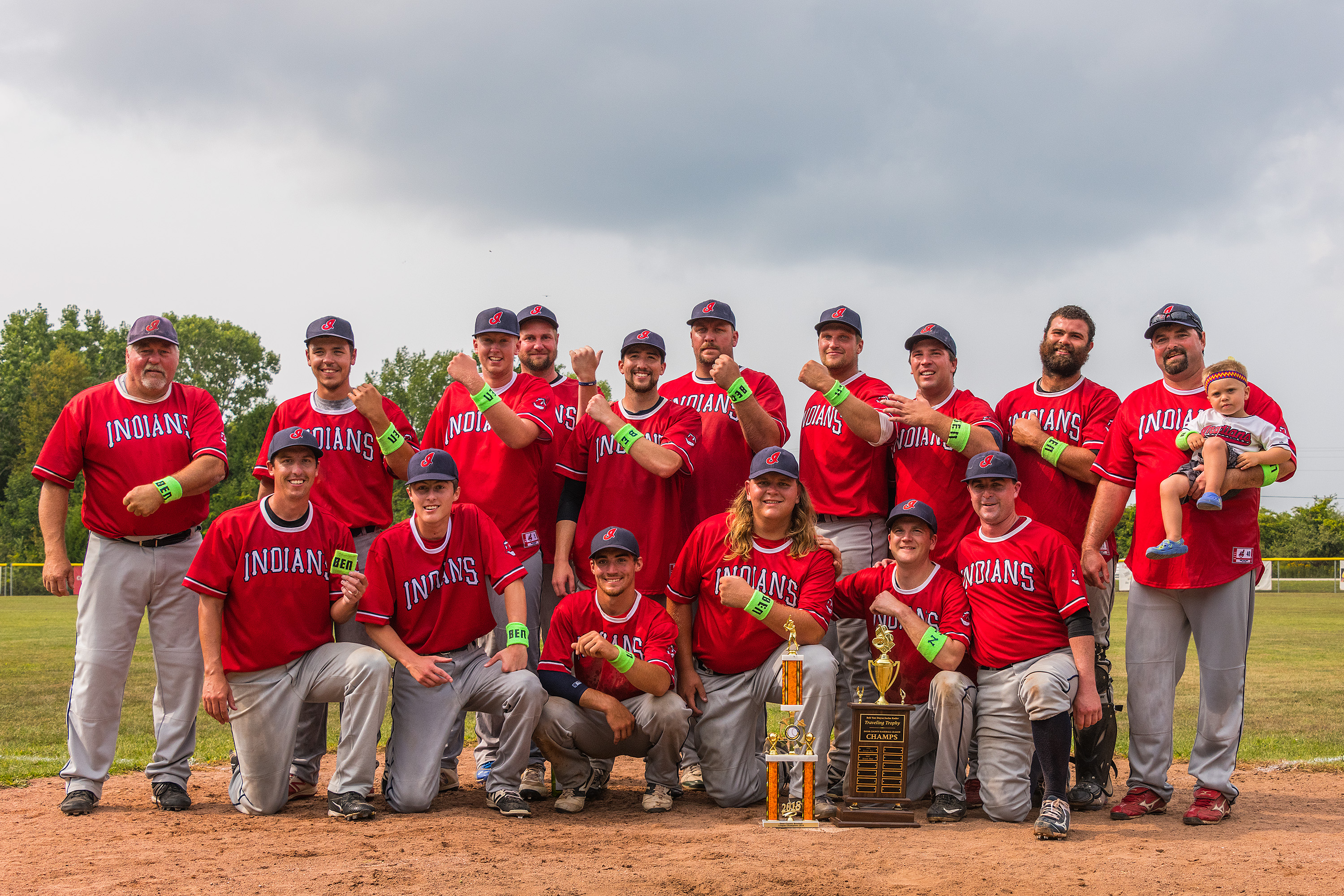 In addition to being the Indians’ biggest fan, Ben was the younger brother of team manager Jake Junion. The entire team wore green arm bands with Ben’s name on them in the exciting 2-1 win against the Sister Bay team, which was hoping for its fifth consecutive regular season league championship.

The championship tiebreaker game was the result of the Aug. 12 game in Sister Bay, where the Bays hoped to clinch the title to become the first league team to win five in a row. But the Indians won that game 8-2, giving each team 11-3 seasons and forcing the tiebreaker. 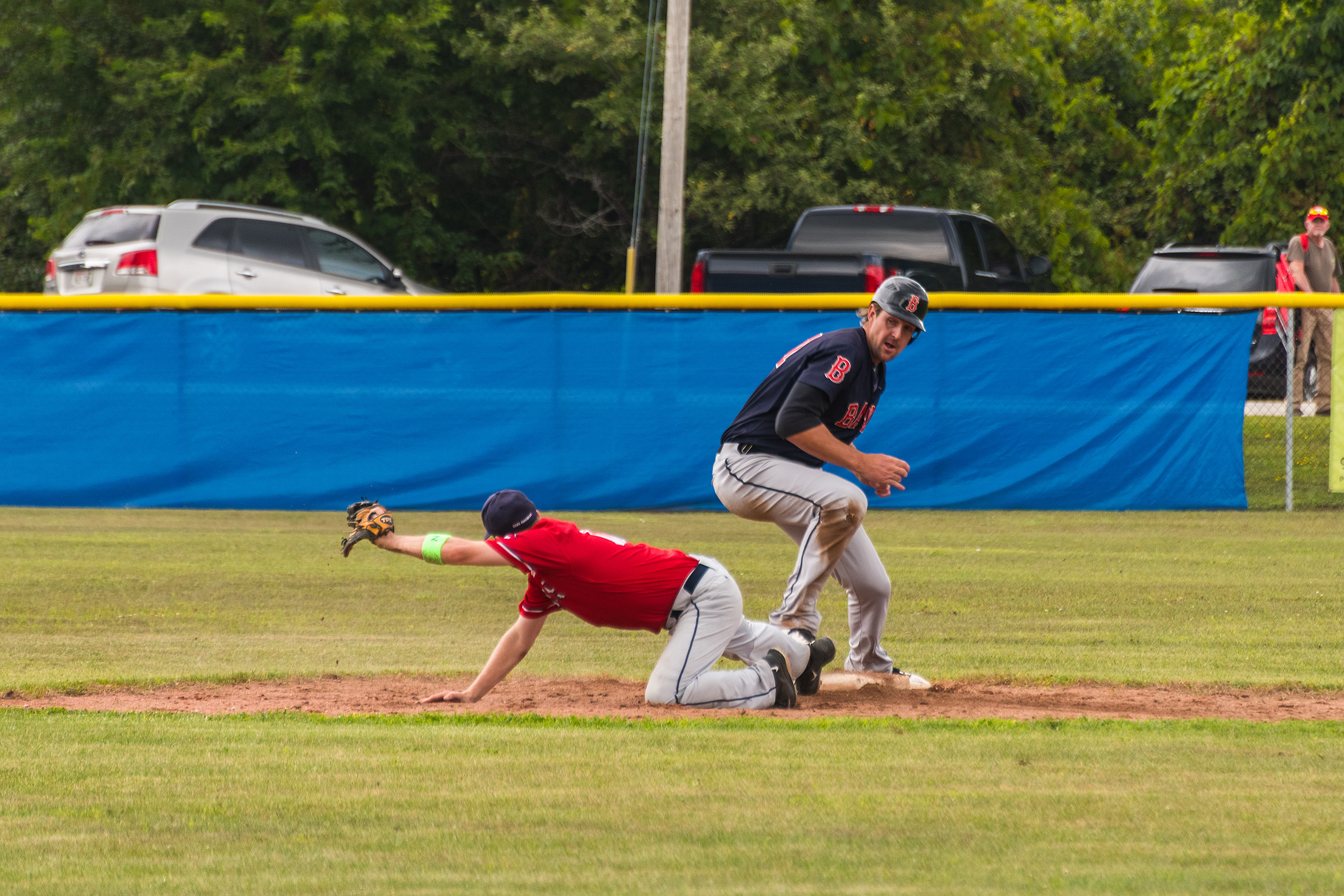 “It was a good season and a good team win. We had a lot of fun and I was proud of the guys,” said Jake Junion, in his third season as manager. “We just had a never-say-die attitude and played good ball the last half of the year.”

Junion also gave a shout out to former league batting champ Riley Spetz, who lives in Alaska but was home to play some mid-season games with the Indians.

“Riley coming home was a big help and gave us a boost and it just kind of rolled from there,” he said.

The game was something of a pitcher’s duel, with Indians pitcher Al Byrne throwing a two-hitter. His Sister Bay counterpart, Chase Lindem, threw a three-hitter.

Ticket takers at the start of the game said this was the largest crowd they had seen at a match.