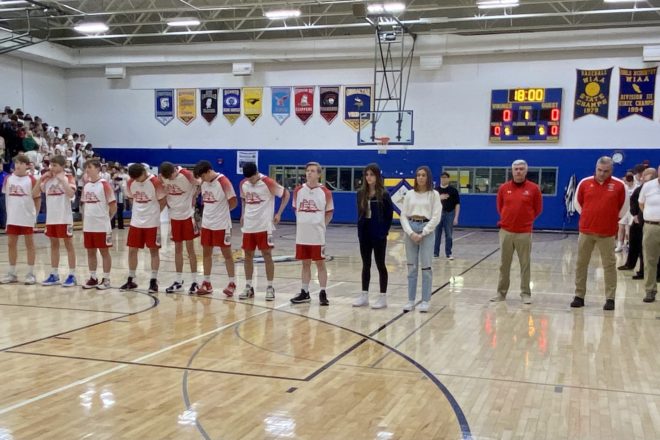 Players observe a moment of silence to remember longtime Sturgeon Bay basketball coach Jim Benesh Monday before the Clippers played the Vikings at Gibraltar. Benesh died Saturday after a battle with cancer. Photo by Deanna Reinhardt.

Lindenberg is just the second player in Gibraltar boys history to surpass 1,000 points, doing so in 65 career games. The only other member of the club is the legendary Dave Voskuil, who lit up the nets for 1,464 points and 24.4 points per game in just three seasons from 1967-1970. Those 1,464 points stood as the county record for 30 years until it was broken by Nathan Vogel of Southern Door in 1999.

Lindenberg averaged 10 points per game as a sophomore, then missed several weeks of a junior season that was condensed due to COVID precautions. He has scored 481 points so far this season.

But Monday was a somber occasion as well, as the Clippers played their first game since the death of longtime coach Jim Benesh, who died of complications from multiple myeloma, a blood cancer, on Saturday. A moment of silence was held before the game in his memory, and a bouquet of flowers sat on an empty chair at the end of the Clippers’ bench. At halftime, Gibraltar held a miracle minute to raise more than $900 for the Benesh family.

Benesh won more than 400 games during his 28 seasons and earned induction into the Wisconsin Basketball Coaches Association Hall of Fame – an honor he was informed of in January. Benesh taught at Sturgeon Bay for 32 years and also coached girls basketball and softball. A public visitation will be held at the Sturgeon Bay High School gymnasium on Sunday, Feb. 27, 2-8 pm.