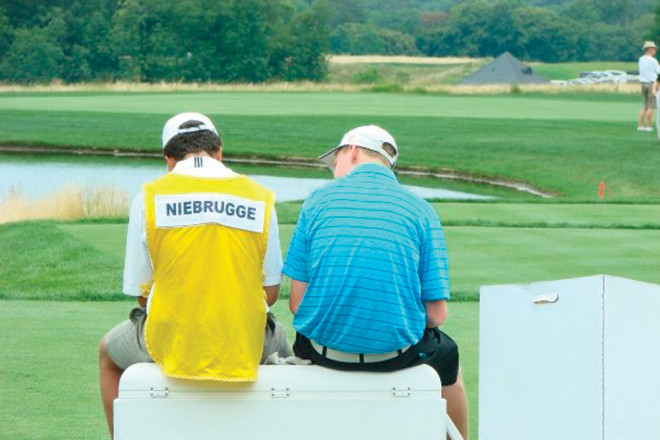 As difficult as the game of golf may seem, the Tiger Woods, Arnold Palmers and your local club champion can generally set up the foundation of a golf victory. After all, they are the ones making the swings, taking the strokes and holing the putts — making it seem effortless every step of the way.

But alongside every great golfer there is a caddy, the loyal servant tagging along through the shanks and the chip-ins. For how easy the golfers make things look, the lack of attention given to the golf caddy demonstrates just how easy they make their job look. But there is, in fact, much more than catches the eye, and it starts long before the tee box.

Joe Borawski, 22, from Mequon, Wisconsin, has spent seven summers as a caddy at both Ozaukee Country Club in his hometown and Horseshoe Bay Golf Club in Egg Harbor.

“Golf is the greatest game that there is, especially when you have a caddy,” Borawski said. “It’s just the golfer, the caddy, and the course.” 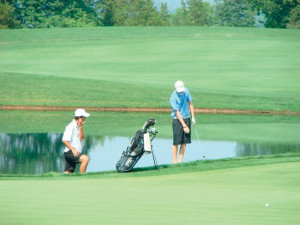 When it comes to wearing a white jumpsuit and tracking golf balls, Borawski is more than a seasoned veteran.

“First thing is, I make sure to have a towel, a green tool and an extra ball marker in case the golfer doesn’t have one,” Borawski said. “Usually I’ll have to make a run to the pro shop to grab a caddy card and make sure I’m waiting for the golfer when they show up.

“You make sure all their clubs are in order, clean and ready to go. Walk over to the first tee with them and have the driver ready.”

Meticulous preparation is a part of the caddy gig that not even his golfer notices. The many tools — ball mark, moist towel, pencil, repair tool, etc. — help caddies on every acre of the golf course. They’ll fix marks on the green and keep blades of grass and specks of sand off the clubs. But however important they all may be, every accessory takes a backseat to a caddy’s most vital feature – their eyes.

“The most important thing is making sure your golfer never loses a golf ball. Obviously, you can only do that to a certain degree. If they shank it into the woods, you’re kind of screwed,” Borawski said. “In a big tournament, you can’t be throwing away strokes on balls that should be found but just can’t be found. That’s the biggest thing.”

Through high school golf, Borawski developed a relationship with Jordan Niebrugge, a golfer three years his junior. It just so happened that Niebrugge was one of the best young golfers in the nation and Borawski was more than satisfactory as a friend, caddy and golf mind to carry Niebrugge’s bag at the U.S. Junior Amateur tournaments in 2009 and 2011.

Although he never won the national tournament, Niebrugge – now on scholarship at Oklahoma State – called Borawski a perfect caddy because his temperament kept Niebrugge focused when his putts weren’t rolling just right.

Now that he is playing collegiately, most tournaments don’t allow Niebrugge to take a caddy. Furthermore, Borawski is nearly 1,000 miles away.

When a particular golf game or event doesn’t allow for “goofing around,” the relationship established between golfer and caddy remains important. Tom Mitchell knows about moments like that.

Mitchell, the former fitness director at Cherokee Country Club in Madison, Wisconsin, had caddied just once in his life when a rare opportunity came his way.

A stipulation for accepting the fitness director position back in 2001 was that Mitchell must become the personal trainer for Steve Stricker, an aspiring PGA professional at the time. Stricker was ready to compete in the 64-player Accenture Match Play championship in Victoria, Australia, but he was lacking one piece of the puzzle – a caddy willing to fly across the world to carry his golf bag. 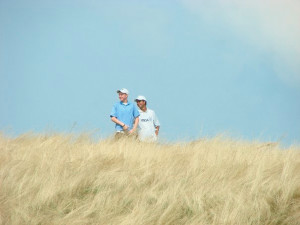 Mitchell jumped at the opportunity and didn’t regret it. His lack of caddy experience never became an issue – Stricker won the event, pocketing the $1 million prize. Mitchell had just recently accepted the fitness director job and through another weekend, he quickly added a new one.

From 2003 to 2008, Mitchell caddied for Stricker, one of the top-ranked golfers in the world. To say he faced some pressure along the way would be an understatement.

“There’s a lot of responsibility (in caddying),” Mitchell said. “There’s a lot you’re held accountable for, especially in the heat of the moment when you have to make a decision.”

Mitchell would announce all the necessary information that runs through a golfer’s mind as he approaches each shot — wind direction and strength, yardage, elevation. Stricker would then grab a club, grip it, rip it, and the pair was off for the next meeting with the ball.

Sounds easy enough, but only because Mitchell was a diligent student.

“You have to be very well prepared. You have to do your homework on those practice rounds,” Mitchell recalled. “That moment when they have to pull the club and hit the shot, you’ve got all the information so they feel comfortable with pulling that shot off.”