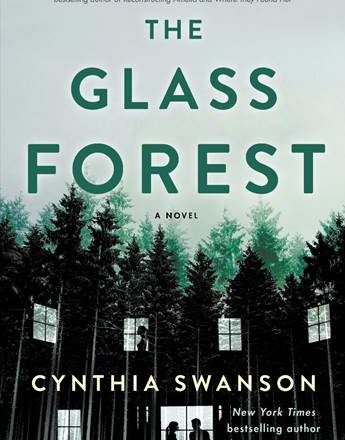 Seamlessly spanning decades from the grave post-World War II years to the tumultuous atmosphere of the 1960s, Swanson slowly unfolds the details of the past with a sinister, noir-ish plot. With its tightly wound, character-driven story, this gripping page-turner will appeal to readers of thoughtful literary suspense and intricate family sagas alike.

Born and educated in Wisconsin, Swanson is the New York Times bestselling author of The Bookseller, an Indie Next selection that’s been optioned by Crystal City Entertainment with Julia Roberts slated to produce and star. Swanson now lives with her family in Denver.

Swanson will hold two upcoming events for The Glass Forest. Swanson will stop by Fair Isle Books & Gifts on July 21, 1:30 pm for a book signing. Fair Isle is located at 1885 Detroit Harbor Road on Washington Island. On July 23 at 4 pm, Write On, Door County and the Friends of Door County Library are sponsoring a talk and book signing with Swanson at Peninsula Bookman, located at 4083 Main Street in Fish Creek.