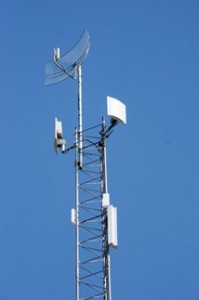 While several companies have come and gone with plans to offer high-speed internet in Door County, one actually does offer fast, industrial-strength, high-capacity broadband.

Andy Munao, an owner at Shipyard Island Marina on Washington Island, uses NEWWIS as the main service for online marine businesses: simyamaha, which employs five people selling Yamaha parts across the country and around the world; veradoclubparts, for Mercury Verado parts; and permatrims for imported hydrofoils from New Zealand.

The marina already had a tower for its marine radio, so NEWWIS installed three antennas on it – one to provide local service and the others to provide service to Gills Rock and Detroit Island – antennas Munao hosts at no charge.

He has high praise for the service he gets from NEWWIS, including upgrades to the equipment which improves his speed.

He recently installed a Frontier data line as a backup, and the marina also uses Verizon. At home he uses Cellcom because he is deep in the woods, and NEWWIS can’t reach him unless he puts up a tower.

NEWWIS, which used to charge $390 for installations, has cut that to $179 for users who have line of sight access to one of its towers. Total monthly fees run $57.97, all taxes included.

When reporting for this story began, NEWWIS had 31 towers. It added two during the last week of August – one in Appleport east of Sister Bay and another site in Gills Rock.

Nate Bell, network administrator at NEWWIS, said people often don’t notice the company’s towers because its equipment is compact. If the tower can reach a home or business through line-of-site, with no obstruction from trees or cliffs, it can deliver 12 to 30 megs of data and in places as high as 100.

County ordinances restrict towers to 75 feet; if NEWWIS were permitted to reach 100 feet, it could increase its coverage in the county substantially, Bell said. Where local governments cooperate, as in Sister Bay which allowed NEWWIS onto its water tower at a reasonable fee, residents can get excellent coverage.

Even by Door County standards, Gordon Lodge in Baileys Harbor is remote. It uses a $600 per month T1 line for data back to the corporate headquarters in Chicago and Dallas and for voice over IP. But it uses NEWWIS for guest internet connections.

“We had everything on the T1 for awhile, but that was slowing down, probably because the guests were checking Facebook and watching YouTube videos,” said Damon Marra, IT manager for GT Packaging, the corporation which owns the lodge.

Bell said he is providing them with 20 megs downloads and 10 megs up.

Damon, who likes redundancy of providers for the business, said, “Wireless offered us better speed.”

“We can blow others out of the water on upload speed,” said Bell.

On Oak Street in Sturgeon Bay only a sign indicates the offices of Bay Lakes Information Systems LLC, a rather innocuous name for a company that provides Lodgical Solution, reservation software for motels and hotels from 3 to 260 rooms. A barely visible antenna on the roof points to a NEWWIS link on a tall tower a couple of miles away on County TT. Greg Swain, the president, has installed another antenna on a tower he has set up at home to catch Green Bay TV signals. The NEWWIS antenna is about the size of a soda can, he said.

With it he has 40 to 60 megs up and down from his home office. That’s useful if he gets an emergency call from a hotel because he can go into its computer system, with permission of course, and download a 40 or 50 meg file in less than a minute to check for problems. And on nice summer days when the kids are home, he can work from home as effectively as he can work in the office.

Although the county is talking about running fiber to Washington Island if or when the underwater electrical cable is replaced, Bell said that isn’t needed.

“Fiber to the island is an absolute waste of money,” Bell said. “I have 60 megs to the island now, and I can upgrade that to 100 megs by changing settings on our equipment. We have nothing close to saturation on the link – maybe 50 to 60 customers.”