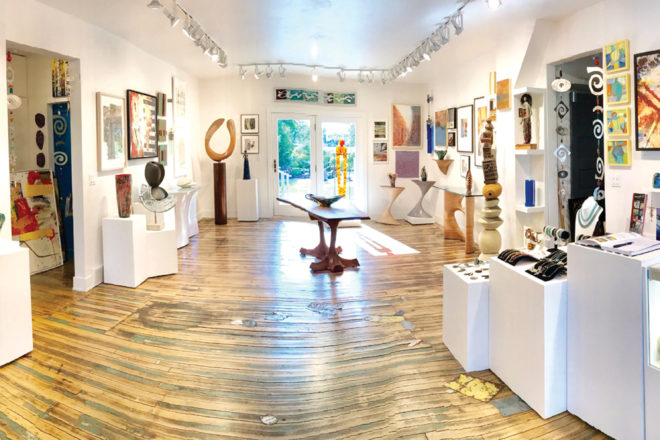 Proprietors of art galleries in Door County report that business during this season of COVID-19 was not as bad as they’d feared, and in some cases, business was even better than last year.

“We started six weeks late – the tail end of June,” said Dan Cross, owner and director of Idea Gallery at the intersection of County T and County V in the middle of the peninsula. July picked up a little, but then August surprised him: Sales were 50 percent higher than last year, and by Sept. 13 of this year, he had surpassed all of his September 2019 sales.

“Customers have been buying bigger work,” Cross said. “They’ve said, ‘Well, we’ve canceled our trip to Europe or canceled that cruise this last spring, and in turn, we’re spending the money on art.”

One result of COVID-19 is that people are spending more time at home, and often in home offices, which has meant putting money into remodeling and redecorating.

“That’s not something you could foresee in your expectations of the season,” Cross said.

His gallery’s location is variously described as West Jacksonport, Baileys Harbor or Egg Harbor. It’s across Plum Bottom Road from Blei’s Tavern (closed for renovations) and the Jacksonport baseball diamond, but there isn’t another gallery or store in sight. Several are within a few miles, though – Martinez Studio, Plum Bottom Gallery and Woodwalk Gallery – and they all show at least some, and often quite a bit, of contemporary and abstract work.

Perhaps ironically, given the gallery’s location, Cross speaks of its visibility. The building has been reclad in shiny, corrugated steel, so it definitely catches the eye of drivers traveling between Egg Harbor and Valmy on their way to Glidden Drive or Sturgeon Bay. But he doesn’t depend on drive-by traffic for his sales.

“Fifteen years ago, I wouldn’t have put a place here – not without GPS on smartphones. GPS and people googling.”

As if to prove his point, Dennis and Madeline Zic of Chicago stopped to pick up three pieces they’d purchased the day before. From their hotel in Ephraim, they had planned to visit an Ephraim gallery that Madeline’s mother likes, but it wasn’t open. So they headed east, checked the Door County arts map and found Idea Gallery.

“The art here we ended up liking the best,” they said. Cross said 35 to 40 percent of his visitors are from Chicago, and many of the rest are from all across the country. His favorite was a New Yorker who told him that Idea Gallery reminded her of her favorite New York gallery.

Down the road, Chad Luberger at Plum Bottom Gallery said the year has been better than expected.

“Buyers want pieces to show on their walls for Zoom calls,” he said – an interesting pandemic outcome – so he’s been busy reminding artists to keep producing. “It is easy to get distracted.”

Down the road and across Highway 42, Jillaine Burton Seefeldt, who manages and co-owns Woodwalk Gallery with her husband, Andrew Seefeldt, has made good use of the web for an online presence. At the beginning of the year, they had something from each of the 80 artists she represents, and now the entire inventory is online. They’ve run the gallery for five and a half years after buying it from Margaret Lockwood and Allin Walker.

“People like to browse,” Seefeldt said. “The website hasn’t resulted in many direct sales, but people get acquainted with the inventory, or they use it to review something they had seen in person.”

The gallery will remain open through the end of November, but only on Saturday and Sunday because, she said, Fridays proved to be a waste of time last year. Woodwalk will sell works through the end of February, then display a juried online show before reopening in May.

Seefeldt said visitors like the variety of media, sizes and prices that the gallery offers.

“Yesterday I sold a gray, black and white abstract that made the customer feel good, and at the end of the day, someone bought a beautiful floral,” she said. She likes art that makes people happy, and clearly, that means different art appeals to different people.

In Sturgeon Bay, Margaret Lockwood is seeing fewer casual visitors to her Lockwood Gallery near the Steel Bridge.

“The people coming in seem to know about me or what they are going to see,” she said. “They are coming in with a purpose. I sold a lot of paintings – I don’t know what the deal is.” Indeed, Lockwood said, inventory is down to a single canvas, but she has another stretched and ready for her attention.

People who come in are usually looking for large works – often 40 by 60 inches – because that’s what Lockwood is known for and likes to paint. And after learning not to anticipate sales based on visitors’ comments, she’s found that discipline slipping a bit.

“After all these years, I don’t count on a thing,” she said – but then corrected herself. “This year I have started getting excited because they are coming back or calling.”

On the other side of 2nd Avenue, glassblower Jeremy Popelka was in an unusually quiet studio at Popelka-Trenchard Fine Art, in the process of replacing a kiln that’s usually running 24 hours a day. He agreed with a comment that Ginnie Cappaert – of Cappaert Contemporary Gallery in Egg Harbor – had made in the spring: that between the pandemic and politics, it can be difficult to summon the artistic energy to create.

“This year, all the things hanging over your head do take a toll,” Popelka said. “In the end, some of our regular clientele showed up like clockwork. We have friendships with a lot of clients, and I think they feel a certain allegiance and want to be sure that we will be OK.”

Sales in 2019 were unusually strong, he said, so although the numbers are off this year, they aren’t way off.

“They definitely are not what we had worried about,” he said.

So Popelka is taking advantage of the slower pace to put in a new furnace that will use less gas. And, because it’s larger, it will allow him to do more of the sculptural work that he enjoys.

“Having a break is sort of a blessing,” he said. “It gave us the chance to catch our breath and think of what is important at this stage in our lives.”