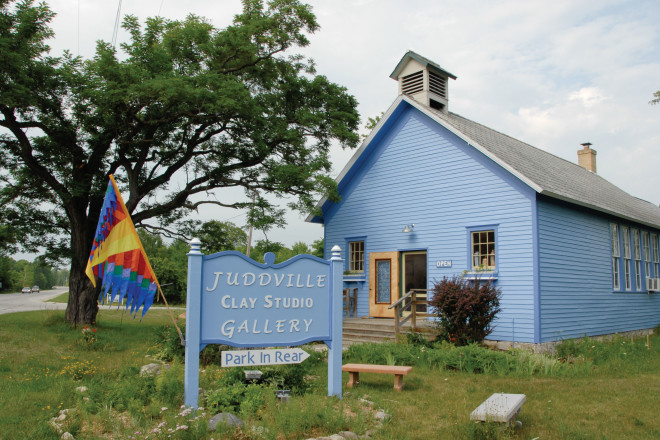 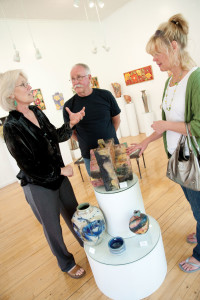 As Tony Staroska and I stand in front of his gallery, Juddville Clay Studio, we are at the main intersection in Juddville known as Juddville Junction. Cars pass by sporadically and when they do, we wave since it’s almost always a local and, therefore, someone we know. This corner of Juddville Road and Highway 42 has seen its fair share of neighbors over the last 130 years or so; in fact, it was the epicenter of rural Juddville life. It’s where farmers gathered, people worshipped at St. Paul’s Lutheran Church and where students learned at the Juddville Rural School.

When Tony and his wife Rebecca Carlton purchased the old Juddville school building five years ago, they were mindful of its past. Knowing the building was a former school (its last session was in 1957) became a strong pull for them, especially since they are both teachers.

According to Rebecca, they were sold on the place when they walked up the path to the front door. The building was already set up to be the perfect gallery space thanks to their predecessors, The Woodwalk Gallery. She was also sold on the county and knew that this is where she wanted to live. Tony introduced Rebecca, a Southwesterner since her childhood, to Door County since he was hoping to move back to the Midwest. 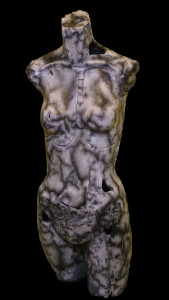 “We consider ourselves temporary custodians of the place,” Tony explains. “All of the gallery spaces I’ve had over the last 40 years have been old buildings.” There was an old blacksmith shop in Eagle River, Wisconsin and, more recently, a 134-year-old Adobe in Tucson where Tony and Rebecca spend their winters and create work for the next season. Tony arrives in April to open the gallery and get ready for the season, and Rebecca arrives mid-May with a trailer hauling a winter’s worth of sculpture and pottery.

Gone now at the Juddville School are the outhouses and the Maypole. In their place are examples of Tony and Rebecca’s varied expressions through clay and tile. The piece that draws a lot of attention, particularly from those who attended the Juddville School, is the tile mural on the side of the building that Rebecca created from an 1880 class picture. Only one student has been identified in the photo due to his distinguishable ears, a well-known family trait. The others to this point haven’t been claimed.

Tony and Rebecca have been artists for nearly a combined 75 years; however, their personal and professional collaboration is somewhat recent. About eight years ago, Rebecca was ordering clay in Arizona and was standing on one side of the counter when she asked a question. Tony was standing on the other side of the counter and said, “I can answer that.” They began a conversation which Rebecca claims hasn’t stopped since. They have been married for six years now.

“We’re not traditional potters,” Tony explains. “We don’t make casseroles or utilitarian pieces. There are a lot of other great potters up here who do, but our work is very different.” People are often surprised when they walk into the gallery. Given the diverse sculptures, urns, vessels and tiles on display, it takes customers a little while to figure out that this is the work of only two people. If they are looking to see a common thread or 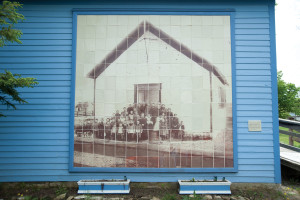 style, it isn’t always there to be seen. That is largely due to Tony, in particular, using many techniques to fire his artwork, such as salt firing, slip resist Raku, reduction firing, Saggar firing, and finally oxidation firing, which he works on with Rebecca.

“I would be bored if I only used one technique,” Tony elaborates. “I’m really not interested in creating something unless there is a high probability of failure. Otherwise, it feels like I haven’t tried.”

Rebecca is inspired by our natural world. “I feel as though many of us have lost touch with the earth; we no longer spend time with the land and water. Our time now is spent in our heads – so much of what we know and how we interact is through technology,” she says. “With my work, I am hoping to beckon the viewer to reclaim some of their memories of smelling a flower, touching the scales of a fish, laying under the canopy of a tree and want to experience more.”

The physicality of the clay is something that appeals to both Tony and Rebecca. “I invite folks to touch my work when they visit us at Juddville Clay,” says Rebecca. 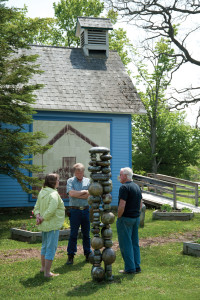 Like most artists, they find it challenging to explain their work. They would rather that the works speak for themselves. “It’s fairly simple,” Tony says. “I just like to make things just to make them. I figure if I like it, someone else might, too.” Tony also finds it challenging to name his artwork once it’s completed.

A lot of their time is spent in the studio. It works out well that Tony is an early bird and Rebecca is a night owl. They can then divide their time between creating and interacting with their customers. In many ways, their customers are students. They come in to look around and end up learning something about how a vase was created or the unpredictability of the salt firing processes. “You don’t realize it, but just looking at a pot makes your life better,” Tony believes. Tony also finds time for maintaining the building, including the addition he built, doubling the size of the space while keeping the integrity of the original historical design.

In addition to the sculptures and works in the gallery and garden, Tony and Rebecca also create special commissioned pieces. Known for her tile work, Rebecca has received commissions from all over the country. One of her favorite murals is in Nebraska and is 9 feet by 6.5 feet.

“I love creating work that is site specific, and I love working with people. To come up with something that will be a permanent part of their space makes it all the more exciting,” she says. It is obvious that Rebecca does enjoy people and likes learning about others. 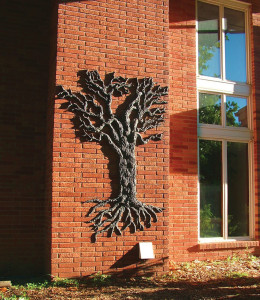 “I have heard the most interesting stories from everyone since we opened,” she continues. “We have had people stumble upon us who were able to give us all kinds of details of what the school was like. It just really makes you wonder about how things were back then. I know that this is going to sound strange, but I have lied down on the wooden floor and imagined all those who have passed through this building and wondered about where their lives went from here.”

It isn’t actually strange to wonder what happened to those who were here before us, just like it isn’t strange to wonder what someone’s legacy will be. However, as Tony aptly points out while watching the cars go by, it’s not up to us to decide. In the meantime, what we do know for sure is that the former Juddville Rural School has another very meaningful chapter in its story.