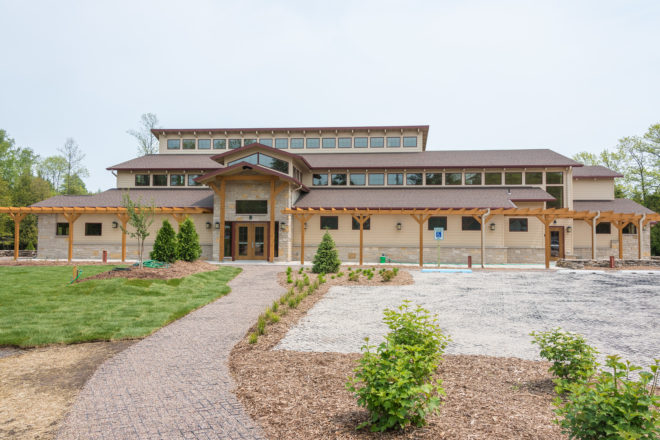 Steve Leonard has a vision for The Ridges Sanctuary that goes far beyond preservation.

The executive director of the 1,600-acre Baileys Harbor nature preserve says it’s time for The Ridges to step out of nature and into the Baileys Harbor community, connecting the two at the intersection of Ridges Road and Highway 57 where the Sandpiper restaurant sits today. 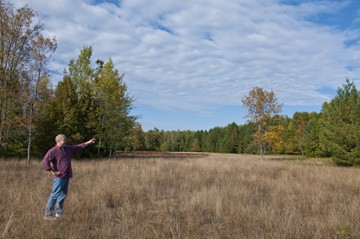 He is leading a campaign to raise $575,000 to purchase the Sandpiper property, which would be followed by a much larger campaign to build an interpretive center that would tie the town and The Ridges together.

With an Oct. 26 deadline looming, he’s $150,000 short of his goal, though philanthropist Ruth Barker just confirmed that she will match, dollar for dollar, up to $50,000 in new donations toward the effort.

If the Sandpiper purchase goes through, The Ridges will embark on a $3 million fundraising campaign to build the interpretive center, new trails, and restore the Range Lights. Leonard sees the 7,000-square-foot, LEED-certified, interpretive center as a gateway to nature.

“It’s not so much about the building, but the building as a launching pad to get people outside,” he says. “We have got to get that next generation involved in nature.”

The sanctuary preserves a series of 30 ridges and swales formed by the continual rise and fall of Lake Michigan over the last 1,400 years. The ridges and swales create the biological diversity the preserve is famous for, and the new initiative would restore and extend those ridges and swales right up to and into the interpretive center, creating what Leonard calls “a screen door to nature.” 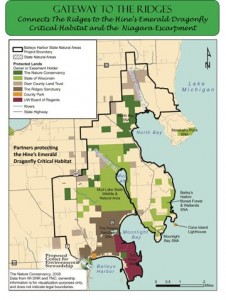 The Ridges could serve as a gateway to other natural areas in the Baileys Harbor area.

A hiking trail would connect The Ridges to the three campgrounds that sit at the town’s edge on County Highway F, with a path winding from the interpretive center on the corner through the 160 acres The Ridges owns across Highway 57 and out to Peil Lane. There would also be a Ridges Discovery Trail and a handicapped accessible interpretive trail loop.

Inside the Upper Range Light, file cabinets squeeze narrow paths between offices and stacks of paperwork lean threateningly over desks and chairs. Outside there is no sign along Highway 57 indicating that this is the home of The Ridges Sanctuary, the state’s oldest private nature preserve. It’s one reason Leonard says that many in the community see the organization as a private club.

“I don’t think many people really understand who we are, and that’s our fault for not communicating our vision,” Leonard says. “The result is that the town hasn’t really been able to embrace The Ridges and use this as a draw.”

“That has been the perception over the years, that people at The Ridges felt it was something that had to be shielded from over-use,” says Baileys Harbor Town Supervisor Peter Jacobs. “But this vision would bring a lot more interpretation of what is going on at The Ridges.” 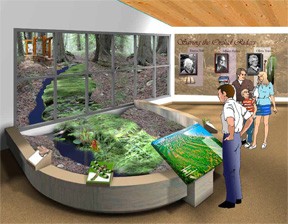 A rendering of the “screen door” that would carry the interpretive center into the ridges and swales of the sanctuary.

Leonard sees a renewed connection to the community as a big part of preserving the future of sensitive places. The Ridges is home to 475 plant species in the most biologically diverse landscape in Wisconsin, but Leonard points out that when it was established in 1937, it was Albert Fuller, the botanist who was most pivotal in saving the area from becoming a campsite, who made the case for a trail system taking people into the heart of the preserve.

“In his notes he asks ‘How is anybody going to appreciate this if we don’t bring them in to see the orchids?’” Leonard says. “If it wasn’t for the trails, it wouldn’t have created the ripple effect. Seventy-five years later, with all the trails we have, it’s still here.”

Leonard believes it’s critical for the organization to embark on a renewed effort to make a physical connection with the community.

“This was the place where everyone went ice skating as kids,” he says. “At some point we took that away, and it became very hands off. It was once a place for kids to explore. We have to get back to that.”

Jacobs said there is naturally some concern in the town about losing a restaurant and taking a property off the tax roll, “but the positive thing is that this could be an attractive, low-impact activity in the town that would bring people in. The town is pretty positive about this.”

The Sandpiper Restaurant on the corner of Ridges road and Highway 57, the proposed site of a new Ridges Sanctuary interpretive center.

Sandpiper owner Donn Valenti has had the restaurant for sale for several years and said he likes what he has seen of Leonard’s plan. “You can tell he’s passionate about it,” he says.

Talking to Leonard it’s clear that passion extends beyond the boundaries of The Ridges.

“As conservation organizations we put ourselves at risk by not supporting these towns,” he says. “We need to step into our community. We can use this to tell The Ridges cultural history, but also tell the Baileys Harbor history. Instead of The Ridges being its own story, and Baileys Harbor being its own story, we can bring them together into one story.”