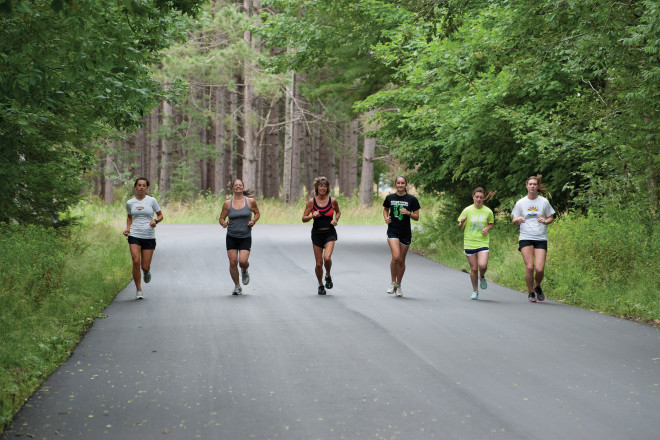 When Cassie Cibik’s résumé and letter of application crossed his desk in 1977, Carl Scholz, then Sevastopol’s superintendent, knew he had a special candidate on his hands for the physical education position he needed to fill. But for Scholz, tracking Cibik down for an interview wasn’t easy – she was off hiking the Appalachian Trail with her stepfather, Oscar Junkans. 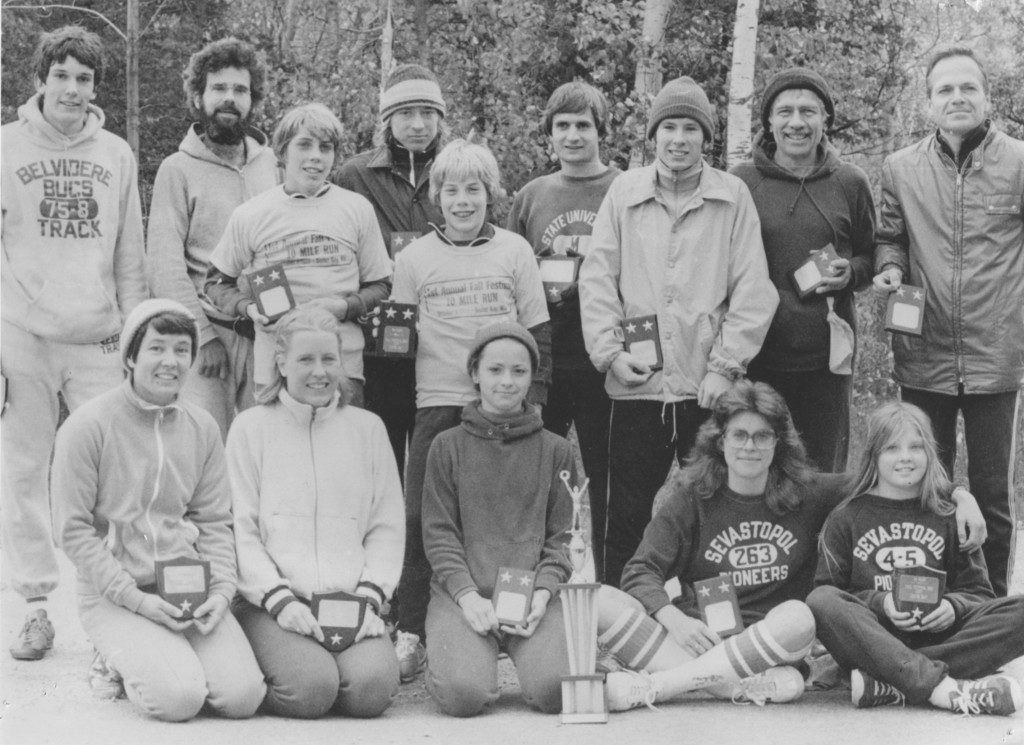 Cibik’s mother forwarded her a message from Scholz with the supplies she sent every two weeks to points along the trail. When Cibik read the letter, she hiked to a country grocery store and called him, asking for two weeks until the interview. While her father continued hiking, Cibik hopped on a flight to Green Bay where she took a shower, bought a dress, and rented a car.

“He had me sign the contract after the interview!” she recalled. She mailed the dress to her mother, bought two T-bone steaks packed in dry ice, and flew back to continue the hike with her father. They ate steak over a campfire to celebrate her new job.

Scholz knew that when he hired Cibik he was finding more than a physical education instructor; he had discovered someone who would model a healthy way of life for his students.

Thirty-four years later that modeling has created a legacy.

“Cassie has become an institution in our school,” said Steve Cromell, her present superintendent. He calls her “the most dynamic teacher/working colleague that he has ever seen” in his 39 years in education. “She provides our students with a model of caring for others coupled with enthusiasm for learning and living life.”

“I was 11 when I met Cassie,” she recalled, “and I knew I wanted to be a teacher. She made me believe I could do anything! She has influenced literally thousands of kids. Exponentially, she has touched an incredible number of people!” 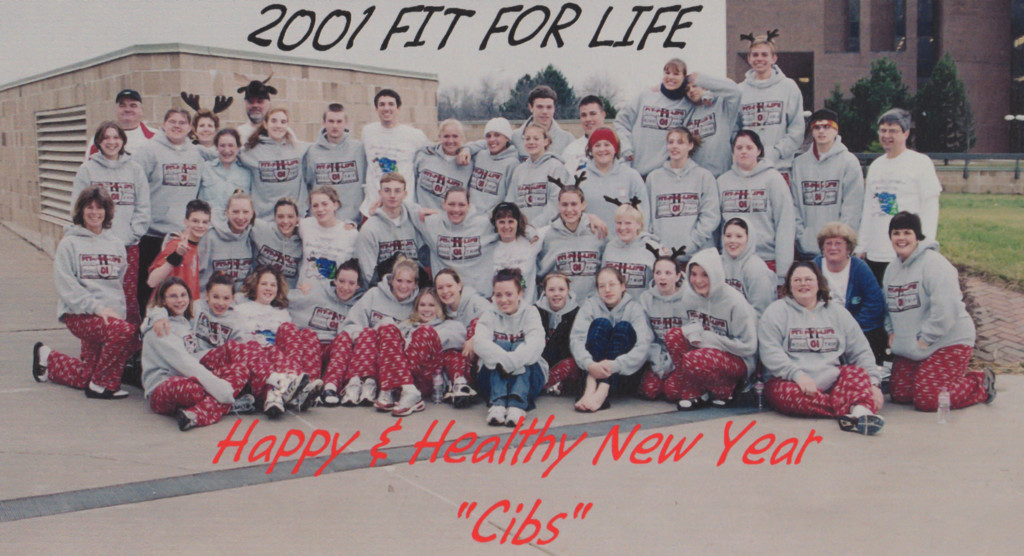 Cassie Cibik-Moeller has influenced thousands of students, like these in her 2001 Fit For Life program.

Ann Smejkal played on Cibik’s 1978 Bay-Lakes Conference champion volleyball team, later became her principal at Sevastopol, and now is principal at Sawyer Elementary in Sturgeon Bay. She called her former coach and colleague “one of the most energetic, creative teachers that I have ever known.”

Now Cibik-Moeller (her married name) is a senior member of the staff at Sevastopol High School. As she sits in her office, fit and trim in her running clothes, surrounded by framed photographs and mementos documenting her career, she doesn’t seemed to have changed much from that young woman Scholz hired.

As a coach, Cibik led her Sevastopol volleyball teams to two state championships. During an award presentation, one of the organizers asked if by any chance she was related to the high school football coach Vince Cibik. “I’m his daughter,” she told him. The man, a retired coach, told her that he had feared playing her father’s Cedarburg team. In 76 meetings, her father’s Cedarburg teams had won 70.

“I kept the Cibik name after I got married so I can still hear those stories!” Cibik-Moeller said. Vince Cibik died of stomach cancer when she was one year old. Her mother remarried, and she grew up in a family of seven siblings.

Young Cibik enrolled at Arizona State, spent a year hitchhiking the country, earned a D in economics, and returned home at the end of the year chubby and undecided. But when she transferred to the University of Wisconsin – Madison she had a physical education teacher, Susie Whipp, “who knocked the socks” off her.

“She was hip – we did cool stuff. Relaxation. Dance.” And Cibik found her career. (Not until later did she learn that Linda Thompson, her English teacher colleague at Sevastopol, was sister to her mentor at UW Madison.) 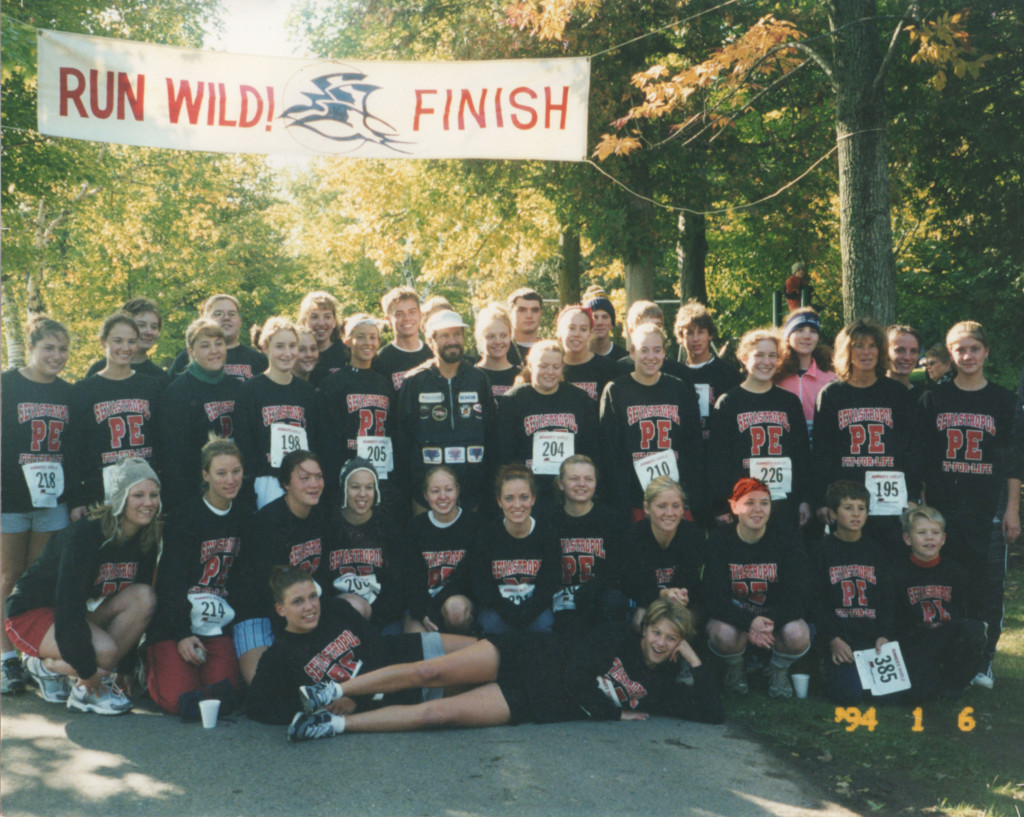 “You have to find the strength in everyone, make everyone feel good about themselves,” Cibik-Moeller says.

Vince Cibik had been a physical education teacher as well, so the career choice seemed fitting. Later she learned that she had many things in common with her father, such as a love of “cannibal” sandwiches and spaghetti. “When I hear wild and crazy stories about my dad from my mom,” she said, “I realize I’m just like him.”

One of the reasons for her success as a physical education teacher is her philosophy that “everyone is an athlete, just at different levels – you have to find the strength in everyone, make everyone feel good about themselves.”

She creates a positive classroom atmosphere, one that allows students to release stress as well as benefit physically from activity. Her program is divided into four components:  Fit for Life, Lifetime Activities, Team Sports, and Weight Training. Within each grouping she offers electives that sometimes take students beyond the confines of a gymnasium or athletic field. For example, one class helps students develop endurance as runners, and then culminates by entering a non-school race.

She includes units on kayaking, mountain biking, and golfing in her curriculum and is known for keeping students on their toes. A class might involve juggling, snowshoes, skateboarding or foosball, among many other non-traditional activities.

Perhaps her most popular sport offering at Sevastopol is cross-country skiing. She has sponsored trips to Ski Brule, organized the ski-snowboard club, founded a ski swap, and maintained an inventory of cross-country skis that students, faculty, and community check out for their personal use.

One of her least traditional units explores bow hunting; in addition to learning archery, students are taught to construct tree stands, to follow “blood traces,” to field dress and butcher a deer (with stands mounted in trees on the school grounds, red food coloring “blood,” refrigerated recent road kill from the sheriff’s department, a demonstration of field dressing by the DNR and processing by a local butcher).

Dave “Chico” Moeller had introduced her to the sport. “I learned to bow hunt because I was interested in him,” she said, and she found not only the relaxation of sitting in a tree stand out in the wild, but also a husband. 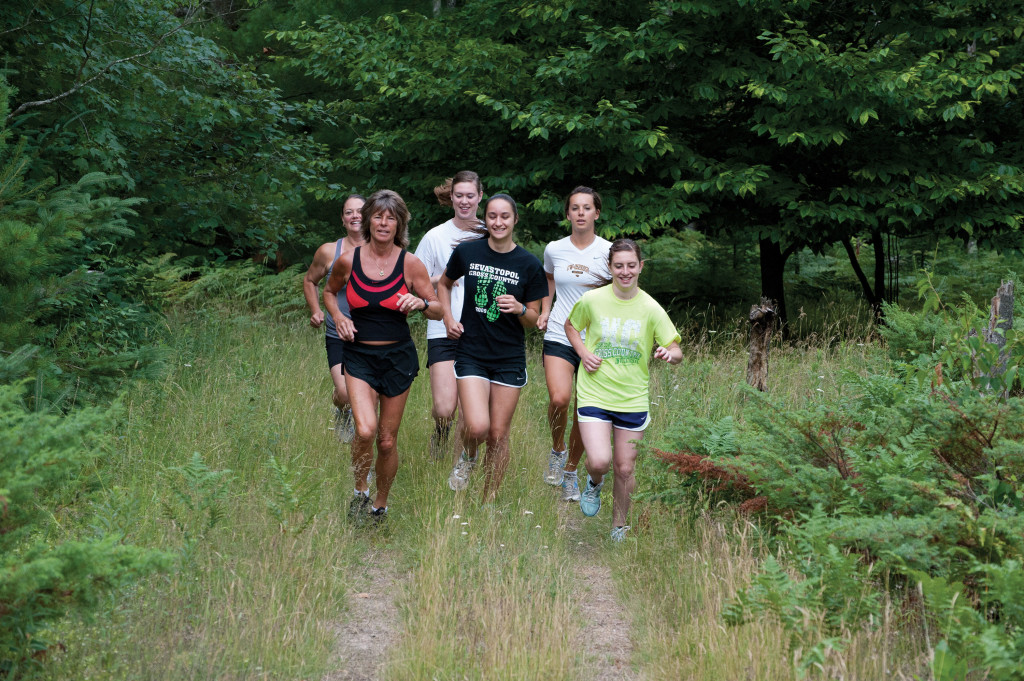 After 15 years “living and breathing” volleyball, she married and began a family. Her husband works as a landscape foreman; her daughter Haley, a high school athlete with three state championships to her credit, is now in college; and her son Max, an accomplished hunter and fisherman like his father, will begin college this fall.

Since her retirement from coaching, Cibik-Moeller “got into my own personal training,” she said, and became interested in competitive running, bike racing, and cross-country ski racing.

Cibik-Moeller’s current principal Adam Baier praised her for showing “Sevastopol students that she cares and believes in them,” beyond the classroom. For example, “without recognition, she will organize a holiday meal for a family in need, pay for a prom dress, or put something extra under a student’s Christmas tree.”

“We’re still good friends,” Scholz said of the new teacher he hired in 1977. He smiles when he recalls the story of the Appalachian Trail, saying “I have the utmost respect and appreciation for her.” As do the many students, staff and community members she has worked with at Sevastopol School.