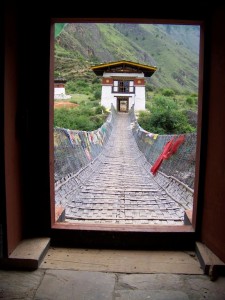 It is often the case that we must look farther afield to learn what we need here at home. A colleague and I recently traveled to Bhutan (that small country between India and China) and learned what a progressive nation is doing to protect its environment.

Bhutan’s environmental policies serve as an example of forward thinking for the rest of the world. A key foundation for Bhutan’s policies is included in their Constitution and requires that 60 percent of the country remain in forest cover for all time to come. His Majesty King Jigme Singye Wangchuck’s goal of happiness sustained by Bhutan’s distinct cultural identity and a pristine ecology has led to an environmental strategy of “treading the Middle Path to sustainable development.” This strategy is being tested to increasing degrees as the pressures of population growth, development, and increased use of natural resources press on the natural areas of Bhutan.

We were fortunate to have met with government officials and local residents to learn about the environmental vision of Bhutan. We also had the opportunity to discuss experiences from the environmental pitfalls and problems in the United States and other countries. Of particular interest was learning more about the cumulative impacts of growth and development from land use that is not balanced with ecological understanding. They don’t want to make the mistakes the U.S. has made.

Along these lines there are important areas of focus as growth proceeds. These include: (1) ecologically sound land use planning, (2) the application of conservation development principles, (3) the use of alternative storm water management practices to protect surface and groundwater, and (4) climate change and global warming. Each of these four areas seeks ecological balance and is discussed here in light of His Majesty King Jigme Singye Wangchuck’s goal stated above.

“His Majesty has learned from other countries that spiritual growth is needed in addition to normal government policies,” Rinchhen told us. “People need clean water and fresh air.”

He reviewed three areas of socio-economic programs: (1) improvements in agriculture and intensification of productivity, (2) development of hydroelectric power using run of the river projects, and (3) modest industrialization.

These programs have direct growth implications regarding the four focus areas we mentioned above. With a projected three percent per year population increase, Bhutan could see a doubling of its population in the next 20 years. This means more houses, more use of natural resources, greater impacts to water and air quality, and the stressing of protected areas and other forested lands.

To prepare for growth and to manage environmental impacts Bhutan has put into place the Environmental Assessment Act 2000, the Forest and Nature Conservation Act 1995, the Mines and Minerals Act 1995, and Land Act 1997. These are some of the most forward-thinking environmental protection policies in the world. Furthermore, the National Environment Protection Act passed in the summer of 2007 is an umbrella act requiring 60 percent of Bhutan remain forestland.

For several days we examined the ecology of mid-Himalayan rainforests in central Bhutan. During that time we met Chief Forest Officer Raling Hgawang Drukdra, and discussed forest management practices that are being designed to achieve sustainability. These aggressive acts and practices are model legislation for many of the developed nations that have poorly managed their natural resources. He wanted us to bring the Bhutan examples back to the United States and use them to help teach our local communities about sustainability.

The people of Bhutan have an intense interest in the application of conservation development principles. These principles address housing and multi-use land development. Conservation developments typically seek to retain greater than 50 percent natural areas within a given development project area. They also include the use of ecologically balanced landscape architecture, planning and management – such as requiring cluster housing, smaller yards, smaller houses, renewable energy, and education in regards to the importance of the environment. Features such as the use of wetlands, green drainage swales, groundwater infiltration spaces, and rain gardens all utilize native plant species, while reducing the use of curb and gutter on roads and local alternative storm water management. An ecological management fund based on money collected on the sale of each home in the development can be used to manage ecological features that protect water quality and quantity and habitats.

As in Bhutan, many parts of the U.S. have yet to learn sustainable water management practices. Advances in alternative storm water management (ASWM) practices are important in achieving sustainable water management. ASWM methods use natural solutions to protect surface and groundwater rather than classical engineering approaches. The alternative practices include narrower roads (less impervious area), streets without curbs and gutters, the use of constructed wetland and forest areas for groundwater infiltration zones, pervious pavements, green roofs, and rain gardens. The goal of alternative storm water management is to manage rainwater where it falls, rather than accumulate it through a storm water sewer system. Infiltration is a key to the success of this approach. The classical designs of using curb and gutters, storm sewers, and storm water detention basins impede groundwater recharge and infiltration. Roof water can also be utilized in native species or organic vegetable gardens called “rain gardens” in individual yards, thereby bypassing the need for additional drains and storm sewer connections. If these methods were consistently used water quality would improve and cost of water management would decrease.

“I have seen in 30 years warmer winters and less snow in Bhutan,” he said. “Some species, such as banana trees, could not survive in Thimphu (one of the major cities) in decades past, but now they survive the winter.”

Rinchhen said he hopes the United States will lead the world in fighting global warming. He viewed the global warming documentary “An Inconvenient Truth,” produced by former U.S. Vice President Al Gore, and said it was so important he showed it to members of his staff. Rinchhen noted that Bhutan is a “Carbon Bank” for the world because of its high percentage of forest preservation, and that “the world should recognize this fact.”

All in all we were very impressed by the environmental policies of Bhutan and there are lessons learned there that can be applied to projects and regions in the United States.