Yes, it’s true and it’s happening right before our eyes. Besides the various establishments that now feature Wisconsin and American craft beers and European beers, there are now two beer festivals –Door County Beer Festival in Baileys Harbor on June 14 and the Egg Harbor Ale Fest on Sept. 20. 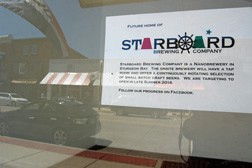 In addition there are Door County’s craft breweries – Shipwrecked in Egg Harbor and Door County Brewing Company in Baileys Harbor, which opens its tap room later this month. A sign on a storefront in downtown Sturgeon Bay says Starboard Nanobrewery will be opening there soon (you can follow their progress on Starboard’s Facebook page). Just down the road in Algoma is the Ahnapee Brewing Co. A.J. Frank of Door County Trolley starts his beer tours next month.

While all of this is exciting news for beer fans, the true beer geeks are salivating at the prospect of the opening of the BierZot Café in Sister Bay next month.

“We’re focusing heavily on Belgian beers, and American craft beer as well. We’ll have a solid 20 to 30 Belgians that we will consistently have all the time, and we’ll be doing a lot of one-off specialty things,” said Brit Unkefer, owner with his wife, Sarah, of the already beer friendly Wild Tomato in Fish Creek.

Their new venture, BierZot (that’s Dutch for “beer fool”), is expected to open mid-June, along with Macho Taco Beach Side Cantina and Taco Stand.

Unkefer said he’ll have 10 tap lines and one beer engine, “So we can do some casks and firkins,” he said. “I’ll probably keep about five of the taps consistent and five one-offs and real specialty stuff that is harder to find. The harder to find stuff where you’re lucky if you can get a case, we’ll do a lot of that. We’ve had a cellaring program that we’ve been working on as well, so we’ll be releasing things like that.”

While the Wild Tomato has earned a reputation for its serious beer list, Unkefer said he has been having a blast researching the Belgian beer scene.

“I know a lot about American craft beer and I thought I knew a decent amount about Belgians,” he said. “Over the last few months I’ve been really diving into it, and I found out that I don’t that much about Belgians. It’s been a really fun learning process for me. It’s kind of addicting once you dive into it because it’s almost endless. What I’ve been noticing, a lot of the European brewers are taking what the American craft beer industry is doing and incorporating some of that, which makes it even that much more fun. Some of these breweries are hundreds of years old, and some new ones doing some neat stuff.”

You do not have to be a card-carrying beer geek to enjoy BierZot Café, Unkefer said.

“It is for everyone,” he said. “We’re also trying to make it educational, too. We had a meeting about it today. If you don’t know much about beer, it’s a place you can come in and learn and try some new things. One of the most unique things about Belgians, they’re all across the board. If you don’t like heavier, boozier beers, you can probably find a Belgian blonde that you will love. Then all the sours and gueuze and things like that. It’s just a totally different realm of beer that’s just starting to get known here. It’s not just for all the beer idiots and fools out there like us.”

If for some unfathomable reason, beer is not your thing, there will also be a wine list, as well as espresso, cappuccino and mostly Belgian-style food offerings, including frites, chacuterie plate, cheese plate, cassoulet, a few sandwiches, salads and crepes.

“We’ll have a couple of TVs in there showing alternative sports like soccer, bicycling, Formula 1, things like that,” Unkefer said. “We kind of look at places that we would want to go to. I love Husbys and all those places, but I would never ask them to put a soccer game on there. I would not do that. But with the World Cup coming up this summer…”

So, yes, I think Door County can officially add beer destination to its many other reasons for attracting people to the peninsula.