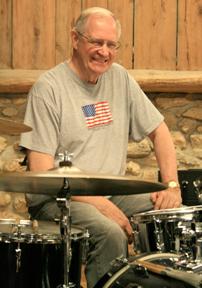 The Birch Creek Academy Big Band is one of many big bands still performing music that became popular during the Swing Era. Over the years, Birch Creek faculty members have toured or recorded with many of those well-known bands.

If you listen to late-night jazz radio, you might hear the name of a Birch Creek faculty member during the introduction to a big band selection about to be aired. Or, a celebrity singer might stop in Green Bay on a nationwide tour, backed by a jazz band that includes a faculty member from Birch Creek.

One of those musicians is drummer Bob Chmel. Bob Chmel has been coming to Birch Creek for 18 years, excluding the years he has been on tour. Chmel’s tour travels have taken him to other continents and across the country without so much as a lost drumstick. It’s getting to Birch Creek that has proved to be challenging.

Bob lives in Las Vegas, and left for the 1,963-mile trek to Egg Harbor in a ’95 Lincoln with 159,000 miles on it. He made it 289 miles to Richfield, Utah, before the Lincoln began to overheat. “I pushed on for another 150 miles or so until I reached Thompson Springs (Utah),” Bob recalls. He has an excellent memory, especially for numbers. “Then I was towed 75 miles to Grand Junction, Colorado.”

After an unplanned night in a motel, Bob was staring car repair straight in the eye on a Saturday in a town where no one knew him. “But the mechanic, Rick, was a musician. He had been a guitar player and opened for some pretty big acts. So he treated me really well. My radiator was shot and Rick replaced it all – hoses and everything – for $675, on a Saturday!” Bob made it to Birch Creek late Sunday night, in time to take his place behind his drums when the jazz students and faculty arrived on Monday morning.

That’s not the only trouble Chmel has encountered on the long road to Birch Creek, prompting bandleader Jeff Campbell to laugh and say, “We’re thinking of starting the ‘Bob Chmel Mishap Award’ for the most trouble encountered coming to Birch Creek.”

Chmel jumps in. “But we’re still figuring out a point system.”