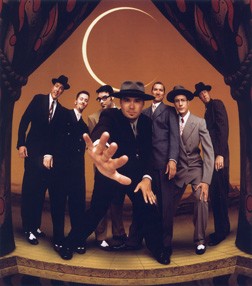 On July 19, Big Bad Voodoo Daddy will bring their modern, high-energy brand of big band swing to Door Community Auditorium (DCA). This nine-man ensemble has forged a one-of-a-kind musical fusion from jazz, swing, Dixieland, and big band music, building its own songbook of infectious original dance tunes. With appearances that range from the Swingers soundtrack to the Super Bowl, Big Bad Voodoo Daddy has become an American fan favorite.

Although music by other composers has been featured on each of the band’s albums, Big Bad Voodoo Daddy has always focused on original music, producing a diverse repertoire of original hits. The band’s originals rocketed the group into its first phase of stardom when You and Me and the Bottle Makes Three (Tonight) and Go Daddy-O were featured in the 1996 landmark indie film Swingers.

Their music has appeared in countless films in addition to Swingers and has been widely used for television broadcasts of sporting events, including NFL, NBA, MLB, and PGA broadcasts.

Big Bad Voodoo Daddy will perform at DCA on July 19 at 8 pm. Tickets range from $22 to $44. Advance reservations are recommended and can be made through the DCA box office, located at 3926 Highway 42 in Fish Creek. The box office is open Monday-Friday, 12-5 pm. Tickets can be purchased in person, on the phone at 920.868.2728, or online at dcauditorium.org.