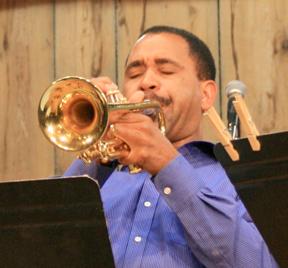 Birch Creek’s Academy Big Band is composed of professional musicians and educators from New York to Las Vegas and places in between. Burgeoning and established jazz stars meet inside one of their favorite performance venues:  the historic Dutton Concert Barn on the Birch Creek campus.

Jeff Campbell returns for his 21st year, and his 13th as Academy Band leader and Program Director. Campbell recruits the world-class professionals who teach and perform at Birch Creek. Members of the Academy Big Band have played with the Count Basie Orchestra, the big bands of the Dorsey brothers, and such celebrated names as Frank Sinatra Jr., Jerry Lewis, Dizzy Gillespie, Mose Allison, and Marian McPartland. They have a unique summer gig in Door County:  they perform on Birch Creek’s stage at night and teach promising young musicians from across the country during the day.

With two CDs to its credit and years of playing and teaching together, the Academy Big Band at Birch Creek is an annual summertime tradition for Door County residents and visitors alike.

Birch Creek’s Big Band series runs from July 22 through August 21. Check out the concerts on July 24 and August 7, when a section of the barn will be cleared for swing dancers to move to their favorite Big Band hits.

All Birch Creek concerts begin at 8 pm. General admission tickets are $29 for adults, $10 for young adults ages 12 – 20 as well as college students, and $6 for children 11 and under. The box office opens at 7 pm, with pre-concert music in the campus gazebo beginning at 7:30 pm.