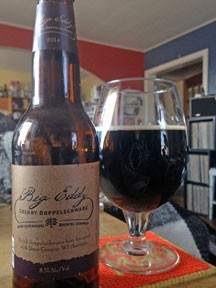 The latest one I ran across is a beauty – Big Eddy Cherry Doppelschwarz.

What a brilliant idea, first to make a double dark lager, and then infuse it with Door County cherries. The flavors were meant to be together.

German Schwarzbiers are delicious, soft, dark, malty lagers. This is the first Doppelschwarz I’ve seen, which just doubles all the best qualities of Schwarzbier.

Prepare yourself for a pleasing blast of chocolate and coffee, a hint of vanilla, and tart cherries. To me, that’s a recipe for a smile with each sip.

Rooting through the fridge, I find a treasure in its uncharted depths – a 2014 Sierra Nevada Bigfoot Barleywine Style Ale. I had forgotten all about it. What a pleasant surprise! 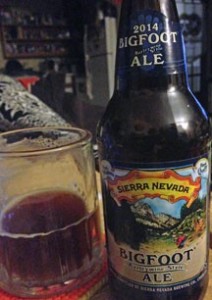 Rich, sweet, hoppy, but balanced in a way that each new nuance takes its turn, steps on stage, bows deeply, and leaves a big smile on your face. Who could ask for more?

This is a legendary beer, one of the first craft big beers made for mass distribution. I recall when it made its way into northeastern Wisconsin back in the early ’90s. A place I frequented was expecting a limited amount – I forget how much, but no more than several cases. The place opened at 3 pm and I stopped in shortly after that to have a Bigfoot. It was everything I expected. I left and don’t remember what took place. What I do remember is that I went back for another Bigfoot that evening – say 9ish – and they were gone…until the next year.

Things have changed so much since then. Whatever beer style crosses our mind is now available at every smart retail outlet.

I wish I would have had the foresight to put away some Bigfoots, but I don’t have foresight, or is it discipline that I lack?