A row of 46 men line up across from the American flag whipping in the east wind as the national anthem floats from the speakers in Baileys Harbor. Their dark blue jerseys match the logo painted in the grass at the 50-yard line. As the last verse rings, they lift their helmets with choreographed unison and let out a cry deserving of their name. The Door County Destroyers began their playoff run.

It was a hard and fast journey to the playoffs for the Destroyers, who entered the Wisconsin State Football League in 2013. The team faces off against opponents throughout northeast Wisconsin. In their first year as a semi-professional team in 2013, the Destroyers won six out of their 10 games before losing in the first round of the playoffs. This year, the staff and owners put in extra hours to ensure they were putting the best players on the field every week. 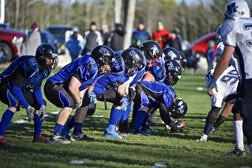 “We were very picky,” said Head Coach Jaime Flores. “We were only going after talent that would also fit in with what we teach.” Flores came to the Destroyers at the end of the 2013 season after three years as the defensive coordinator of the Manitowoc Mariners. Owners Shane Hills, Ryan Zuehlke and Chris LeCloux approached him for the Destroyers inaugural season but Flores felt he still had work to do in Manitowoc. When asked again at the end of 2013, Flores moved up to take the head coach position with the Destroyers.

With nearly a full year before the 2014 season, the team quickly got to work. They held practices once a week, both outdoor and indoor during inclement weather, and players would often visit Flores at his home in Madison to review plays in preparation for upcoming games.

The team’s roster comes from throughout Wisconsin, with each player commuting to practices and games every week. A few players from Eau Claire, a running back from the Twin Cities, and several others from throughout northeast Wisconsin all come to Baileys Harbor to play together 10 months out of the year.

Yet there are a few who do not have such a long commute. “We have guys from Door County, guys who played at Gibraltar,” said Flores. The small town community-feel of the area helps the team’s support stretch throughout the county. Flores admits how lucky they are to have Baileys Harbor take care of “one of the best grass fields I’ve ever been on,” while visiting players often tell him it is the best field in the league.

As their fan base grows, the team hopes to integrate into the community even more. “The people in the community, they know the players and the coaches like they’re neighbors,” said Flores. With that integration comes a responsibility to represent Door County both on and off the field.

After their success on the field this season, finishing in first place with a 9-1 record and making a strong run toward the championship, the Destroyers hope to make the organization more attractive to players from around the county. With local players come local support and a potential fan base that cities such as Manitowoc and Sheboygan lose sight of with a big population.

The opening playoff game against the Manitowoc Mariners brought nearly 200 supporters to a sunny day in Baileys Harbor. The bare surrounding trees blocked most of the cold wind but blankets covered the bleachers, with shades of dark blue Destroyer sweatshirts poking up beneath them. Men and women, young and old, covered the home team side while a few dozen Mariner fans dotted the opposite sideline. 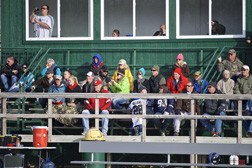 Flores called his team together and each word became a monologue to the spectators, sitting in the stands 15 yards away from the player’s bench and anxiously awaiting another win for their home team. The Destroyers topped the Mariners earlier in the year but were coming off of their first and only loss of the season.

The kicking team headed onto the field while they exchanged waves and hollers to the spectators, who responded with a familiarity not found in the professional leagues. As Flores hoped, the players knew their fans and the community feeling was not lost throughout the game. Young kids played catch with a benched player on the sideline while a man in the stands rattled off the statistics of his favorite players as if they were featured on ESPN earlier that day.

As helmets clashed in the huddle and music powered over the loudspeakers, the fans in the bleachers whispered to each other, “There’s a whole different energy to this game.”

Players were quick to vocalize both their excitement and frustration at each snap of the ball. Yellow penalty flags plagued each team’s offensive drives due to what was described as “playoff-weary referees.” Between big plays and tough penalties, the ball moved forward and backward on the field. Every grunting tackle and play call was heard over the cheers from the sideline as the Destroyers took an early lead.

The Mariners soon responded with a breakaway run into the end zone and the defensive coordinator ordered his men to the bench. “One of you touched him but we’ve got to wrap him,” said the coach while he wheeled his arms in a wide circle as if hugging a tree. “We’re better than these guys.” 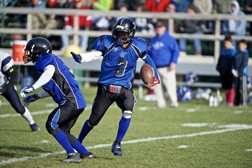 The coach was right that day as the Destroyers defeated the Mariners 24-7 to move on to the championship game against the Sheboygan County Rebels. The Rebels knocked the Destroyers out in the playoffs in 2013, forcing a heated rivalry between the top two teams in the league.

No matter the outcome for the 2014 finale, the Destroyers look to capitalize next year on their successful season as they increase recruitment efforts, sponsorship relations and community support for what has become one of the premier athletic programs on the peninsula.

The championship game will take place at 2 pm on Saturday, Nov. 8 at Valders High School in Valders, Wis.