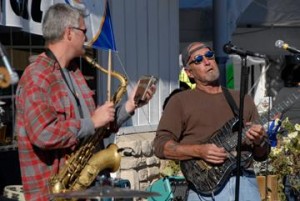 The Door County stalwarts formed in 1980 in Flint, Michigan, around Jay Whitney. With a style based on an assortment of blues, jazz and original songs, Big Mouth gained momentum playing at clubs and festivals throughout Michigan but lost steam when a few of its members left the group to tour with other bands.

In 1989, Whitney moved to Door County and Big Mouth reformed the following year, with Whitney on guitar and vocals, Paul Sowinski on bass and vocals, Pat Judy on drums, and Woody Mankowski on the saxophone. The new group proved popular, playing shows in Door County and Green Bay, and soon added “The Power Tool Horns,” a montage of brass musicians that gives the band a new sound.

Though Big Mouth has lost some of its members along the way and gained others, they’ve been consistent in delivering fans a gritty mix of blues, jazz, rock and country, and the addition of the Power Tool Horns gives great flair and swing to their songs and live performances.

July 16 – Concert in the Park, Algoma