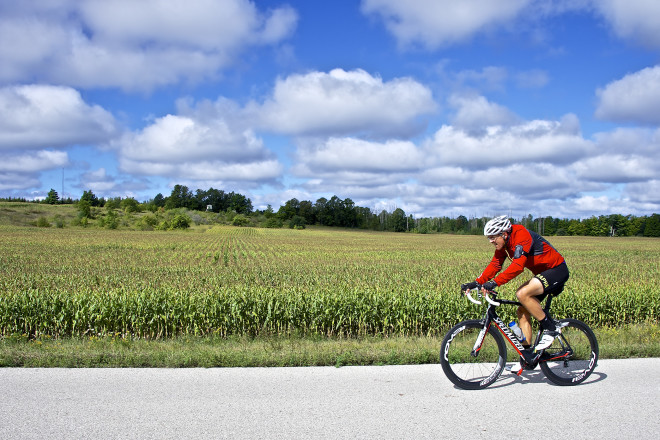 Last night I nearly hit a bicycler as I was driving through the north end of Ephraim at about 9:30 pm. He was riding on the narrow shoulder, likely a seasonal employee heading home from work. He didn’t have a light on his bike, and he wasn’t wearing a reflective vest or clothing, which annoyed me. 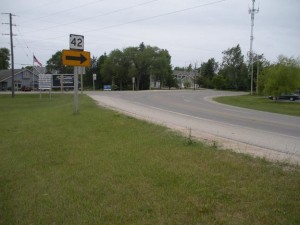 Like most drivers, I’m prone to getting frustrated with bicyclists – but for different reasons. When I see them riding on a sidewalk, going against traffic, or not wearing a helmet, it ticks me off. I bike as much as I can, and when people don’t follow the rules of the road it gives all us bikers a bad rap, making it more dangerous for all of us to ride.

But in a vacation destination, we get a lot of people who only ride a few times a year, and without direction, they are bound to make mistakes and get confused. Unfortunately, when you bike in Door County that direction is hard to come by.

The entire peninsula has only a few marked bike lanes, and only tiny rusted signs on back roads mark our bike routes. There are no road markings, little signage, and no shoulders on many important corridors. The absence of such signs and markings means drivers are less aware of the rules of sharing the road and the presence of bikers as well, making a dangerous situation for both parties.

In a place like Door County, where drivers are so often distracted by orchards, water, and goats on rooftops, it’s even more important to provide wayfaring information.

Wider shoulders, street markings like sharrows, signage, and connecting routes between communities would improve safety immensely, and go a long way toward bolstering the peninsula’s reputation in the biking community. Cycling is a rapidly growing sport and a great way to experience Door County. With our scenery and mix of rural beauty with shoreline and village centers, Door County should aim to be mentioned among the best places to bike in the country.

Gibraltar, Liberty Grove, Baileys Harbor, the Village of Egg Harbor, and Sturgeon Bay deserve credit for taking the first step by committing to finishing comprehensive bike plans. This will allow them to incorporate plan components into highway resurfacing that is coming around again in some communities as soon as 2013. Conspicuously absent from that list is Ephraim, the vital corridor connecting Fish Creek and Sister Bay that, if it planned for it, could become a safer link between the two Northern Door communities. Lane markings, wider shoulders in spots, and signage would go a long way toward making Ephraim a safer place to ride, drive, and walk.

We need to diversify Door County’s visitor base, and there is a lucrative market of cyclists waiting to be introduced to Door County. Getting the attention of readers of magazines like Bicycling, Silent Sports and the like will help take us beyond cherries, fish boils, and goats.

A modest investment in bike planning, signage, and lane markings that require a touch-up every few years is one of the most economical investments we can make in our tourism future. Plus, it’s something we should do for ourselves, to make a safer environment for our kids, our cyclists, and our drivers.

It’s time we got it done.