Door County’s tourism economy has plateaued, but the Door County Silent Sports Alliance (DCSSA) believes there are powerful niches that can be exploited for new economic growth.

Likewise, Door County Board Supervisor and cycling advocate Ben Meyer is working feverishly to get bike route planning funds restored to the state budget so work can continue on a county-wide comprehensive bike plan. 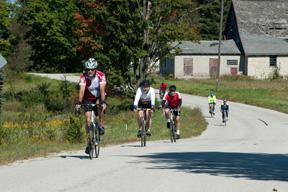 “Other destinations build water parks,” he said. “We can build an infrastructure that would make Door County one of the premier destinations for biking in the United States. In a county where more than 25 percent of residents have tourism-related jobs, this grant is a relatively small amount of money that could go a long way.”

Meyer and the DCSSA aim to create a plan that connects all the county’s communities as well as points of interest such as state and county parks. Last year Door County was awarded a $100,000 Federal Transportation Enhancement Grant to create the comprehensive countywide bike plan. The grant was later shifted into a state program, however, and state funding for bike and pedestrian plans was axed in the latest biennial budget.

“The grant can’t be rescinded,” Meyer said, “But it could be a long delay.”

At Door County’s mini legislative days May 17 and 18, he and other advocates will urge officials to either reinstate the $2.5 million in state funding for bike and pedestrian planning, or transfer Door County’s grant back into the Transportation Enhancement pool of grant funding.

Meyer said his case is centered on the job creation and the tourism impact that bike routes could have in Door County, which is also the focus of the DCSSA’s 3rd annual Door County Bike Summit coming May 20 – 21.

The event will feature group road and trail rides and networking opportunities, but the thrust of the weekend is to illustrate the economic impact that bicycle infrastructure can have on a community. Cycling advocate Scott Chapin of Hayward, WI will present the results of an economic impact study that he hopes will go a long way toward clearing up misconceptions about bikers and other silent sports enthusiasts.

“This is not just the Mountain Dew crowd on the trails,” Chapin said. “This is a high-income group. Studies have shown that about half of all cyclists have household incomes over $100,000. At least 40 percent of participants in the annual Chequomegan Fat Tire Festival [an off-road bike race that draws 2,750 riders annually] are between 35 and 49 years old, so we’re not talking about a group of cheap 20-somethings that don’t spend money.”

Cycling-related spending in Wisconsin totaled $925 million in 2009, an amount exceeding hunting-related expenditures. Of that, 57 percent was spent by out-of-state residents.

“We’ve found that people will travel to bike if the infrastructure is there,” Chapin said. “We see that a ton in northwest Wisconsin, where we have one of the best trail systems not only in Wisconsin, but all of North America.”

The economic impact of silent sports extends beyond bike shops and repairs. In Hayward, Chapin said the most successful real estate developments are those with access to trail systems marketed to the active crowd. That echoes a national trend that has emerged over the last decade in which homebuyers have increasingly cited trail proximity as one of the top drivers in home-buying decisions.

The old logging towns of Wisconsin’s northwoods have re-branded themselves over the last two decades as sustainable silent sports destinations. Chapin said the Chamber of Commerce has jumped on board to market them as such, drawing energy and visitor dollars to the area.

“Hayward isn’t close to anything,” he said. “We’re three hours from Minneapolis, so we have to be a destination. The chamber realizes that this is the future of our area, and Northern Door County is similar.”

Also at the Door County Bike Summit, Kevin Hardman, executive director of the Wisconsin Bicycle Federation, will talk about what communities are doing around the state and provide an update on lobbying efforts in Madison.

“We’re working on something we call Vulnerable Users legislation,” he said. “Essentially, there are a lot of legal users of the roadway that are vulnerable out there, but there’s a gap in the law. When people hit and kill a bicyclist it basically results in a traffic ticket.”

The legislation would stiffen penalties, require a court appearance, and provide for driver education about the rights of cyclists to the roadway.

“There’s a huge need for education,” Hardman said. “The Bike Federation is rolling out a statewide campaign to educate car drivers, bike riders, and law enforcement about the rights of vulnerable users as well as how those users should operate safely on roads.”