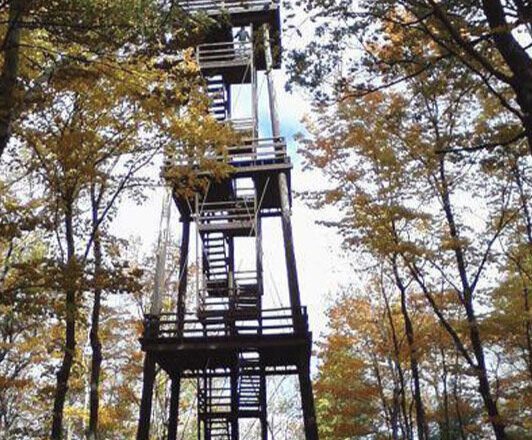 Rep. Joel Kitchens (R-Sturgeon Bay) has introduced a bill that would fund the repair of the Potawatomi State Park Observation Tower.

LRG-4689 would direct the governor to use up to $750,000 in federal American Rescue Plan Act (ARPA) funds to restore the historical structure. Kitchens introduced the bill Monday, with Sen. Rob Cowles (R-Green Bay) and Sen. André Jacque (R-De Pere) as the first and second Senate leads.

“We are proposing this legislation because we would like to get the process moving as fast as possible,” Kitchens wrote in a memorandum to all legislators seeking co-sponsors. “Many local experts are worried that if we don’t start repairing the tower very soon, additional rot and decay will make it impossible to save it.”

The money would come out of the $3.2 billion in federal funding that Wisconsin has been allocated under President Biden’s American Rescue Plan Act. Gov. Evers controls how that money is spent. To date, he’s allocated $892.6 million of it, according to a July 21 Legislative Fiscal Bureau memo to all Wisconsin legislators.

“Using ARPA funds for this project is ideal since the governor has already allocated a portion of these dollars to boost the state’s tourism industry,” Kitchens said.

The tower was listed on the National and State Registers of Historic Places during the past year specifically because of its historical association with outdoor recreation in Door County, as well as its architectural significance: Built in 1931, it was the first tower constructed in a Wisconsin state park specifically as a tourist attraction. Ever since, the iconic attraction has drawn many visitors to the park.

Kitchens has also asked the Department of Natural Resources (DNR) to provide its long-range plan for the property as required under Wisconsin statute 44.41 for all properties listed on the State Register. That statute indicates the plan “shall, to the greatest possible extent, result in preservation of that property.”

The plan is under development, according to the DNR’s response to Kitchens.

The tower has been permanently closed since spring 2018 following the DNR’s discovery of decay. The agency announced in early 2020 that it would demolish the structure because it couldn’t be repaired without providing ADA accessibility, and providing that was unfeasible. That assertion has since been refuted.

The demolition plan came after the Sturgeon Bay Historical Society Foundation (SBHSF) had hired senior engineer and wood technologist Dan Tingley, PhD. He determined that repairing the most deteriorated of the structure’s Western red cedar timbers was possible for roughly $250,000.

The Wisconsin Department of Administration (DOA) did an assessment of Tingley’s report in January 2020. It validated Tingley’s repair but listed other repairs needed, such as replacing stairs and guardrails. Tingley said those were maintenance items and had nothing to do with preserving the tower’s structural integrity, but the DNR did not alter its position.

Then in May, Gov. Tony Evers reserved $5 million for historical renovation and ADA accessibility of the tower in a legislative package that had a condition: If the Legislature met in special session to talk about Medicaid expansion, the tower repair and other projects around the state would be funded.

The Republican-controlled legislature, long opposed to Medicaid expansion, gaveled in and out without taking any action. During that same week in May, DNR Secretary Preston Cole met with Kitchens, Jacque and two Sturgeon Bay residents: Christie Weber, president of the SBHSF board; and Kelli Catarozoli, SBHSF treasurer. According to all four, Cole said the DNR decided to repair the tower rather than demolish it and that its decision was not contingent upon the governor’s Medicaid-expansion legislation.

“I put my skepticism aside and went forward in good faith” from that meeting, Kitchens said in an email to Sean Kennedy, legislative liaison with the DNR. “Your team expressed no concerns whatsoever in the plans of Dr. Tingley, other than that you thought it would be more expensive than his estimate.”

Jacque, Catarozoli and Weber all confirm they heard the same thing from DNR Secretary Cole. The DNR has never confirmed publicly what it said during that meeting and has not responded to questions posed by the Peninsula Pulse.

“They understood the urgency of the repair, and from that conversation came an action plan,” Catarozoli said.

That action plan involved Jacque getting the project green-lighted by the State Building Commission, the state agency that must approve all building projects that cost more than $300,000. Jacque, who is a member of the commission, told the Pulse in May that he’d done what he needed to do to get the project on the agenda.

Then came the announcement in August that among the $92 million worth of projects the commission had approved, the tower wasn’t among them. The DOA hadn’t even put the tower on the agenda.

In an email chain received by the Pulse, Bill Cosh, a policy adviser for Jacque’s office, questioned where the hangup was between the DOA and the DNR and asked for the governor’s office to intervene.

“As we discussed during our meeting with Sen. Jacque and Rep. Kitchens, and as I reemphasized during our most recent conversation, the DNR does not feel the documents you provided are biddable, nor do they address the structural issues outlined in the previous DOA study,” the DNR’s Kennedy said by email. His response caused a strong reaction from Kitchens, who wrote back that the “blame-shifting” was wearing thin.

“The DNR committed to repairing the tower and, after reviewing Dr. Tingley’s report, finally acknowledged that repair was possible,” Kitchens wrote. He continued that the DNR “is the trustee of an historic structure that belongs to the people of Wisconsin. You have admitted it can be repaired, so do it. If this tower is allowed to rot to the point where repair is no longer possible, the administration bears full responsibility.”

Late Tuesday, Jacque’s communications director, Matthew Tompach, received a response from the DOA that he shared with the Pulse.

“There is still more work to be done on this project to get to a consensus to put forward a biddable project proposal before DOA can move forward with anything,” wrote Carly Michiels, DOA legislative adviser.

Neither the DNR nor the governor’s office responded to requests from the Pulse for this story.

The deadline for co-sponsorship of Kitchens’ bill is Friday, Sept. 17. As of the Pulse’s deadline Wednesday, four legislators had signed on to the bill.

Tompach said Wednesday that he and Kitchens’ office are in the process of scheduling a meeting with the governor’s office.