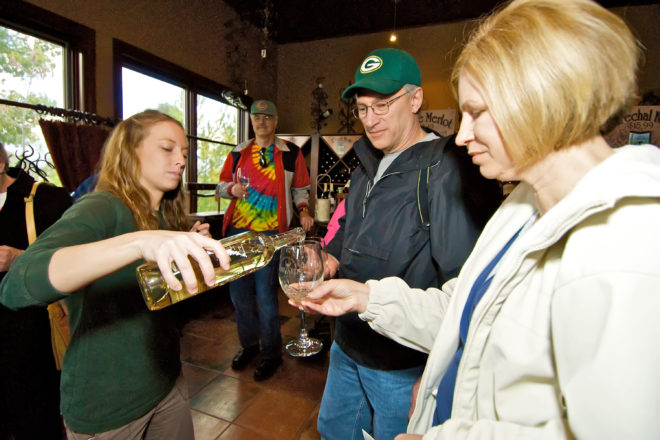 Owners of Wisconsin’s wineries are hoping this time is the charm for a bill introduced again this session that would allow wineries to serve wine until midnight, rather than having to stop serving at 9 pm.

As the law stands now, wineries must stop serving at 9 pm, but many would like to be able to serve later for special events such as weddings.

A similar bill failed in 2015, with opposition coming from the Tavern League of Wisconsin and the Wisconsin Beer Distributors Association. Both groups oppose the bill this time as well, saying wineries are manufacturers in the three-tier alcohol system (manufacturers, distributors and retailers) followed in Wisconsin, and that passage of the bill allows them to be retailers as well, in direct competition with established purveyors of alcohol.

In a Facebook post about the 2015 legislation, the Tavern League said this:  “There is a reason this is not legal today – because it is patently unfair to retailers and would adversely impact business. Imagine Anheuser Busch or any other manufacturer as your competition for retail business – not fair which is why it is not legal.”

“There’s a lot of stuff about the three-tier system that is really challenging for us as small wineries and small businesses,” said Carrie Lautenbach-Viste of Lautenbach’s Orchard Country Winery & Market in Fish Creek. “If you do look at the playing field, it is definitely not a level playing field. We’re trying as an industry to get some things done, so I’m hoping this happens.”

Lautenbach-Viste said the member wineries of the Door County Wine Trail discussed the legislation at its last meeting.

“Of course the wineries here in Door County are in support of the Wisconsin Wineries Association as a whole and them wanting to pursue that,” she said. “It will be nice for any of the wineries that do wish to either have an event or a wedding at their winery and be able to sell and serve until the reception is over.”

However, she doesn’t think it is as much of an issue in Door County as it might be for isolated wineries in rural areas in other parts of the state.

“We do get requests to hold events, however, a lot of the wineries in Door County are pretty fortunate because we have great tourism traffic flow, whereas the smaller wineries in rural areas are definitely affected more so in the sense that if they could have the opportunity to bring in a big event or wedding, it will be more beneficial for them,” Lautenbach-Viste said. “We do have an event room here. At this point we haven’t been renting out too much for weddings. We’ve had a few small parties, but this would be a nice opportunity for us as a winery if we wanted to pursue event planning more, we would have that option.”

“I’m in favor of it because I think it’s a good thing, but we don’t plan to do much after 9. These guys want to hold weddings and stuff at the wineries, so I’m for it.”

But as the owner of multiple licenses and restaurants, Pollman is concerned about some other three-tier measures that he finds restrictive to business.

With a ten-fold increase in wineries from the turn of the century – from 13 to around 130 – Lautenbach-Viste said the industry is trying to develop some political clout like that of the Tavern League.

“I think definitely both the Wisconsin Winery Association and Door County Wine Trail and a lot of the other groups are definitely more on one page now and we’re all trying to work together to have a bigger presence,” she said. “There are a lot of times we come up against certain groups who think we’re somehow cutting in on their territory. We’re hoping that if we all kind of stick together and show the state what kind of economic impact we’re having on the state, some of these bills and legislation that we’re trying to get passed will hopefully come to fruition. It’s something that we struggled with over the last 10 years. We definitely are working a little bit more closely together in trying to improve our power, if that’s the word, or getting legislators to listen to our group and see that we do have a big economic impact on the state and that we should have a little say in the legislation as well as the tavern league and other groups.”