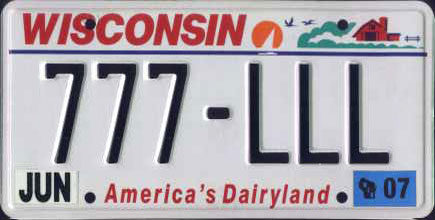 Last month we reported on the suggestion by Kurt Bauer, executive director of Wisconsin Manufacturers & Commerce, that Wisconsin has outgrown the “America’s Dairyland” slogan seen on state license plates and that perhaps time has come to update the state’s image.

He suggested the state motto “Forward” would be better suited to 21st century Wisconsin.

Waukesha Representative Scott Allen is seeking legislative support for a bill to redesign the state’s motor vehicle registration plate without the lawfully required “America’s Dairyland,” which first appeared on state plates in 1940.

His bill calls for the Wisconsin Department of Transportation to contract with an art education association to conduct a contest for high school students in 2018 to redesign the registration plate. The art education organization would choose the finalists and the Governor would select the winner, who would receive a $1,000 scholarship.

The bill requires registration plates to display the design chosen through the contest, which would begin being issued in July 2019.

In a Nov. 2 letter seeking support for the bill from legislative colleagues, Allen wrote, “License plates should reflect who we are, not who we were. Our national advertisement should reflect where we are going as a state and not where we have been.” He also pointed out that more than 88 percent of Wisconsin’s labor force works in businesses unrelated to agriculture.

Allen also wrote that since a license plate update would attempt to portray the state’s image for the future, “Then it seems far better to let the next generation be engaged in, and responsible for, the new license plate design,” hence the statewide high school art contest.

“The words ‘America’s Dairyland’ are not required to be used, but are not prohibited from consideration either,” Allen wrote.

“By 2020 people in Illinois and Ohio and Missouri will be stretching their necks to see the fantastic new license plate on the road and they will think to themselves, ‘Wisconsin, hmm, I’ve got to check that place out’,” Allen wrote to his colleagues.

Checking in with Allen’s research assistant Dan Hubertus to the reaction of the legislator’s bill, he said, “We have received very positive feedback from the community and across the state.”

But not from the Diary Business Association, which responded to Allen’s bill with a Nov. 3 letter to members of the legislature from DBA President Mike North, who said they should oppose “this ill-conceived measure.”

“The use of the slogan ‘America’s Dairyland’ for nearly 80 years is a recognition of our past, the important role that dairy continues to play in our state and culture, and what the future holds for the most innovative farmers and processors in the world,” North wrote.

He maintains Wisconsin remains “America’s Dairyland,” with a $43.4 billion impact on the state’s economy and tens of thousands employees in urban and rural Wisconsin.

“We have a brand,” North wrote. “It is viewed positively by the overwhelming majority of people. We have spent more than a century and a lot of effort and money to create this brand. It does not make sense to back away from it. At a minimum, we should be quietly thankful. Even better, we should do more to strengthen our brand. Therefore, at a minimum, we ask that you oppose this proposed legislation. Even better, let’s get creative with what the Legislature can do to further strengthen our strong and dynamic dairy community.”

What do you think? Is it time for Wisconsin to reposition itself with a new license plate motto or should we continue to represent ourselves as “America’s Dairyland,” even though California has held the title of top dairy producer since 1993, first in the nation as producer of milk, butter, ice cream and nonfat dry milk, and second to Wisconsin only in cheese production?

Let us know at [email protected] what you would like the state’s license plate slogan to say about us.